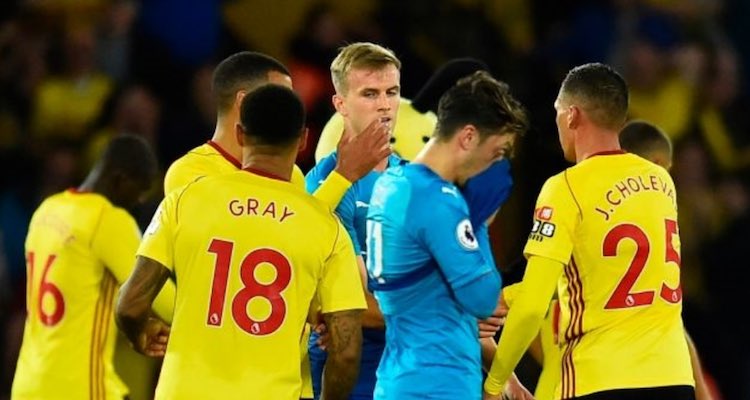 Morning all. Thankfully the storm yesterday was not as damaging in this part of Ireland as it was elsewhere, but three people lost their lives due to the conditions so it was a pretty serious event elsewhere. The roof of our dodgy extension seems to have stayed on too. Anyway, we’re up and about and the day lies ahead.

As you would expect things from the club point of view are quiet. Media lock-down once more, for the most part, beyond some briefing against Mesut Ozil who is the scapegoat du jour for what happened at Watford. Yes, he should have scored, and yes it would have given us a more comfortable position in the game, but our failure on the day was collective rather than individual.

Some point to his introduction against Watford as a turning point, but in truth it was the penalty that changed the game. Ozil had created a great chance, and missed a great chance, but as soon as Richarlison took that dive and the referee bought it the momentum shifted.

I don’t have any real faith that the German is going to sign a new deal, and to be honest I’m not sure it’d be the right thing for the club at this point or for him as a player, but our issues go far, far deeper than him, and to cast him as the villain of Vicarage Road is missing the point, in my opinion.

Speaking of the Richarilson dive, which was a very obvious dive, the incident was reviewed by the new panel who can make a decision as to whether or not a retrospective punishment should be handed down. They looked at it, from all the angles that we’ve looked at it from and understood it was a piece of gamesmanship, and decided that it wasn’t a dive at all.

At which point you have to ask what is the point of this panel? Ok, it’s not quite an Arjen Robben meets Cristiano Ronaldo meets Gareth Bale meets Didier Drogba meets Luis Suarez and they all have a pint and create a MEGADIVE (perhaps sponsored by Sega), but it was still a dive. The kind of dive that football should be more concerned about getting rid of than the ‘I believe I can fly’ kind which are so ludicrous they speak for themselves.

This the subtle, instinctive kind of cheating that’s very difficult for referees to spot in real time, which is why the creation of a committee who can review incidents with the benefit of multiple replays from different angles should have been something to welcome. Except for the fact they seem unwilling to make any kind of difference.

It’s as clear as day, Richarlison knocked the ball ahead, threw himself forward and onto the ground with almost no contact from Bellerin – and don’t start with the ‘there was contact’ justification because the Watford man threw his hip towards the Arsenal defender thus initiating what little contact there was – making it a dive. A divey dive.

Anyway, that’s not to make any excuses for us on the day. It was a tough one for the referee, but it’s still a bit dispiriting when things that are supposed to make things better just don’t. I am looking forward to an Arsenal player becoming the first one to pick up a retrospective punishment though. That feels inevitable.

Elsewhere, Wojciech Szczesny spoke about how he’s improved as a player since his career took him to Italy, in the main because of the different style of coaching. He says:

I enjoyed working with some great coaches at Arsenal, Roma and here, but the goalkeeping school in Italy is very different, it’s very technical and pays more attention to the details.

Honestly, I couldn’t say from a technical standpoint that I improved in any way from when I became first-choice at Arsenal until the day I left for Roma. However, in the two-and-a-half years since I came to Italy, I’ve improved massively which is thanks to the coaches and the way they work.

Some of it, I believe, will be down to him maturing as a person, perhaps growing up a bit after making a mess of things at Arsenal, but there have long been concerns over the quality of our goalkeeping coaching. There’s the veteran Gerry Peyton who was thought to be retiring this summer, but when Arsene Wenger’s contract was renewed he renewed all of his current coaching staff whose deals are tied to his.

We brought in Jens Lehmann but he’s not working specifically with goalkeepers. Both Szczesny and Fabianski had issues with Peyton, and the latter brought the innovative Tony Roberts from Arsenal to Swansea after he moved there.

Regardless of your feelings towards Szczesny – and I’ll be up front and say I think letting him leave was a mistake and I’d rather have him than David Ospina (who will probably depart next summer) – it’s pretty damning to say that the technical part of your game did not improve during so many years at the club. Perhaps part of that was down to him, but the implication is clear – we require better coaching, and not just for the keepers.

Ask yourself how many players that come to Arsenal improve the way they used to in the past? Rather than make players better, they seem to stagnate – with one or two obvious exceptions.

Right, for more on the weekend’s defeat, where we are, where we’re going, and lots more, check out yesterday’s Arsecast Extra. James and I get right into it, so listen, subscribe, share etc below. Have a good one.