Minsk is a city I cannot imagine I would have ever visited were it not for the fact that Arsenal were drawn to play there in the Europa League. That’s the beauty of European competition, the chance to see a bit of the continent, the opportunity to become a tourist. The Europa League makes the chance of relatively long journeys to Eastern Europe a little more likely.

Arsenal could have drawn BATE Borisov in the Champions League group stages in 2008, 2011, 2012, 2014 or 2015 of course. I have travelled to Kyiv, Sofia and Istanbul to watch Arsenal play in Europe’s premier tournament. It’s the most first world of first world problems, but I admit that the annual trips to Barcelona and Munich – wonderful cities though they are – were beginning to become stale.

Most of my enthusiasm for the Europa League is based on the opportunity to travel to new territories. Minsk and by extension, Barysaw, the secluded town in the middle of a forest where BATE are based, very much lived up to the bill in that respect. Minsk is a striking, beautiful city. Sadly, it was almost entirely destroyed during the Second World War.

So its modern sheen, its wide pavements and its generously sized roads owe much to the devastation brought onto the city in 1941. It was rebuilt from the ground and, therefore, was reconstructed with the motor vehicle firmly in mind. Its fresh out of the cellophane appearance has a tint of melancholy to it as a result.

My favourite thing about attending some of the more ‘obscure’ European away fixtures (if you’ll forgive my slightly awkward phrasing), is that the genome of the Arsenal fans changes. Due to modern ticketing arrangements – season tickets, memberships, away credits – the Arsenal ‘audience’ is a fairly captive one. It is more or less the same people that go to each game, especially away from home where allocations are small and access to tickets is fairly exclusive.

Away games in the further flung parts of Europe tend to alter this drastically. I recall travelling to Kyiv in September 2008, one of only fifty three Arsenal fans that travelled to the game from London. It was my first foray behind what would once have been considered the Iron Curtain. It wasn’t the ‘otherness’ of a city like Kyiv that left its mark on me.

I was expecting to feel a long way from home as I negotiated the Ukrainian streets and the Cyrillic alphabet, but I didn’t expect to feel so much like a foreigner when I entered the Arsenal enclosure. There were a total of 350 or so Gunners fans in the away end and only 1/7th of that number sported a London accent. Supporters’ club flags from St. Petersburg, Moscow and Tbilisi dominated the landscape.

The first chant of “Arsenal! Arsenal! Arsenal!” cut through the chilly night air, only in a way I hadn’t heard before. The vowels were flatter and shorter and it was delivered in a strong Slavic accent. I quickly realised that “Arsenal” is a word that lends itself perfectly to Slavic and Baltic dialects. The reason it’s such a malleable word for football chanting is because it can be enunciated in either two or three syllables, depending on the meter. A swift, Slavic “ARSNAL!” provides an interesting contrast to the elongated vowels of a London “Aaaarsenaaaawl.” 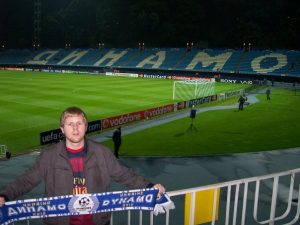 That night in Kyiv, I ceased joining in with the chanting, my accent was too at odds with the prevailing lingo. Initially, it was an interesting and, I will admit, slightly unnerving experience. But I have grown to enjoy the novelty of it. I have written before about the trip to Udine in August 2011, probably my favourite European excursion, where the away end was dominated by supporters groups from bordering Slovenia and Austria.

In Sofia last season, Arsenal Bulgaria had a very large presence at the Ludogorets match. The accents of the travelling fans intermingled initially. But shortly before kickoff, the local police artificially extended the away enclosure. There were two blocks of seats next to the Arsenal enclosure which had not been sold. Such was the presence of red and white in the home end that the police took the decision to open this extra block and invite local Gooners to avail of it. 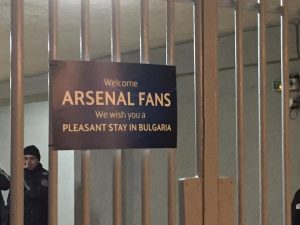 It doubled the capacity of the away end and indefinitely neutralised the cockney tones of the Arsenal contingent. It’s not just the intonation of the singing that makes these fixtures unique. The high presence of local fans gives the away end a genuine fervour that is occasionally missing from domestic fixtures.

Like I said, Arsenal’s travelling support is pretty self-contained. If you are at an away game, it is very likely that you attend them regularly. Therefore, fewer of us feel the sense of ‘occasion’ that often creates an exuberant atmosphere. That’s pretty natural when something becomes routine. Add the current sense of disgruntlement in the fan base and that can often multiply the sense of ennui.

Many supporters genuinely consider attending some of these matches a bit of a chore, but they know full well that if they turn in their away memberships now, it will be very difficult to ever return. So attendance has become a game of endurance for some. I like to think that I never take attending matches for granted and I certainly do not associate attendance with endurance. Quite the opposite.

But, and I hope this does not sound patronising, I found the enthusiasm of the local support infectious (not just in the Arsenal end either, at least 1/3 of the home end were proudly wearing red and white in Barysaw). Whilst not in any way miserable about the prospect, I can’t pretend I was supercharged to watch the Gunners’ second string play in a Europa League group game.

Meanwhile, the ARSSC (Arsenal Russian Speaking Supporters’ Club – who take Arsenal Belarus under their umbrella – booked out a huge area in a local bar for supporters that had travelled from London, which was a remarkably kind spirited thing to do. There has been so much talk of a schismatic fan base over the last few years that it was wonderful to receive a reminder of what knits us together as Arsenal fans.

“Utmost respect to Artemiy, leader of Arsenal Belarussian Supporters Club, he took the organisational burden and managed it perfectly,” Vladimir Harlach of the ARSSC told me. “That tradition of hospitality is deeply in our blood and culture, Belarusians in general are hospitable and kind people mostly, so a warm welcome was to be expected.”

It was also tremendously reinvigorating for jaded old hands like me to see just how much getting the chance to attend an Arsenal game means to so many people. People that have spent several drawn out European draw ceremonies crossing their fingers, hoping against hope that the team might just pitch up in their back yard, just one time. And when that wish is granted, the occasion is wrung for all it is worth.

“We used to watch some games with Viacheslav Hleb- Alex’s younger brother,” Vladimir recalls. “What was most unique and memorable about the BATE game was the off pitch part of the evening. The feeling that you’re welcoming your dream at home. And fellow dreamers. We’ve waited for this for years, decades even.

“I have been an Arsenal fan for 17 years. I have been to Donetsk, Moscow and Kyiv to watch the team, but it’s hard to get to London for visa reasons. Arsenal playing in Belarus felt like an impossible dream.” ‘Tourists’ is a pejorative part of the football fan’s lexicon nowadays. It is often used dismissively and judgmentally. But in Minsk, I saw the tribal side of football tourism at its finest.

The 350 or so Arsenal fans that travelled from London were tourists in the traditional sense of the word, whilst the locals who warmly welcomed us into their city hitched a ride on the match day bandwagon many of us take for granted. So in effect, we were all tourists and we were all together, but it was certainly the “local tourists” generating the atmosphere on this occasion.