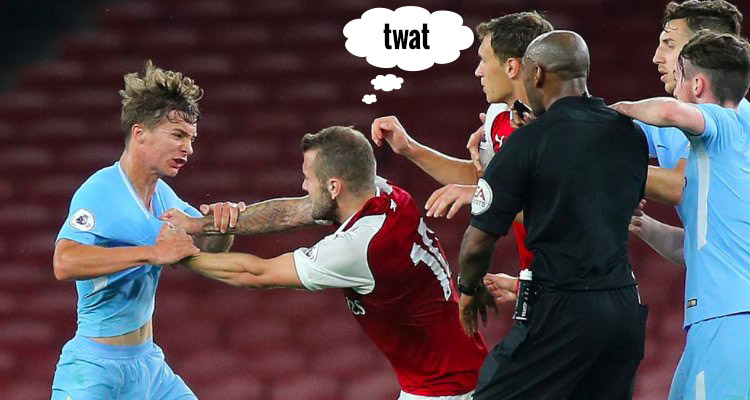 Following the Stoke game I was expecting yesterday to be fairly quiet and while nothing really earth-shattering happened it ended being quite busy.

I’ll deal with the transfer stuff in a bit, but the most eye-catching thing was Jack Wilshere playing for the U23s against Man City at the Emirates last night. He played pretty well, his experience and quality showing against opposition still learning the game, and he got himself a tidy first half assist too.

In the second half though, things went a bit south. He took umbrage at a challenge from a City player, pushed him, watched this young lad squirm around on the pitch like an idiot, then got involved in some afters with another opponent who came steaming in after the push. The end result was a red card and the contretemps carried on into the tunnel too.

I think he was quite unlucky really, and when you’ve been a player who has had so many injury problems that have stemmed from bad tackles, I can understand reacting to the initial challenge. There really wasn’t much in the push either but when you’re 25 and playing at this level there is the need to keep your cool because you’re basically playing against kids. It looks like one of them thought it would be a hilarious jape to wind up Wilshere, and it worked.

At the same time though, there’s part of me that enjoys seeing that bit of fight even if it is in a reserve game like this. I get that it’s a bit daft and ultimately counter-productive, but there you go. I also think some of the reaction to the sending off last night has been ridiculous. It’s hardly a huge deal, and I think it speaks to a media/societal desire to make every single thing into a massive drama even when it’s not.

There isn’t any ban that might affect playing for the senior team, or a senior team, but I’m not sure he’s ready yet anyway, and it won’t affect any potential departure – although my suspicion is Wilshere will remain an Arsenal player for the season ahead. Unless an offer too good to turn down comes along, I think we’re inclined to keep him, and from the player’s point of view my understanding is that he’s not looking for a move knowing fine well that he can go on a Bosman next summer which would undoubtedly increase his options when the time comes.

Before we move onto some departures though, another word for Reiss Nelson. The 17 year old scored another couple of goals in the win over Man City, and his talent and potential is obvious. I also found it quite interesting that the Arsenal website was going large with stories about how good he is yesterday. It could be a case of putting 2 and 2 together and getting 5, but it felt a bit as if he was being talked up ahead of giving him playing time this season.

It’s almost as if the emergence of a special young talent go some way to soften the blow of no further arrivals in the transfer market this summer. Anyway, when I look at the squad, and someone like Theo Walcott who doesn’t seem to fit this current system at all, I’m all on for giving Nelson a run if that’s the alternative. That’s not to say it should be, but if it is I’d rather see something new than something we’ve seen countless times before.

So, we have trimmed the squad a little bit with a couple of loans, and some youth level departures too. First up:

Carl Jenkinson and Cohen Bramall to Birmingham: The full-back duo have been loaned to Harry Redknapp’s side for the season. For Bramall it’s a chance to play first team football and to see if he can develop with regular playing time. For Jenkinson it’s a way of seeing out the final year of his contract, and those who wonder why we didn’t just sell him will have to take his wages into account.

I suspect we’re still paying a substantial part of his salary, and as I’ve said many times this summer, players are people too and nobody wants a pay cut. When you consider he had the chance to go to Palace last January and is now playing Championship football it’s something of a step down, but there you go.

Ismael Bennacer to Empoli: He’s not exactly someone who was weighing down the first team squad, having played just one game for senior team, but the 19 year old Algerian international has joined the Serie A side on a permanent deal. He spent time on loan at Tours last season, and although highly rated by Arsene Wenger was never going to make the step up to the first team so has wisely been moved on.

Jon Toral and Chuba Akpom: Toral looks like he’s going to sign for Hull City on loan. He’s a talented midfield player who arrived at the club at the same time as Hector Bellerin, but who has never been given the chance the full-back was. He’ll do well for himself wherever he goes, he’s got plenty of ability and will have a Steve Sidwellian career I’d guess.

As for Akpom, he’s so far down the pecking order now that he’s got no other option but to move. He had a loan spell at Brighton last season during which he played little and failed to score, so he needs to find the right club at the right level. Both Celtic and Leeds are said to be interested, which is about right as it stands, but he’s still got a bit to prove.

So, nothing too major as I said, but as we head inside the final 10 days of this transfer window there’s at least some activity as we look to streamline our squad. Our inability to move players on, and the effect having a better structure behind the scenes to help do that, is one of the topics of discussion on yesterday’s Arsecast Extra. There’s obviously a review of the Stoke game, chat about why we should never put the ball out of play when an opponent is down injured, the manager’s team selection and subs, and how in another dimension a different James and Andrew are enjoying a convincing win.

Listen/download below, and there’ll be more from me here tomorrow. Until then.