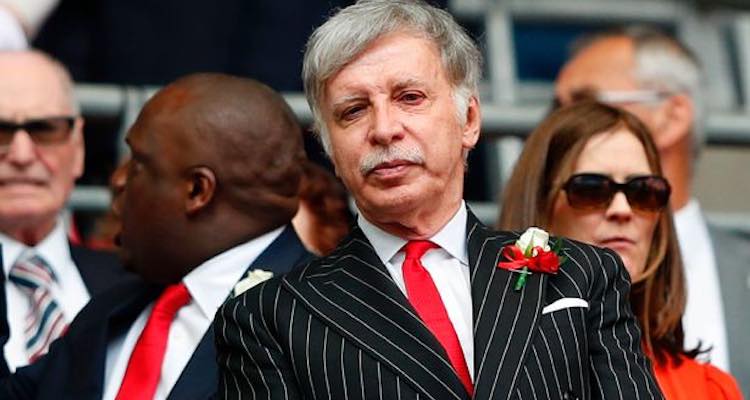 Good morning. Not a lot happened from a footballing point of view yesterday, but there was certainly a story that got people talking.

That channel is owned by a company called Outdoor Sportsman Group, which is a subsidiary of KSE (Kroenke Sports & Entertainment) who own 67.05% of the shares of Arsenal. It was then revealed that aside from the outdoor sports it also broadcasts shows which reportedly feature trophy hunting, the killing of animals like lions and elephants.

Understandably, people were upset by that. Even Jeremy Corbyn saw fit to comment, saying:

I’m appalled at the glorification of killing wild and rare animals on this TV channel. As an Arsenal fan I’m disgusted that Stan Kroenke is involved in such a brutal, unethical and unnecessary activity. This is not sport. Kroenke should stick to football if he wants to be involved in sport.

Now, anyone who reads this site knows I love animals. I can’t bear the idea of magnificent creatures like lions and elephants being hunted for sport, even if the PR company who are representing the channel claimed that such killings were ‘ethical’. Their spokesperson, Simon Barr of Tweed Media, said:

I called the company yesterday and asked to speak to him to ask what ‘ethical elephant hunts’ were, but was unable to speak to him. I made further email enquiries to the company which went unanswered. I did some quick Googling, and back in 2012 a spokesperson of the WWF (World Wildlife Fund) said it’s a way to combat poaching:

It (poaching) kills 12,000 elephants a year. We’ve also learned – and this can be a challenge for conservationists – that in some circumstances, regulated hunting has to be tolerated, because it reduces the poverty that fuels poaching.

It still sounds abhorrent, especially as I’m sure many of these ‘ethical’ hunts are sold to rich people, which may help boost the coffers of parks or wildlife organisations but do little for those suffering from poverty. And when it comes right down to it, hunting animals simply for sport is grotesque, it makes my skin crawl even thinking about it.

At the same time though, thinking about it, and hunting in general, also forces us to consider our own behaviours. Very few of us are rotten enough to pretend a rigged fight where the animal has no chance is any kind of sport, yet on a daily basis we contribute to the suffering of animals by eating meat.

If you go to your local fried chicken place, a burger joint, or eat a bacon sandwich in the morning, chances are the food you’re eating has seen the animals in question suffer. Battery chickens, mass produced meat, cows filled with injections and vitamins, we all know it but of course manage to compartmentalise it because that’s what we do. Pigs become pork, cows become beef, deer becomes venison and so on.

What’s better: eating food like that, or a hunter who kills a deer to help control a herd, but then uses that animal for food throughout the winter, uses the hide for something, where there’s no waste, where the kill is relatively quick and painless? I’m not trying to preach or anything here. I eat meat, I like meat, I try and be as ‘ethical’ as I can (free range chicken etc), but we’re at such a remove from what ends up on our plate we rarely consider its provenance.

In the end though, there is still something particularly noxious about those who feel like animals are trophies. It shouldn’t surprise us, if people can treat each other with the kind of contempt we see on a daily basis, why would they view animals as more worthy? The glorification of it via TV shows and so on is particularly stomach-churning, and the fact that KSE are involved in this Netflix for Bloodsports does reflect on Arsenal, in my opinion.

The club, I suspect, will say that this is an issue for KSE and I think that’s probably right. It doesn’t mean that the club are condoning this kind of thing. I’m sure the vast majority of right-minded people at Arsenal find it as loathsome as the rest of us, but realistically what can they do about it?

I saw lots of comments yesterday saying Kroenke should be sacked – which is rather impossible because who is going to sack him? Plenty of others who claim to love animals seemed to have no issue with the idea of the majority shareholder being hunted and taken out with an elephant gun himself, which is so daft it doesn’t do much good to anyone. So what can people do? I don’t really know. This is a channel that has been running since last year in the US without anybody making any objection to it. The UK launch has brought it into sharp focus of course.

Will any kind of campaign make any difference? If there’s enough fan outrage will KSE divest themselves of their interest in My Outdoor TV? If it makes them money, I suspect not, but perhaps letters to the club might apply some pressure. The focus on the content of this channel that is unacceptable may also impact the success of it following its UK launch.

Even if you like fishing, angling, hiking, and the other outdoor pursuits featured on it, I can’t imagine too many people are willing to pay £10 a month knowing that the money is also being used to fund trophy hunting and bloodsports. This has been little short of a PR disaster for the channel itself, and KSE, and to some extent Arsenal by extension.

Maybe the failure of the channel is the best possible outcome, but it still leaves us with an owner who, through his various business interests, is happy to condone that kind thing. And I still don’t know what anyone can do about that.

On a lighter note, James and I look back at the Emirates Cup and what we might have learned from that over the weekend, as well as more on Alexis, Arsene Wenger’s comments about ideal contract length, and much more in this week’s Arsecast Extra. Listen below, and there’s more from me tomorrow.