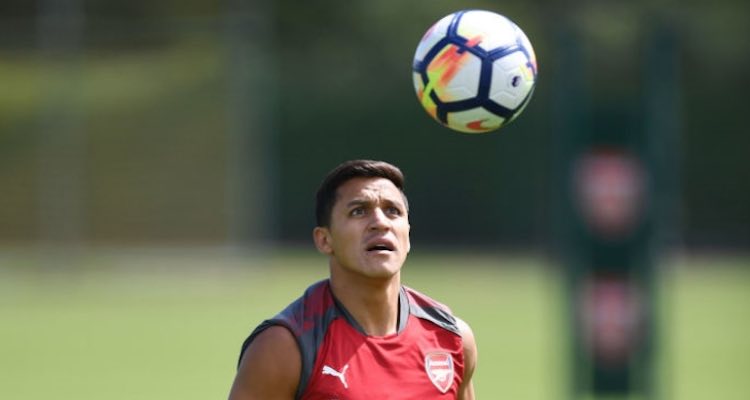 So, he’s back. After the Confederations Cup, an extended holiday, a bout of ‘illness’, and who knows what else, Alexis Sanchez is back in England.

He didn’t look in any way unhappy about this, posing for a picture in front of a private jet with his dogs. If he was truly unhappy about having to return to Arsenal, he’d probably have posted a moody silhouette of himself looking out the window of the plane with a caption that read ‘Sometimes in life you must go where the road takes you’ (but in Spanish). 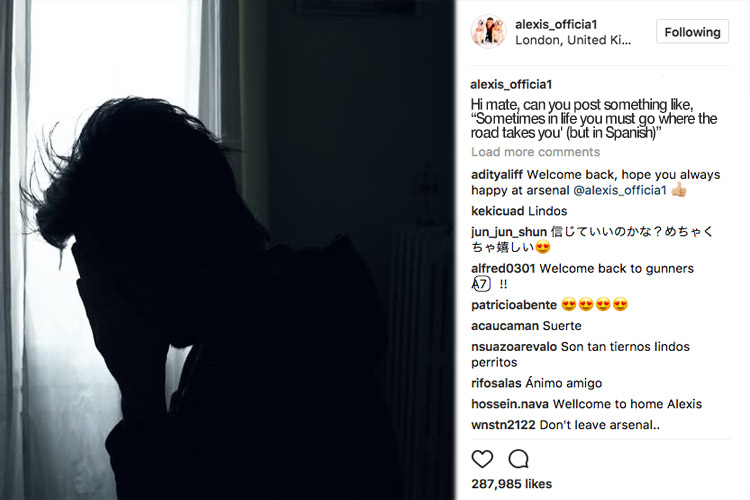 There would, of course, be no question of posting nothing on social media at all, because without it how would we know we even exist? It’s only the replies and likes and hearts that are evidence we’re actually alive in this great computer simulation we live in.

After getting back Sanchez went training where he ran around, stood around getting his picture taken with just his GPS bra on, played with the football, sat on the football to get his picture taken some more, and all the rest. No doubt his fitness will have been assessed, and I expect him to start the Community Shield on Sunday.

Do I? Not really, but would I be surprised? Not at all. It feels like it’s too soon, but you try telling him there’s a game of football he can’t play in. If anything is going to make him have a strop of some kind then this is it. Assuming there are no underlying fitness issues, the bench seems like a good compromise.

Also in training were a couple of players linked strongly with a move away. Kieran Gibbs was there, while Lucas Perez was even smiling at one point while wearing his natty new number 28. He’s no longer 9, of course, that now belongs to new signing Alexandre Lacazette but the Spanish striker didn’t seem that unhappy at being there with the rest of the chaps. It’s almost as if his agent is hamming it up a bit to try and force a move through.

There’s talk that Newcastle United are interested in him as Arsenal hold out for a fee closer to €15m than the €9m currently on offer from Deportivo, so we’ll have to see if Rafa Benitez is ready to match that. If not, as we’ve said before, the club may just need to take what they can get for players they don’t want.

I saw reports saying that one of the big issues in moving players on is the wages they get at Arsenal. A transfer away means getting paid less, and although most us don’t really view football as a job, you can be quite sure many players do and naturally they’re not that keen on going somewhere to take a massive salary cut.

It got me thinking about Wayne Rooney’s move to Everton. I’m unsure if he was at the end of his Manchester United contract, but he went back to Goodison Park on a free transfer, and even bearing in mind the leeway that allows clubs in terms of what they can offer in wages, there’s no way Everton could afford to pay him what he was earning at Old Trafford. Rooney has, down the years, shown himself to quite concerned indeed with how much he earns, his tactics at extracting the maximum from United by acting up worked very well for him.

So, if Everton – albeit an Everton somewhat more cash rich than they have been in the past – can afford to sign Rooney, surely it shows that it’s possible to move players from a high wage bracket to one below that. I guess Rooney’s age may have played a part too, but when it comes to players we’re trying to sell, we’re not talking about any superstars.

Between Kieran Gibbs, Carl Jenkinson, and Mathieu Debuchy we’ve got 28 first team appearances last season (and 22 of them were from Gibbs). Calum Chambers, another man tipped to depart, was out on loan at Boro; Perez we’ve mentioned and while I think he’s a good player who did well, the simple fact is that he doesn’t convince Arsene Wenger – making him last season’s Joel Campbell or Lukas Podolski (is it something about left footed forwards?).

We all know that as the transfer window heads into its final weeks things start to get busy, and many clubs will deliberately leave it late to do business because they know they can drive a harder bargain on prices. At the same time they have to balance that with the fact they obviously need players if they’re in the market in the first place, so it may well be a case that things start moving.

It shouldn’t be a distraction of any kind, these outgoing situations don’t really have an impact on the squad in the same way that being short players before the start of the season does, but in the end we’re talking a lot of money on the wage bill that could be used to attract new players or help keep some of the ones we want to stay at the club.

As we told you on Arseblog News the other day, it seems as David Ospina is going nowhere, and he’s up for the fight with Petr Cech for the number 1 spot. Does that mean a loan move for Emi Martinez? At 24 now, he’s got to play a bit more regularly, another season as third choice isn’t going to help him develop and given how highly rated he is inside the club, I’m sure that’s a situation they’ll be giving some thought to.