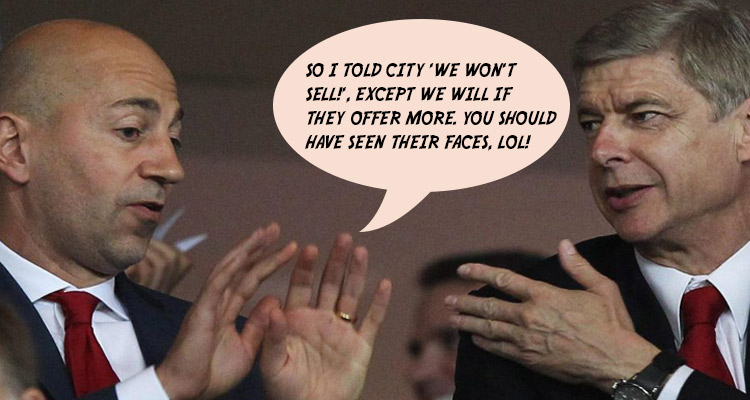 With less than 48 hours to go before the transfer window closes, let’s take a look at what’s going on, because it seems that there’s going to be plenty happening (or not happening) between now and tomorrow night at 11pm. Yesterday was a busy news-wise, so let’s break it down player by player.

Despite Arsenal agreeing a fee with Chelsea believed to be in the region of £40m, Oxlade-Chamberlain has rejected the move on the basis that he’ll be played at right wing-back, and he wants to play in central midfield. He has privately, and publicly via his agents, made it clear that this is the main motivation for his desire to leave, and if he’s turned down Chelsea because he doesn’t think he’ll get that chance then at least he’s been consistent there.

The wages on offer at Stamford Bridge were said to be around £220,000: far, far in excess of what he’s earning at Arsenal right now, and he apparently now wants to join Liverpool. Their bid is said to be lower, and given the way they’re doing transfer business this summer with an eye on next, I wonder how much they really want him, if at all. He or his agent must have been given some encouragement by them, but we’re at a point where he could just as easily stay and see out his contract here.

Some will castigate the player for this, but leaving aside the paucity of his performance at Anfield which is fresh in the mind, the issue is the club and how it has dealt with him and others throughout this summer. In typical Arsenal fashion we’ve left ourselves with a load to do in the final couple of days, rather than making difficult decisions earlier in the summer.

It’s not as if Oxlade-Chamberlain’s position has changed. He told the club months ago he wasn’t going to sign a new deal and that he wanted to leave because he wasn’t being played centrally, so if we’re unable to shift him in a few days that’s far more on us than it is on him.

All throughout the summer Arsene Wenger has insisted that Alexis would not be sold, and would see out the remaining 12 months of his deal at least. So, if that’s the position, what you don’t do is start discussions with a club who wants to buy him, yet Ivan Gazidis spoke yesterday with City’s Chief Executive Ferran Soriano about the possibility of a deal.

City want to pay cash, Arsenal proposed a player-swap deal involving Raheem Sterling. I can see why Arsenal might want to do that, but I have no idea why Sterling would agree to it. At the moment he’s part of the best attacking squad in the Premier League, and Arsenal look an absolute mess. Some people say he might like to come back to London, which is understandable, but I think this is a complete non-runner – especially when you consider he shares an agent with Oxlade-Chamberlain.

Then last night City came in with a £50m bid, which Arsenal rejected, insisting the Chilean would not be sold … unless there was more money on the table and a City player was included in the deal. That’s not exactly hardball when your previous position was that under no circumstances was he for sale. Now it seems he is available if the right deal is on offer.

There were some reports, later denied, that Sanchez had asked to to leave the Chile training camp for 24 hours to sort out his future, but far from there being no chance of a deal being done, it’s there if City up the ante and Arsenal will look like chumps regardless of how much they get or who they get in return.

He turned down a move to Watford after personal terms couldn’t be agreed, and is expected to join West Brom today for a fee of around £7m. It seems a bit low given the way this current market has operated, but our inability to negotiate good prices for players we sell has long been obvious, especially when you see what other clubs can bring in.

In a summer when agents and players have acted up, Gibbs hasn’t agitated or said a word in public. He’s perfectly within his rights to hold out for a deal he feels is best for him, and while his Arsenal career never quite reached the heights we’d hoped for, he was always professional and gave 100%. Good luck to him.

Another one that’s up in the air. Arsenal apparently want a €5m loan fee from Inter Milan for the German international, with a clause that will see him move there permanently for €25m if he plays more than 50% of their league games this season.

Then reports last night via Sky Sports said he was not for sale and part of our plans for the season ahead. Even if the move doesn’t go through now, what does it say to the player that we were so obviously willing to let him go less than 12 months after signing him? I’ll tell you: it says to him that the manager doesn’t rate him, and while he could get his head down, work hard and prove Arsene Wenger wrong, it’s an unhealthy environment for both player and club.

I have no idea what will happen with this one, but having gone so far down the road of allowing him to leave, keeping him seems daft. A cut price compromise just to get rid of him wouldn’t be a surprise at all.

With so much focus on outgoings, this was the only mooted arrival yesterday. I guess it would be dependent on the departure of Mustafi, but it would be a hugely underwhelming signing. I think he’s a better player than people give him credit for, he’s certainly no Silvestre, but if your answer to shoring up a horribly porous defence is a 29 year old ex-Man Utd player then it says a lot about your scouting/transfer system.

Last week Tony Pulis confirmed we tried to buy him last summer, and our interest in him in genuine, but there wouldn’t be much dancing in the streets if he made the move from the Hawthorns to the Emirates.

In conclusion, I think it’s fair to say that Arsenal’s shortcomings in the transfer market are not a new thing, but they’re very much on display in this window. We are not good at doing deals, whether that’s players coming in or players going out. It’s almost as if we don’t have right people in key positions and the right structures in place to do the business as quickly and efficiently as it should be done.

I suspect the next two days will be frenetic, fraught and we’ll end up compromising all over the place because that’s the only option when you leave it so late. This was a summer with no real distractions, no Euros, no World Cup, and yet here we are once again heading for a last-minute trolley dash for players we might want to add to the squad, while desperately trying to move players on when we should have sorted things out much earlier.

We all know transfers aren’t as easy as some would have you believe, but I’ve never seen a club that makes them more difficult than licking your own elbow. We simply refuse to learn and we end up in the same situations year after year after year.