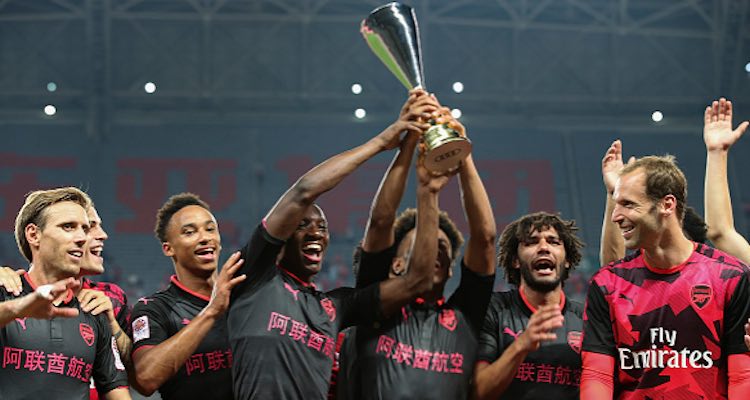 Having been beaten 10-2 on aggregate by Bayern Munich in the Champions League last season, Arsenal had the last laugh by beating the Germans with a 1-1 draw and then lifting an actual trophy at the end of it. What did Bayern get for their sound thrashing of us last season?

I’ll let you what they got: they got a sound thrashing themselves, rinsed by Real Madrid in the quarter-finals 6-3 on aggregate as the Spaniards went on to win the tournament for a record time. Thus their win over us was utterly pointless and yesterday we won the ‘International Champions Cup’ which is a cup for international champions, not just European ones.

What joy for the likes of Joe Willock, Reiss Nelson and Cohen Bramall to experience winning a trophy of immense prestige at such an early stage in their careers. While Frank Ribery, wonderfully creamed out of it by Ainsley Maitland-Niles at one point, could only wonder where it had all gone wrong. Time to hang up those boots and get back to the side of a cathedral where you belong.

Even the way we did it was to be applauded. They got their customary penalty against us after their customary dive in the box, and but for our keeper Petr Cech and a dodgy offside decision they might have gone further ahead. Ozil found Lacazette at one point but Not Neuer in goal for them made a good save.

As we do, we made many second half changes, after one first half one because Sead Kolasinac was ejecting stuff like The Exorcist – but from both ends – due to food poisoning. Just when Bayern thought the win was theirs, Alex Iwobi burst through the middle with skill, pace and power, played it to Ramsey, kept running, and when the Welshman crossed he nodded home beautifully into the bottom corner.

That meant a penalty shoot out. Nacho Monreal took one of those top corner penalties that everyone loves, Emi Martinez made a couple of saves as once more a German side bottled it from 12 yards, and we had finally vanquished the memories of those two games back in February and March. Football giveth, and football taketh away, and yesterday it did giveth unto us and we were bless-ed.

It was a bit of a shock coming here from Australia, where we were freezing at times! We worked very hard on Monday and Tuesday, so I was a bit scared that tonight could have big problems.

If you ask me is it ideal physically to prepare, certainly not. But it does have other advantages because we can meet fans all over the world so that is a positive.

Meeting fans is definitely an positive thing in itself, but not when it comes to physical preparation for the new season. At kick off yesterday in Shanghai it was somewhere between 34-37C with a warning that there was ‘unhealthy air quality for sensitive groups’, and whether those difficulties make us appreciate the better air back in England when we return at the end of the week remains to be seen.

Of course there’s one more fixture in China, we play Chelsea on Saturday in a game which doesn’t have a trophy at the end of it so I don’t know why we’re even bothering. How is Joe Willock supposed to get himself up for this kind of thing beyond the ability to boot Chelsea players up in the air (and there isn’t even Diego Costa or John Terry involved)? Pointless. Oh well.

The other big news yesterday was the departure of Wojciech Szczesny to Juventus. This made me sad, because I really like him. People can make all the counter-arguments they like, but I think it’s a real shame the way things went for him. I know that on one level he has to take some of the blame, he had his dream job and perhaps took it for granted a bit and made a mistake.

However, he did work hard to make up for it, maturing into a fine goalkeeper after two seasons with Roma, and I really felt like there was scope to bring him back. With Petr Cech heading towards 36 years of age, and David Ospina a decent number 2 whose future is up in the air every summer, Szczesny could have been a very good option for us.

It’s clear that leaving Arsenal with such finality has been emotional for him. He posted a fantastic message on Instagram (I loved the ‘I may not be an Arsenal player no more‘ bit), and at his unveiling, when asked if he had any regrets about how it had gone at Arsenal, you could see he got a bit choked up:

Look how emotional he is when asked if he has any regrets about Arsenal https://t.co/7YcVMSJ6dc ?

Anyway, we all have our favourites and he was one of mine. A bit mad, a huge character, he always stuck the knife into Sp*rs when he could, and that cheeky wink when he’d flattened Gareth Bale would definitely be included in my Best Bits of Arsenal video that I bring out at Christmas time (available on VHS and Betamax!). Best of luck to him at Juventus.

Interestingly, in a video talking about Szczesny’s departure, Arsene Wenger cited both Emi Martinez and Matt Macey as potential candidates for the position in the future. While Cech and Ospina seem set to fight it out this season – unless we let the Colombian leave for the first team football he wants – there appears to be some faith in those coming up behind, and that may well have been a factor in the decision to let the Polish international go.

Right, a couple of days before Chelsea. Just enough time for Arsene, Ivan and Dick to get a couple of deals done one way or the other. Let’s have it.