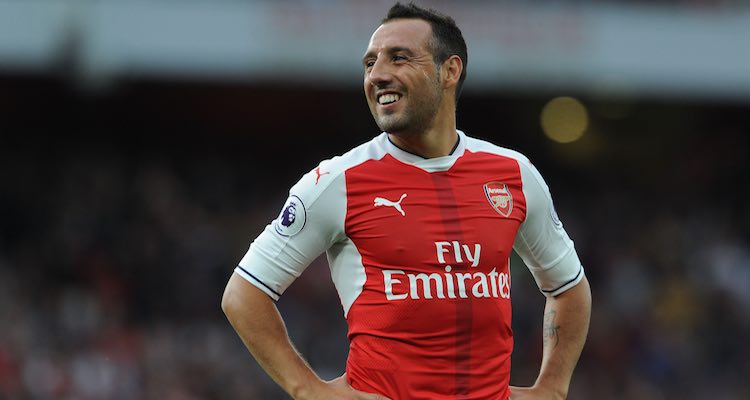 We head into two games this weekend in the Emirates Cup, facing Benfica tomorrow and Sevilla on Sunday.

Pre-season has seen Arsene Wenger use the full depth of his squad, making all kinds of changes in games and starting players in positions they’re not 100% familiar with or comfortable in. One of those is Mohamed Elneny, who has featured primarily at centre-half, and the manager was asked about his performances there ahead of this weekend’s tournament.

When he plays there of course he does extremely well. I always felt that a good central midfielder can be a good centre back. With the fact of course that when you’re playing in the back four you have to be decisive in the challenges, you have a bit more flexibility in the middle of a back three. He can do that.

Now, does that mean Elneny is all of a sudden going to become a central defender for us? I very much doubt it. Given that we were playing three at the back, and most of the time changing the team around at half-time, it meant using six ‘central defenders’ for each game.

We had Per Mertesacker, Laurent Koscielny, Sead Kolasinac, Nacho Monreal and Krystian Bielik on tour. Not with the squad were Shkodran Mustafi, Rob Holding, Calum Chambers and Gabriel. It was simply a case of numbers, needs must, and while the Egyptian did grand, it’d take some kind of defensive crisis for him to play there during the season. Thankfully we have no previous experience of such crises.

I mean, the boss went on to say:

Maitland-Niles sometimes played at centre back as well, even in the big games against Chelsea.

He certainly did. What he didn’t say was that he looked about as comfortable as a cat in an ill-fitting tuxedo who has turned up at a smart-casual dog dinner party. Not his fault, of course, he’s not a central defender, but I think it shows that playing there in pre-season is no indication that this is where he’ll play when the games have meaning and points attached to them.

There was an update on Alexis and Mustafi, who are the last pair due back from their extended holidays because of the Confederations Cup:

Alexis and Mustafi, their first training session will be on Sunday, the day we play against Sevilla. They are practising on the day.

As for their potential involvement in our first game of the season against Leicester, he said:

It depends as well on what is the need in the squad, what is their quality. All of these things together make your decision. Do you put them on the bench when they are not ready [to start]? It is easier to put a striker on the bench than a defender, sometimes. Because in a short period they can make an impact. We’ll see.

So that’s Alexis starting then. In seriousness though, he’s a player who isn’t often afforded much rest. I remember him being thrown into the action on the opening day a couple of years ago when he’d spent all summer at the Copa America or playing football in a volcano or something. We lost 2-0 to West Ham, and then later we lost him for a couple of months due to a hamstring strain.

His importance to the team is undeniable, but surely the job is to get the players who have been through the pre-season work as ready as possible for Leicester. Taking nothing for granted, but we should be able to beat them with the players we have available, including a club record signing striker, and even an extra week of training should be a benefit to Sanchez.

It might even help him get over his illness that he posted about Instagram a couple of hours ago. Is he too sick to travel? Is the start of shenanigans over coming back to Arsenal? Is he ‘sick’ sick, or SICK? I have no idea but let’s all tie ourselves up in knots over it and think the worst. It’s the only way to go through life. He doesn’t look that sick though, does he? I know when I’m actually ill the last thing I’m going to do is post a picture on Instagram, mostly because I’m lying down trying not to die of a fatal case of death.

Almost finally for today, as we worry about midfield, Santi Cazorla has vowed to return and get back to his best. The Spaniard has been sidelined since last October and has undergone multiple surgeries on his Achilles. It’s a big worry of course, but he’s positive about his prospects:

He also spoke about what a relief it was for him that the club took up the option to extend his contract last December. I know people questioned the decision, but to jettison a player who is going through the most difficult period of his professional life would have been a horrible thing to do. I know the ‘Arsenal way’ is something that is quite fluid, but I was glad to see the club do it.

Remember, they did the exact same with Per Mertesacker, everybody asked ‘Why?’, and then we got an epic FA Cup final performance against Chelsea and then earmarked him for a future role as the Head of the Academy. Not losing sight of the fact that players are people, not just names on a teamsheet, is an important thing and hopefully Santi can come back and make a contribution in the season head.

A couple of quick things before we go this morning. One is a post in which I discuss the future of the site, how we continue to operate into the future, so if you haven’t had a chance to read that yet, check it out here, and your feedback/thoughts are very welcome. Thanks so much for all the Tweets and emails about this, it’s been kind of overwhelming but hugely appreciated.

There’s some Tim Stillman on Mesut Ozil right here, and the last thing is the return of the Arsecast Extra after James got back from holidays. We catch up on all the major events that went down during his absence, answer lots of listener questions, chat about transfers in and out, and lots more. Check it out below, and there’s more from me tomorrow.