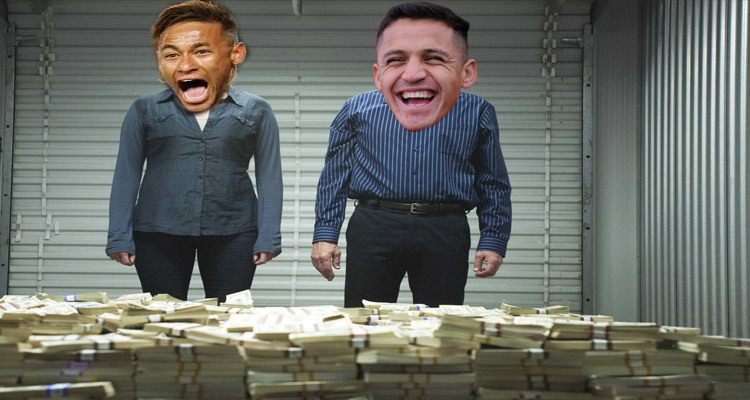 A quick Saturday round-up for you as we prepare for our final pre-season game overseas. It’s Chelsea in Beijing in the Bird’s Nest Stadium – last season’s champions versus last season’s team who stopped them doing the double with an epic FA Cup final win at Wembley.

It’s a friendly between Chelsea and Arsenal, it’s not really a friendly because there’s always some pride at stake and some London desire to have the superiority. It was a very interesting game in the final of the FA Cup, and we play against Chelsea in the Community Shield, and again very early in the season.

We know each other very well and it’s difficult to know how prepared Chelsea are and how far we are with our preparations. Saturday will be a good indication of that.

Even if it is pre-season and we can rationalise all the reasons why pre-season games don’t really matter, there’s just something of an edge when you play another Premier League team. Again, it won’t be the most important result or anything like it, but with the two games against them so early in the season, it’d be good if this was, at least, competitive. And there’s no reason why it shouldn’t be.

It kicks off at 12.40 UK time, it’s live on the official website, and I believe it’s on ITV in the UK as well if you fancy.

Meanwhile, in Paris there appear to be shenanigans going on. Some reports say Alexis Sanchez and his agent Fernando Felicevich are there putting the final touches on a deal with PSG. I saw an ESPN journalist last night Tweet that the Chilean was still in Santiago and was on his way to London, not Paris, so while there’s a little confusion there’s certainly something going on here.

Whether it’s with the permission of Arsenal is the big question. If it is, it means we’re open to a sale provided the price is right. If not, then there are murky things going on – even if we’re all aware that the back channels when it comes to transfers are often used before official permission is given from the selling club. And for those who want to take umbrage at this, Arsenal do it too.

Perhaps not as publicly as this appears to be going down, but there were stories about their sporting director spending two days in London, and if that is the case you’d have to imagine it was to talk to us about Sanchez, and not because he wanted to go to Madame Tussauds. If that’s the case then taking it further in Paris seems the natural step.

However, it does very much fly in the face of Arsene Wenger’s comments earlier in the week when he said quite categorically that ‘The decision is not to sell‘. Have we, as a club, flip-flopped that quickly? Is there something else going on behind the scenes that has caused us to change our minds? Or is it PSG and Sanchez’s agent trying to do as much as they can to force the situation from their end?

Your guess is as good as mine, but my gut feeling tells me it’s much more the latter than the former. And while Alexis has been pretty respectful of Arsenal so far, if he’s at the meeting them he’s obviously complicit too.

Nevertheless, I’m still not convinced his departure is as sure a thing as people say, nor do I want to turn the tide against Sanchez because it’s too easy to lash out at the player like some kind of defence mechanism. Yes we’ve had great players come and go in the past, but to write him off or to start with the invective because he wants to leave doesn’t do anyone any good. Ultimately, I think we’ve got a better chance of achieving what we want to this season if he stays with us.

In the end though, money will probably talk, as it always does in football. Reading the Guardian report this morning about PSG wanting Sanchez and Neymar was, frankly, depressing reading. Not because we might lose one of our best players, but because we appear to have slipped effortlessly into the realms of the absurd when it comes to transfer fees.

I mean, how can you read this and not just wonder what the hell is going on:

€222m?! It’s always been part of our make-up as football fans to be able to rationalise ridiculous amounts of money spent on transfer fees and wages, but this is hard to get your head around. The transfer market in general is like a game if Football Manager where every club has got the cheat codes for endless cash to spend on players, while a club like PSG – backed by the bottomless pockets of their Qatari wealth fund – are on the brink of spending €222m on Neymar, and possibly another €70m on Alexis?

[The owners of PSG are Oryx Qatar Sports Investments who say that their ambition is ‘to invest in profit-bearing projects within Qatar but also internationally. Revenues generated from these ventures are supposed to be reinvested into Qatar’s sport, leisure and entertainment sectors to benefit the community as a whole’. What kind of profits do we think will be reinvested from their ‘investment’ in PSG?]

I know we have to keep things distinct but it’s impossible to look at those figures and not feel like football is eating itself. I don’t want to go down the ‘Think of what that money could do for this, that or the other’, but when you add up those transfer fees, then add on wages, signing on fees, bonuses and everything else, you’re in la-la-land. It’s not even Monopoly money. We’re heading towards half a billion euros on two footballers.

It is what it is, and we accept it because ‘that’s football’, but it’s also abhorrent on some level. It’s ghastly and grotesque. It transcends anything that we can understand as regular people, and while many will say football is now a business, it’s entertainment, it’s a show, it’s Hollywood and all the rest, we lose sight of the fact that it’s supposed to be a sport.

And those who are tasked with protecting the essence of that sport and the game itself either don’t care or are so inept that they just can’t do the job properly. I wish I had some kind of answer, FFP appears to be dead in the water, and you can understand that if PSG have the money they’ll spend it, but I think anyone who looks on and thinks what they’re doing is in some way admirable really needs to think again.

Anyway, we’ll see how this all plays out. More and more I’d love for Arsenal to dig in and not sell Alexis, even if it means he goes on a free next season. Show the players that their contracts mean something and show other clubs that not everything has a price. I’m long enough in the tooth to understand the realities, but I’d still love it if we could stand up to this in some way.

We’ll have all the match coverage etc over on Arseblog News later on and throughout the day, and if you fancy something to listen to this morning, there’s an Arsecast for you to listen to from yesterday. I spoke to Michael Cox (@zonal_marking) about football tactics, Wenger the tactician, his new book The Mixer and lots more. Listen below.

Chelsea preview: Achieve something tangible to boost the intangibles