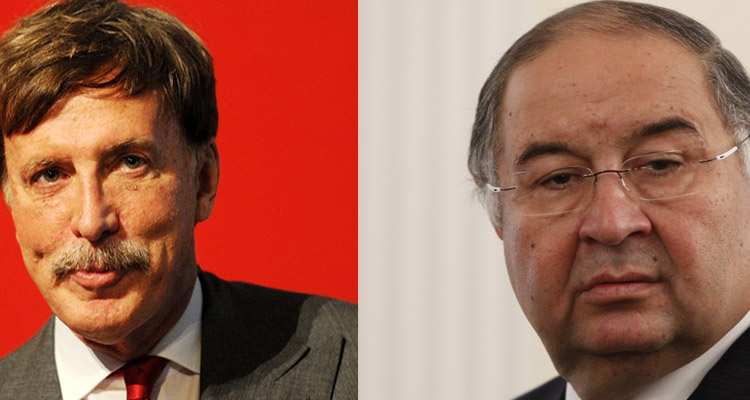 Well, if anyone thought we were going to sidle into the summer worrying only about trifling matters such as who is going to be manager, what’s going to happen to our best players, and all that, then yesterday ensured that’s not the case.

The Financial Times reported that Alisher Usmanov made a $1.3bn bid for Stan Kroenke’s Arsenal shareholding. The American, via his KSE company, currently holds 67.05% of the club, while Usmanov has 30.04% himself.

Now, we all know the situation is a difficult one. The dying wishes of Danny Fiszman were to keep the club out of Usmanov’s control, shenanigans went on, and ultimately Kroenke was the beneficiary as the major shareholders sold to him.

Since then there has been a stand-off, a stalemate, where a man with a substantial stake in Arsenal Football Club has essentially been frozen out. There is no communication between the two men, he doesn’t have a place on the board, and Arsenal are in a weird position where they’re owned by two billionaires, neither of which has ever put a penny into the club or financed it in any way.

Now, in itself that’s not necessarily a bad thing. The idea that a football club should operate as a business, generating its own revenues and spending accordingly makes a lot of sense, but as football itself has changed, you can’t help but wonder if that’s a model that will bring success any more.

I don’t believe it’s the major reason why we haven’t won more, but the longer we don’t achieve Premier League or Champions League success the more attractive the idea of a super-rich white knight becomes. Someone who will come along, dip into their bottomless pockets and spend spend spend – situations we’ve seen at Chelsea and Man City, for example (and when you look at their trophy history, it works).

So, what about this bid? How should we view it? My feeling is that Usmanov knows fine well that Kroenke will never sell to him, regardless of how much profit he’ll make, and is now fed up with being a dead duck at Arsenal. His former partner in RED and WHITE SECURITIES LTD, Farhad Moshiri, now has a 49.9% stake in Everton, and when we ran a story last August saying the Uzbek was willing to sell his Arsenal shares to go there, it prompted denials but that was a story based on good information and it’s one we stand by.

He knows that he’s never going to have any influence at Arsenal, and that although his stake in the club is more valuable than it was, it’s small money for a man The Sunday Times revealed to be the second richest in the UK with an estimated net worth of $19.6 billion. Clearly $600/700m is a lot of money, but in the grand scheme of us his fortune not so much, and men like Usmanov don’t want to be powerless the way he is.

One of the interesting lines in the FT report was: “Two people following the process closely said that other bidders were circling.”

This is where it gets interesting. I know for sure that this is the case, that there are currently other interested parties – very interested parties – and Usmanov is aware of them too. I suspect that his bid was serious, but ultimately he knew that it would be rejected. However, in making it, he has lit the fuse for others to test Kroenke’s resolve.

If another person or group comes along that the American is more willing to do business with then that would open the door for Usmanov to sell his shares and go to Everton. If a bid is made for Kroenke’s shares, they legally have to make the same offer for Usmanov’s, so he makes his profit, heads to Goodison Park – or soon to be a new stadium – pitches up with his former business partner, and all of a sudden he has power, influence and the ability to pump a lot of money into that football club.

The question is: will Kroenke sell? It’s hard to know. By all accounts he is a very stubborn man, and he has insisted more than once that he is in Arsenal for the long haul. As far as I’m aware he has never sold any of his sports ‘franchises’, but perhaps the timing is favourable for a more friendly bidder to come along. There are currently expensive delays with the stadium that he’s building in LA, and that could play a part. A handsome profit on his Arsenal shares would go some way to offsetting that.

However, I still think it’s going to take a lot for him to sell. I’ve written on this blog countless times about how I feel his ownership has been a problem, and will continue to be a problem in the future. The nature of the way he does business and how he views his teams speaks to that, so I would be delighted if someone else came in and took over. Especially if that someone had genuine ambition for the club and understood what it means to so many of us.

I remain deeply wary of Usmanov who, right now, is viewed more kindly simply because he’s not Kroenke. The moral quandaries are, however, going to be part and parcel of football in the future. As fans – and I mean fans everywhere, not just Arsenal – we can be fluid about what is and isn’t acceptable as long as it brings us success.

When you’re dealing with billionaires and billions of pounds, there are always going to be issues. Who has that kind of money? How did they make it? Where does the money come from? At whose expense were those fortunes made? Oligarchs, wealth funds, oil money, it would be very rare to find someone willing to spend £2bn on a football club who wouldn’t raise questions. I’m not aware of any Arsenal supporting philanthropists with that kind of cash, that’s for sure.

Is that simply a reality we have to accept and get on with? Perhaps. Does it make it easy to deal with? If your only concern is seeing Arsenal or any other football club win trophies, then it probably is. If you have some kind of  conscience, perhaps not, but do you keep up with the Jonses, or look on enviously from the moral high ground? Each individual has to make their own judgement on that.

Ultimately, this is a pretty seismic event, heading into what is already going to be a big summer. Could ownership/boardroom struggles impact the other decisions that have to be made and the work that has to be done? Of course. This could become quite turbulent in many ways. Hopefully the people involved will all act in the best interests of Arsenal, but there’s every chance an already ugly situation at this club could get even uglier.

The ideal scenario is that we come out the far side of it with owners who have genuine ambition, who look at Arsenal and see all the potential we have, from the stadium, resources, fanbase, infrastructure, history and everything else, and push us forward in a big way. No talking about how we can be as big as Bayern Munich, more action to make that a reality.

But let’s not pretend this is going to be simple though. It’s anything but, yet there may well be a crack of light in the Kroenke darkness, and that’s definitely something to be encouraged about.

Finally for today, check out yesterday’s Arsecast in which I chat with Amy Lawrence about the season as a whole, boardroom silence, player underperformance and lots more. I’ll be back tomorrow with a final preview of the Premier League season. Until then, enjoy the podcast.