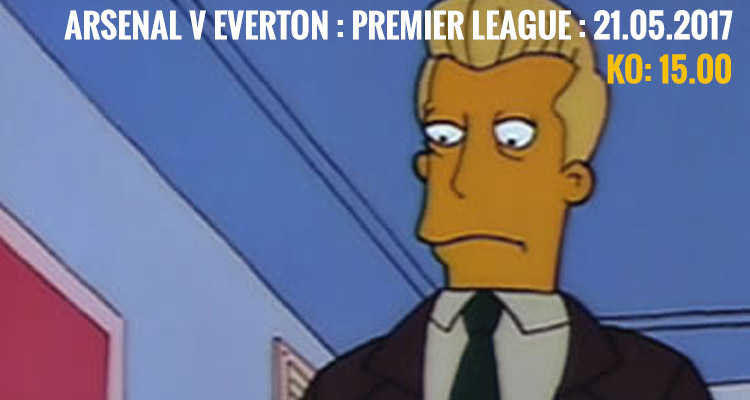 Here we go then, the final game of the Premier League season takes place this afternoon, and we face Everton at the Emirates.

People talk about how we need Liverpool or Man City to drop points, and of course that’s true, but we also have to make sure we win our own game, and it’s not going to be easy against a decent Everton side. As a manager Ronald Koeman was been a consistent thorn in Arsene Wenger’s side, and thus a pain in our arse, but hopefully we can continue our recent run of hoodoo smashing and come out on top today.

We’ve overcome the hex of Mourinho, the jinx of Southampton away, and our fearless little hobbits went to Mordor and overcome the Orcs of Stoke despite the fact they bribed an ent to play for them who scored with one of his spindly branches.

Today will require full commitment, not always easy when there’s a cup final on the horizon. Does that 50-50 become a bit more weighted towards the opponent just in case you pick up a knock? I’m sure they don’t really think like that, but it’s gotta be lurking somewhere in the back of the mind.

In terms of the team, I suspect he’ll go with as strong a line-up as he can. If Koscielny is fit, he could come back in, but given how important he is I hope we exercise caution if there are any doubts, or if there’s a risk of him missing the FA Cup final.

Aaron Ramsey is fit again, and should slot in alongside Xhaka, while the Welbeck/Giroud conundrum up front will be interesting. Would today’s selection give us an idea which one of them will get the nod for Wembley? As much as today is a game that has its own importance, it’s also one to help prepare for next weekend, so we’ll see what happens there.

Arsene Wenger says his focus will be on what we’re doing, not elsewhere:

Will there be another final day miracle? It doesn’t seem that likely, to be fair. Liverpool are playing an already relegated Middlesbrough who nobody would blame if they just went through the motions, while Man City travel to a  Watford side who have announced their manager will be sacked at the end of the season. Perhaps that might be liberating for them, but chances are it will mean this is a game they’re not that arsed about.

Whatever happens, we can’t points fingers at Boro or Watford. It’s not their fault we’re relying on them to do us favours. Our league form between the end of January and the end of April is the issue, it’s why we are where we are, and that’s entirely on us.

As I said on the Arsecast on Friday, as happy as I am with recent form and winning games, there’s a big part of me wondering where that kind of commitment and those kind of performances were when we really needed them. Still, that’s murky water under the rickety bridge now, and all we can do is go out and win today, and hope that Calum Chambers is a man mountain at the back, before striding through midfield like a very handsome Franz Beckenbauer and lashing a 92nd minute winner into the top corner at Anfield.

The reality, I suspect, will be more mundane but by 5pm we’ll at least have clarity over one thing about next season: what our European adventures will be. Will we once more scrape into the Champions League by the skin of our teeth to face the giants of Spain, Italy, France and Germany, or will we find ourselves playing on a Thursday night in Estrovia, Lichtenheim and the Republic of Karl?

Anyway, as ever we’ll have the live blog for you, as well as all the pre and post-game stuff over on Arseblog News. After what has been a difficult season, it’d be nice to end it on a positive note, whatever happens elsewhere, and to head into next weekend with some real positive momentum.

Further to yesterday’s news about Usmanov bidding for Kroenke’s shares, and all the rest, there’s not much to add. Other than it’s quite funny to see that the majority shareholder, all of a sudden, is able to communicate – telling journalists he’s in it for the long haul and this his ambition is to win the Champions League and Premier League with Arsenal.

What a shame he’s never felt the need to communicate that message outside of a time of crisis. And anyway, a line or two via the back channels to journalists who might be sympathetic to the message doesn’t really convince anyone of anything.

As I said yesterday, I remain convinced he will never sell to Usmanov, so our hopes lie with him a) either selling to someone else or b) it sparking a change in how he operates. I think the chance of either are quite slim, to be honest, but the first option is the more likely of the two.

Arsenal will continue to stagnate under Kroenke’s stewardship, he’s had majority control of the club for years now, and we understand his model of ownership is not really about achieving sporting success.

Wouldn’t it be amazing if we found some people who wanted that above all else? Let’s keep fingers crossed in that regard.

Right, that’s your lot for this morning, catch you later on for the game.