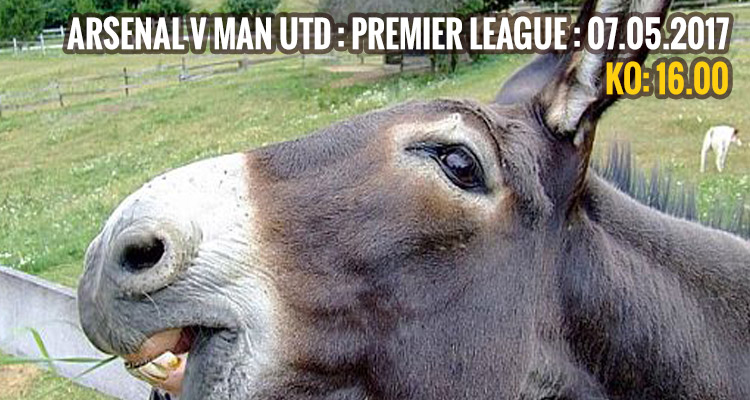 This day has not begun well because somehow there is no coffee in the house, and a cup of tea first thing in the morning does not provide the necessary kick. However, the sun is shining and I’m hoping it all gets better from here.

Today we face Manchester United at home, and by rights this should be a game that has a direct impact on the title. Arsenal v Man Utd – and it’s LIIIIVE, and we ought to be right in the mix (as should they). The reality, of course, is very different. This is a fixture which might have no significant impact on the top four, nevermind the title.

We’re currently 9 points away from fourth placed Liverpool – with two games in hand – so whatever slim hopes we have of making the Champions League places mean that nothing less than a win will do today.

Can we do it? Of course. Will we do it? I have no idea. Jose Mourinho says he’s going to rest players and put out a second string side but, as I said earlier in the week, I’m not having any of his nonsense. He might well rest some players before a game on Thursday, but the idea that a squad which has been assembled by a series of managers for hundreds of millions of pounds can’t be competitive is just daft.

When you take into our account our inability to play football and for our players to do simple things like pass the ball to each other and not let in stupid goals which make me want to punch myself in the face repeatedly, United could stick out 11 work experience lads with wellies on and it would still be a tough day for us.

Arsene Wenger has some decisions to make about his team. Like, should he pick an immobile target man centre-forward and then ask his team to play in a way which utterly negates the qualities he has? Which incompatible duo of central midfielders will he select? Should he ignore the fact that Hector Bellerin and Nacho Monreal are the best options if he’s going to play a back three? And, why is Gabriel?

Shkodran Mustafi is back in contention, as is Granit Xhaka, and if we’re doing a back three I would like to see him Laurent Koscielny and Rob Holding in it. I’d like to see Danny Welbeck in the team, and if there was room for Alex Iwobi too I’d have no issue with that.

Throughout this season, when we’ve played poorly, the manager’s reaction has been to give the chaps who played badly another go, to let them rebuild their confidence. It would be safe to say that this has not really worked, and after what happened at White Hart Lane on Sunday I’d have been inclined to take some of them out and give them a good thrashing, let alone put them back in the team for today.

Of course what I would do in an entirely hypothetical situation and what Arsene Wenger will do today are very different, but until later on I can take solace in the imaginary whip marks and screaming pleas for mercy.

In short, I have no idea what to expect today from Arsenal. If Mourinho does rest a load of players it will feel like the best chance ever for Wenger to finally get a league win over him, and thus make it all the more irritating when we don’t.

We’ve beaten Chelsea at home, in fairness, but also in fairness that was the period of the season when we weren’t playing like disinterested mules. Perhaps if we were slightly interested mules today it might work out better than I fear.

I hope so. I would really like us to win this game. I don’t have to explain why. Arsene Wenger says:

The players have been hurt by the results and the ­performances. We have got a cup final to prepare for and must look to win our league games until the end of the season to be in with a chance of being in the top four. They are focused.

We’ll see later on then.

We will have a live blog and all pre and post-game stuff over on Arseblog News, so join us for the game and all the other stuff too.