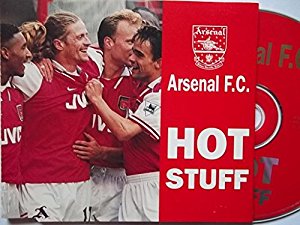 The humble FA Cup Final song is a tradition that seems to gone the way of the wagon wheel, the rattle and the rosette in terms of quaint footballing traditions. Arsenal have not recorded an official one since their 1998 take on the Donna Summer disco classic ‘Hot Stuff.’ The club were at the forefront of football’s first crossover with music when the 1930 squad released a gramophone disc of ditties.

The success of ‘Back Home’, the 1970 hit from the England World Cup squad, proved to be the catalyst for the popularity of the cup final song. Arsenal tapped into the trend by releasing ‘Good Old Arsenal’ ahead of the 1971 FA Cup Final. Since then, the Gunners squads of yore have tested their vocal chords with a variety of assaults (I use the word advisedly) on the hit parade.

The most instantly recognisable of all Arsenal ditties. Memorably, this song was written by football pundit Jimmy Hill, who felt that the Gunners needed an anthem to rival Liverpool’s ‘You’ll Never Walk Alone.’ The song went to number 16 in the UK charts, but has been inculcated into the terrace lexicon of match going Gooners ever since.

Sung to the tune of ‘Rule Britannia’ the refrain is a simple and digestible one, explaining its enduring popularity. “Good old Arsenal / we’re proud to say that name / while we sing this song we’ll win the game” has a pleasantly quaint feel to it. Much like Constable Morgan and the Metropolitan Police Band that regularly played on the Highbury pitch at half time, it feels quite ‘Arsenal’ somehow. Its simplicity and relatability have given it a timeless quality.

“Arsenal we’re on your side / our love we cannot hide / our hearts are open wide.” This effort by the 1972 squad is not high on lyrical innovation, nor is it the most uplifting of tunes. It sort of sounds like something a group of soldiers might sing on their way to war in a Broadway musical.

A good football song should either be stirring or at least good fun (‘Vindaloo’ for instance) and this is very much neither. The sentiment is sweet enough, but the vaguely militaristic beat in the background doesn’t really suit the syrupy lyrics. All in all, it sounds like a quickly forgotten Christmas song.

A favourite Arsenal song of mine. Roll Out the Red Carpet has a quintessentially late 1970s London music hall feel. With its self conscious cock-er-ney croon, it simultaneously puts one in mind of Millwall’s “Let ‘Em Come” and the theme tune to Grange Hill. It’s a shame that this song has come to be associated with a disappointing final loss to Ipswich Town.

Roll Out the Red Carpet has a knowingly anthemic, cheeky chappy tone. It’s cheesy, but it knows it’s cheesy so it gets away with it. I have always felt that Arsenal should walk out to this song at home games. The seamless count in between “Liam to Super Mac / we’re gonna knock in four or five…. SIX, SEVEN EIGHT…..” gets the “hands clapping, the feet tap tapping.”

In lieu of penning a bona fide classic like ‘World in Motion’ or ‘Three Lions’ this feels very much like a football song should feel, fun without ever dipping its toes into ‘whacky’ waters. It’s gonna roll, roll, roll to Wembley, man.

1993- SHOUTING FOR THE GUNNERS

Tippa Irie & Peter Hunnigale’s 1993 attempt climbed to number 35 in the UK charts, when it was released prior to the FA Cup Final with Sheffield Wednesday. I still have this on cassette somewhere, but I literally wore it out through repetition as a 9 year old. The song tries to channel the clear love of reggae that Kevin Campbell and Ian Wright demonstrated in their choreographed goal celebrations. (Irie is heard reciting the names “Mr. Kevin Campbell and de Ian Wright” several times during the song).

This song goes for a credible pop reggae crossover sound. Hunnigale and Irie teamed up six years earlier for combination reggae release ‘Ragamuffin Girl’ and, like Campbell and Wright, hail from South London. ‘Shouting for the Gunners’ has a Charles and Eddie reimagined as a terrace chant vibe. Tippa Irie would later go onto feature on the Black Eyed Peas’ 2003 track ‘Hey Mama.’

It probably tries a little too hard to be a credible reggae track, which is a difficult trick to pull off with a football song. But it’s catchy enough by a pair of serious artists. Some of Hunnigale’s vocals are slightly overwrought, but probably not enough to prevent you from squawking “I know that you know…” into your hairbrush.

Almost unrelentningly naff reworking of Donna Summer’s 1970s disco classic. But those of us of a certain age will probably forever hear the opening bars of the original and respond with “started out the season, nothing stopped us…..”

The song latches onto the popularity of a scene in the 1997 British film ‘The Full Monty’, in which a clutch of amateur male strippers choreograph a dance routine to ‘Hot Stuff’ by invoking the famous Arsenal offside trap.

The words in the chorus are swapped over so that Summer’s “Hot Stuff” refrain is actually replaced by “The Arsenal,” so it doesn’t even really work from that perspective. Contains the world’s most microwaved lyric in the final verse, “Give a shout for Platty, Hughesy, Bouldy and Alex” in quasi-commemoration of the 98 squad’s bit part players.

The lyric is so drenched in thoughtless birthday card sentiment that it ends up damning those players with faint praise. However, the actual tune itself, most notably the memorable bassline, is left untampered with, which saves the song a little. As does the payoff line “keep telling us we’re boring, we’ll just keep on scoring now.”

Those of you that bought the single might recall the B-Side “You Better Believe It, We’ve Done It Again” which is, all at once, the best and worst thing I have ever heard committed to record. Just listen to the way the singer interprets the line “Seaman has made the saaaaaaave of the year.”