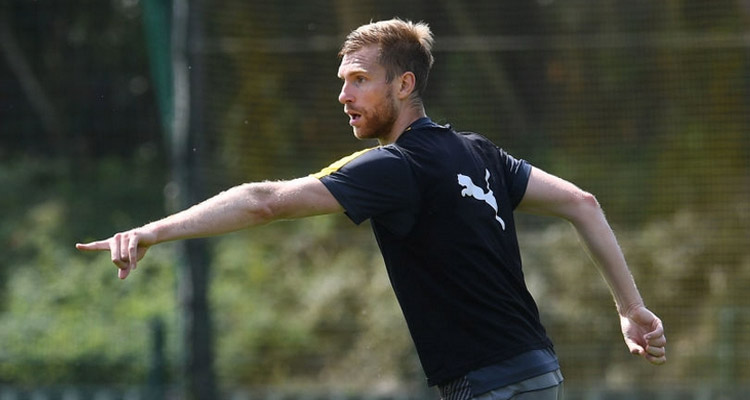 Morning, a very quick blog for you as I’m on the move and I woke up later than I should have. You see, when I have to travel the next day, I’m often struck by a sort of insomnia. I’m exhausted, but then I just can’t sleep. So, in order to avoid that last night, I had some drinks.

When my alarm went off this morning at the usual time, I woke up but clearly eschewed the BLUE SNOOZE option and went for the RED OFF option and then woke up an hour and half after I should have. Still, it’s better than lying awake half the night with Chandelier going around and around in my head.

Anyway, onto matters Arsenal and our defensive worries ahead of the FA Cup final are pretty worrisome indeed, in a most worrytastic fashion. We know we’re without Laurent Koscielny, suspended after his red card against Everton. Gabriel’s knee injury is not as bad as feared, but it’s still going to keep him out until August at least, and that’s compounded by the concussion suffered by Shkodran Mustafi.

He was too ill to play against Everton on Sunday and, reportedly, when he tried to train this week still felt unwell and dizzy. Concussion isn’t something you can just deal with by being all macho and manly. Of course he’ll want to play in an FA Cup final, but you can’t play someone whose vision, balance and reflexes are banjaxed.

Sure, we all remember that Paul McGrath story when he was playing for Aston Villa and in the early stages of a game went down ‘injured’. The physio came on and McGrath said he couldn’t continue as he was, due to his drinking problem, seeing two balls.

‘Just head both of them’, was the reply, and he carried on, but that’s a very different thing. If Mustafi has been so badly affected by concussion he hasn’t been able to train for over a week, it’d be a huge risk to play him at Wembley. Not simply for the team, but for the player himself, as any further head injury could prove very dangerous indeed.

So, that led many to think we’d field a back three of Holding, Mertesacker and Monreal, with Gibbs at left wing-bacl but it also turns out that Gibbs is struggling with a thigh injury and could miss out. Quite what that would do to our plans remains to be seen. A back four with Per and Rob Holding, with Monreal at left-back? That same back three with either Bellerin or Oxlade-Chamberlain shifted over to the left? Whatever Arsene Wenger does, it’s far from ideal, especially when facing a side as dynamic as Chelsea.

Even the selection of Mertesacker is a bit of a risk, as he hasn’t started a game all season. Asked if he would use him, Wenger said:

Per has the leadership qualities but I don’t know as he has not played 90 minutes for a long time. I have until Saturday to make that decision and I have not made up my mind yet. It depends a little bit on the system I will go for, the system I will choose.

I don’t see how we have any other choice to be honest, but he’s experienced with fresh legs, so hopefully that will work in our favour. The German himself admitted he’s been frustrated by being sidelined for this campaign, but says he’s ready if needed:

I haven’t played this year but I have done this for 15 years so I expect myself to be absolutely ready no matter what comes. That is my mindset, no matter what happens or what is facing me on Saturday, I am going to go for it. I owe this to this team and to this club. I want to make sure I will be ready and my mindset is 120 minutes plus penalties.

Anyway, how is he supposed to head home the winning goal if he doesn’t play? We’ll have more on the potential team for Saturday over the next couple of days.

Meanwhile, the club have announced that the screening of the game due to take place at the Emirates on Saturday, and any potential victory parade, have been cancelled in the wake of Monday night’s terrorist attack in Manchester. I know some view this as letting those people win, but the reality is that resources are already stretched, and it’s the right and sensible thing to do.

In a week in which 22 people, including children, lost their lives and scores of others were injured, this is little more than a minor inconvenience. Of course it’s a shame that it has to happen, but in the grand scheme of things it’s trifling.

The game itself is on, although there will be heightened security measures on the day, and there are plans to remember the dead and injured on the day.

Right, that’s that. We’ll have news throughout the day on Arseblog News, and I’ll be back tomorrow with an Arsecast that’s going to be recorded live tonight at Union Chapel. Looking forward to seeing those of you who have tickets, and the rest can pick it up as usual as a podcast tomorrow.