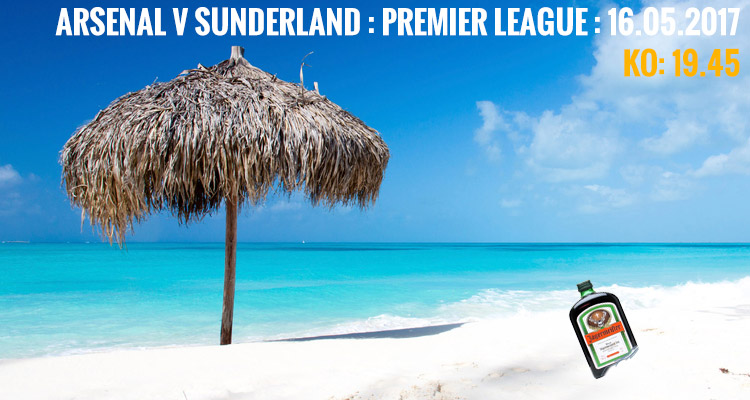 Tonight is our penultimate Premier League game of the season. We face relegated Sunderland at home, knowing that three points are required to keep up the pressure on Liverpool and Man City ahead of Sunday’s final round of games.

I am expecting some changes tonight. The recent schedule of three games in seven days is sure to have left us with some weary legs, some aches and strains, and in his team news update yesterday Arsene Wenger revealed Laurent Koscielny had suffered a recurrence of the calf problem he’s been managing over the last little while and is a big doubt.

Kieran Gibbs is back in the squad, so he could come in on the left, while Gabriel is another option for the back three. Alexis Sanchez, who came off against Stoke, looked like he was involved in full training yesterday, but if I were the manager he’d be rested tonight along with Mesut Ozil.

The quality of the opposition may well play a part in the thinking, although we’d be wise not to underestimate anyone – especially after the manager’s comments yesterday about teams not giving their all (more on that a bit later). If it was designed to motivate teams who have to play our top four rivals, why wouldn’t it do the same for Sunderland who will want to finish the season with some kind of flourish?

Anyway, Alex Iwobi, Mohamed Elneny, Lucas Perez, and maybe even Theo Walcott (despite the fact this system doesn’t really suit him), are all candidates to come into the side and add some fresh legs. Many of them haven’t played for weeks, due to benching/injury, but I’m sure they’ll also be keen to remind the manager of what they can do ahead of the FA Cup final – even if their chances of making that team are slim.

Arsene Wenger was sounding a message of positivity, as you would expect with just three games left this season. He’s rarely a man to dwell on the negative, at least not in public, and he’s hoping recent form will continue tonight:

I’m very positive because it looks like we’ve got stronger in every single game. Against us, the other teams fight and we have to dig deep every time to win the games. We’ve won six of our last seven games and we have created the momentum again after having a period where we were not stable away from home. We look strong again now and we’ve won our last three away games, so it’s positive.

I don’t need to tell you how Arsenal it would be to win the last three games then somehow contrive to make impossibly hard work of this one, so fingers crossed we can do what we need to do efficiently tonight. If we can, it’s all down to the final day of the season and what happens then.

Which probably goes some way to explaining Wenger’s comments about other teams, knowing that Boro are relegated and have barely even got pride to play for at this point. I can understand it, but that old saying about people in glass houses seems apt.

Yes, we have two leagues. For example, we had to fight very hard at Stoke and Southampton, but some teams once they are safe have a breather which didn’t happen ten years ago. Morally it has changed a lot.

Some teams turn up, some teams are on holiday. It’s very difficult to plan. You just want your team to do well and to focus completely until the last. I think to be professional is to do your job properly until the last second of the season.

I guess he’s doing what he feels he has to do, some ‘mind games’ which might have some impact on Sunday’s fixtures, but it’s difficult to complain about teams who have nothing to play for going on holiday at the end of the season when your own team did exactly the same mid-season when they still had plenty to work towards.

Watford at home: The Arsenal players were living it up in Ayia Napa, hanging out with Page 3 girls and blokes with their own names tattooed on their neck, just in case they forget.

West Brom away: Instead of turning up for an important game of football, the chaps thought it would be hilarious to play like they’d spent a week in Santa Ponsa seeing who could take the most pills while dancing topless at a club night being DJd by Calvin Harris and Paris Hilton.

Crystal Palace away: Forget the match fellas, let’s Fly Emirates to Dubai, to a city created in the desert with all the soul of a gold telephone, and stay in a seven star hotel where we can scorch ourselves in the sun as rich people leave their children with indentured servants to drive around in their fuel-guzzling cars before ending up in a nightclub with orange-tanned ex-pats and Daily Mail photographers who got a picture of one them drinking a pint of Jagermeister before vomiting into a woman’s handbag and then laughing.

That’s not even mentioning the lads weekends away before Chelsea, Liverpool and Sp*rs. So, I get what he’s doing, but I don’t think it’ll work and the reality is you can’t question the morality of other teams and players because you find yourself in a position that is entirely your own fault.

Anyway, let’s hope we don’t have our eyes on sunny climes again tonight, and then we’ll see what the final day brings us.

Before we go, check out yesterday’s Arsecast Extra in which we relive and enjoy the 4-1 win over Stoke, James has a croaky voice, there are lots of listener questions, and we have exciting news about an extra podcast this week. Check it out below.

Right, that’s that. News throughout the day on Arseblog News, and we’ll catch you later for the live blog and all the match related stuff.