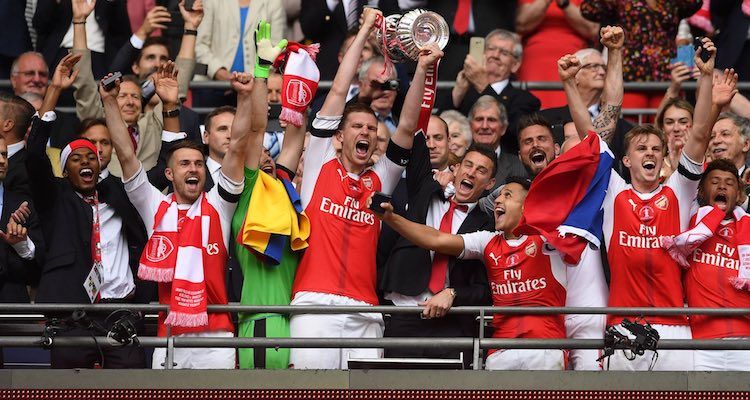 I don’t really know where to start this morning other than to say I am quite hungover, I’ve got no voice left, but you know, we won the cup. A cup we’ve won more than anyone. A cup that makes Arsene Wenger the most successful FA Cup manager of all time. And I had a great day with lots of friends and Arsenal fans who also had a great day.

The manager did pick David Ospina. He also picked Per Mertesacker for his first start of the season, Alex Oxlade-Chamberlain at left wing-back and Danny Welbeck up front. In some cases he had little choice but worries about those selections were dispelled by what was a fantastic Arsenal performance.

From the first whistle you could see we were on it. We moved the ball about well, passed it with pace and took an early lead in contentious style. After Aaron Ramsey had worked hard to win it back, Alexis appeared to handle it on the edge of the box, the Welshman was also offside but as Sanchez came from an onside position he stopped and allowed the leading scorer to slice the ball into the net.

The linesman had his flag up, Anthony Taylor went over to consult and gave the goal. Chelsea’s players were furious, but I was not. I was, in fact, delighted and high-fived a kid behind me after I’d finished jumping around.

By half-time we should have been further ahead. I was worried that the missed chances would come back to haunt us, but it was clear we were the better side. Chelsea had to clear off the line more than once, and it was about whether or not we could keep it up for the second half.

“I quite fancy a Chelsea red card,” I said to the chaps I was with. They agreed that this would indeed be a good thing. When Chelsea did come forward, they found a resolute, stubborn defense willing to throw everything in front of the ball, some of the blocks were tremendous and this was a defence putting it all on the line when needed.

They brought Cesc on and I was a bit worried by the former player coming back to to damage thing, but somehow I didn’t notice Victor Moses getting booked. Which is why, when he dived in our box to try and win a penalty, his second yellow card was an absolute treat. It was hard to understand what was happening – that Anthony Taylor was making decisions that didn’t hurt us – but very enjoyable all the same.

Then they scored, which was deflating. It might well have been a saveable shot, but ultimately it didn’t matter. We brought on Olivier Giroud for Welbeck, and the Frenchman’s first contribution was to get on the end of an Alexis pass and clip a lovely cross into the middle for Aaron Ramsey to do it again and score the winner in a cup final again.

I spoke on the Arsecast this week about how Trevor Brooking’s goal in the 1980 final made me hate the term ‘stooping header’ but I am now reassessing that. I feel like I’ve found a previously hidden bit of love for it. I also love the fact that the Chelsea fans barely had minute to celebrate their 10 men getting back into the game.

The Arsenal giveth, and the Arsenal taketh away. How much does Aaron love a cup final, eh? What a man. The winner in 2014 and the winner yesterday ensuring that John Terry was sad and could not inflict upon the world whatever egomaniacal thing he had prepared in the event of a Chelsea win. And you know he had prepared something.

I could be fair to Chelsea and say they played quite well with 10 men, but I’m not of a mind to be fair this morning. Sure, Ospina had to make a great save from Costa, but at the other end we had chances to completely seal the deal. Ozil and Bellerin in particular came closest, but in the end the other goal didn’t matter, the final whistle went and Arsenal were deserved winners of the cup.

The fans cheered, I cheered, and Rob Holding went on a run around the Arsenal end that saw him go into the crowd at one point. And why not? The young man capped his first season at the club with a cup final win, and a great performance.

Alexis Sanchez was the official man of the match, but you could have given it to almost any of the others. What about Mertesacker, starting his first game of the season and playing in a back three for the first time in his career? He was absolutely outstanding and what a way for him to finish what has been a very difficult campaign. I thought his decision to lift the cup with Laurent Koscielny was first class too.

I’m especially proud of the way we won this time because we had to play against Manchester City in the semi-final here and then Chelsea here. You cannot get tougher. We had two outstanding performances so this cup was won with special spirit and special attitude.

And look, I’m taking nothing away from winning in 2014 and 2015. I loved both those finals, but in the same way parents lie and say they don’t have a favourite child, this was my favourite FA Cup win of the three. The quality of the opposition, the circumstances, the injury crisis, and the pressure we were under made this one just a bit extra special.

Some will say Chelsea weren’t really up for it, but I don’t buy that at all. They had the chance to do the double, every player wants to do that, so this was not an inconsequential game for them. We just played fantastically well on the day, and that’s where the focus should be.

Also, anyone who says the FA Cup is meaningless must be basically dead inside. Yeah, we understand it’s not the Premier League or Champions League, but it’s a brilliant trophy to win and now nobody has won it as many times as we have.

Of course there’s time for analysis, what it all means and how it might affect things going forward, but right now we just have to enjoy it because days like yesterday are special. They don’t come around that often, so you have to soak it all up.

It’s definitely going to be a busy week, not simply because there’s a lot to talk about when you win a trophy, but because of what’s going on at board/managerial level. Today, however, is about that great victory at Wembley.

It was a great day out with good mates, and as always it’s been a pleasure to share this with Arsenal fans online and off. Thank you all for your support during this season, great to see some of you yesterday, now it’s time to bask a bit in the success.

WE WON THE CUP!