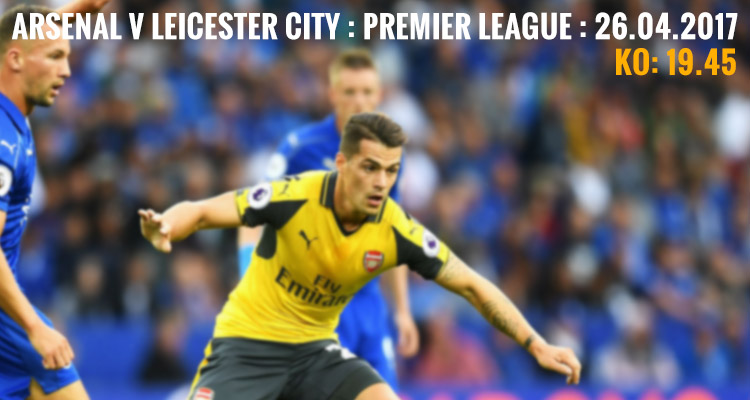 This evening sees us play the first of our seven Premier League ‘cup finals’, taking on champions Leicester at the Emirates.

Team news is in short supply, beyond the fact we don’t have any fresh injury problems after Sunday’s win over Man City. The manager must be thinking carefully about what kind of team he selects tonight though, and playing 120 minutes at Wembley is surely going to have some kind of impact. Especially as we have the small matter of a North London derby on Sunday.

Worries over Alex Oxlade-Chamberlain seem unfounded, his departure from Wembley on crutches was described as ‘precautionary’, and he was in full training yesterday. Lucas Perez appears to be back in action too (at first glance he looked a little like Santi Cazorla and my heart skipped a beat), but maybe we’re overthinking it.

Maybe they don’t need as much rest as we seem to think. They’re professional athletes, this is their job, and keeping some momentum going is more important than rotation. I suspect we might see a couple of tweaks here and there, Welbeck for Giroud perhaps, and there’s scope to do something with the wing-backs, but beyond that let’s keep some faith with the guys who did the business on Sunday.

Regardless of who he selects though, the attitude has to be the same. There’s always a little fear that a team struggling in the league can get themselves up for the cup before reverting to type, so hopefully that won’t be the case tonight.

What we saw at Wembley were players all pulling in the same direction, nobody shirking their responsibilities, and the benefits of that were evident in how we played and, very obviously, the result. If we can replicate that tonight, then we have a good chance of taking three points. Anything vaguely like Palace/West Brom, I think we know what happens.

Arsene Wenger believes the team will need seven successive wins in the Premier League to reach the top four, a tall order, but it has to start tonight:

That has to be the target. To achieve that, we have to win the next one. I think the next thing we have to achieve is to transfer the energy level we showed on Sunday to the Premier League. We started well at Middlesbrough, so let’s continue that against Leicester.

The semi-final win will give us a bit more confidence. I think it will convince everybody that with the right energy levels and the right fighting spirit, the right togetherness, we can beat everybody.

As delighted as I (still) am with beating City on Sunday, this team still has a bit of work to do to convince people the corner has been turned. A win tonight would go some way in that regard, so fingers crossed we can do the business again.

Elsewhere, the manager admitted he was working on transfers for the new season, but denied this gives any indication as to his future intentions. I have to say I’m not convinced by that, even if he point-blank refused to answer any further questions about it. He says:

No, I work until the last day of the season for the present and future. And the transfer targets are the future of the club and very important.

Which is understandable, but does a manager who is planning on spend time on bringing in players that a new manager might not want to work with? Even in the topsy-turvy world of Arsenal that makes little sense.

He also spoke about the future of Alexis Sanchez, and while he was steadfast that the club would not sell to a Premier League rival, he didn’t sound much like a man who is planning on being anywhere but North London. On Sanchez heading into the final 12 months of his deal, he said:

If he doesn’t sign a new deal, will I make him stay? Yes.

You want to be as strong as you can be and not strengthen the other teams.

I realise we have some previous in this regard, but I cannot see any way a domestic sale could be sanctioned without it sparking the most flaming of pitchforks and ‘Down with this sort of thing’ banners. There’s no way it could be explained away or justified. Wenger also believes that Alexis wants to stay with Arsenal and delays are down to the terms on offer rather than dissatisfaction with the club:

I think he will sign and stay because, first of all, he is happy here. His desire is to stay. That is what I deeply believe. The disagreements are purely contractual – not on the desire.

Both parties have the desire to find an agreement, so I think it will happen.

I hope he does, and I hope we can convince him. Losing a player of his impact and stature would reflect so poorly on us, so let’s see what happens. The manager’s final comment of ‘It will all be decided in the summer’ suggests to me at least that he’s not leaving this for someone else sort out, and he’s planning on being in charge next season.

But then I think many people suspect that’s the case anyway. For now though, all we can do is focus on tonight’s game, and hope the Arsenal that looks like the Arsenal turns up again.

As ever we’ll have a live blog and all the pre and post-game coverage you need over on Arseblog News. Catch you later for the game.