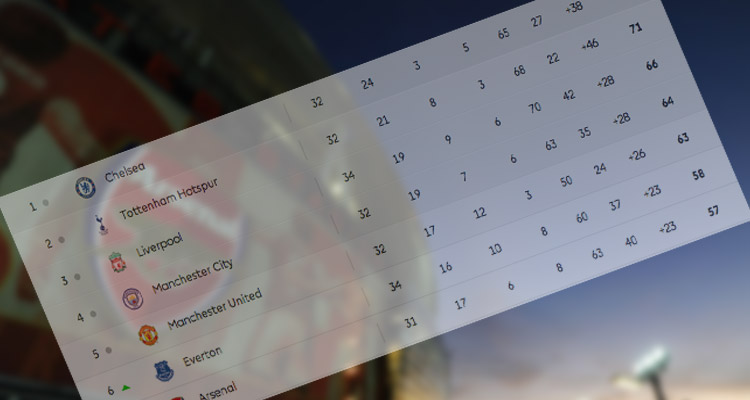 Having reached the FA Cup final on Sunday, Aaron Ramsey reached into the big book of football cliches and pulled out a classic.

With a top four chase now the priority, the Welshman said:

It was important to win to have something to look forward to at the end of the season but now we have another seven cup finals to try and finish off and get into that top four.

He’s not wrong though, and if that’s the way Arsenal have to approach these upcoming games in the Premier League, then so be it. But it’s going to require something almost flawless from us, and given the fixtures we have it’s a lot to ask.

Looking at the table right now, with 57 points on the board seven wins would give us a maximum of 78 points. Liverpool’s maximum is 78, Man City’s 82 and Man United’s 81. I’m discounting the idea of catching Sp*rs who already have 71, but if they felt like the collapse to beat all collapses, I’d be absolutely fine with that.

So, let’s look at the fixtures we have to contend with to reach that 78 point figure that would maybe give us a chance of top four:

I can’t remember a run in that tricky in ages. The champions tomorrow night, followed by a North London derby, then a game against a Mourinho side. Southampton away has been difficult in recent years, we never enjoy ourselves much at Stoke, and while Sunderland is about the only ‘easy’ game in that run, the final day against a pretty decent Everton side will be a test again.

As I said yesterday, there was a lot to like about what we saw on Sunday from Arsenal. Players who looked like they cared put in the effort and got a big result, but it’s too early to say if we’ve turned the corner. Tomorrow night against Leicester will give us a better idea of that, and then the derby on Sunday will be the true test of what’s left in this side’s tank.

With so many games coming up in quick succession, squad management will be important at this stage of the season. Legs are just that little bit heavy, and keeping players as fresh as possible will be a big part of the manager’s job. Injuries picked up at this stage of the campaign – with just weeks to go – become season-enders, so there’s a lot to take care of.

We should get more thoughts from the manager on Sunday, and what lies ahead, when he meets the press this morning ahead of the Leicester game. We’ll have all the team news and everything else over on Arseblog News, so join us for that.

A couple of small things this morning, firstly Hector Bellerin says he wants to play for Spain at the Under 21 European Championships this summer. Last week Arsene Wenger said that it ‘wasn’t ideal’, and he felt it would be better if the 22 year old took the summer off and had a rest, which is understandable.

That has led to a rake of headlines about this story which say that Bellerin is set to ‘defy’ his manager, or upset Wenger, or is somehow in conflict with him over this. All of which ignore the other thing the boss said when discussing it:

The Spanish players love to play for their country, and I think he will go as he loves to play for Spain.

Wenger is long enough in the game to know that this is exactly what will happen. Saying he thinks it’s better if Bellerin has a rest is just a manager thinking about what’s best for his player ahead of a new season, it doesn’t mean he has expressly forbidden him from going or that if the player goes he’s somehow sticking two fingers up at his authority.

But then I guess in this clickbait world we live in, ‘Player does exactly he’s entitled to do and what manager expects he’ll do’ isn’t the most attention grabbing headline around.

Secondly, the issue of safe standing is one that is being championed by the FSF, and earlier this year the AST carried out a survey of Arsenal fans on the issue. We linked to it from this site, and over 7000 people responded.

The results show that Arsenal fans are overwhelmingly in favour of the idea, with more than 96% in favour of safe standing at football grounds. It’s rare to see an issue in football that doesn’t divide people, this is landslide territory, and there’s no question that atmosphere has suffered across English football since the introduction of all-seater stadia.

We all know the reason that was implemented, but what terracing was back then and what safe standing is now are two very different things. This BBC video about how it works at Celtic is really interesting and shows the advances made, and while it’s not something that’s going to happen in the immediate future, it’s something that the people who run football clubs and run the game should pay close attention to.

I’m not even sure how it could be implemented at the Emirates Stadium, but it would be amazing to have a standing section. The energy it would bring to our ground, and to so many others in the Premier League, would be fantastic. It feels like this is one of those things that if and when it does come into play, people will wonder why it took so long for us to do it.

For more on the wider issue, check out the FSF.

Finally for today, I’ll leave you with this week’s Arsecast Extra, in which we discuss the FA Cup win over Man City, how James’ illness brought about the team’s revival, three at the back, we try and name a listener’s puppy and lots more.

Happy listening, more tomorrow as we look forward to Leicester.