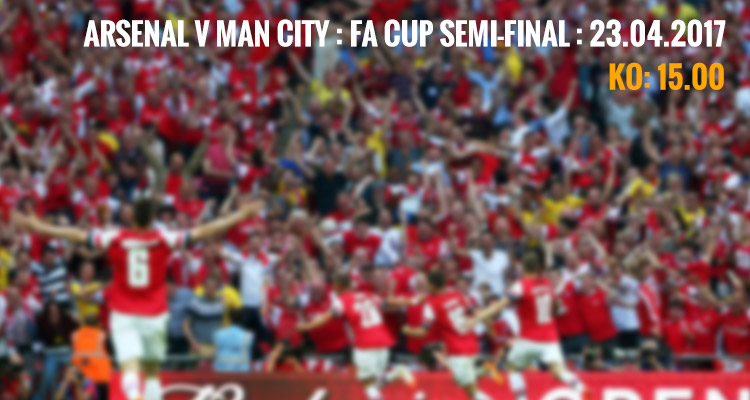 It’s an FA Cup semi-final today, and whatever you think about what’s going on in general, all the focus today should be on a game which brings us closer to the possibility of a trophy.

There are some questions going into this one, and issues for the manager to deal with, such as:

Back three or no back three?

Having radically changed his system for the first time in 20 years to cope with the threat of the lowest scoring team in professional football this season, it would be odd if Arsene Wenger changed back so quickly. I think we could probably have scraped a win against Boro with a back four, so the only real logic I can see in using a back three was to test it out ahead of today’s game.

Shkodran Mustafi remains sidelined with injury, so it’s likely to be the same three – Gabriel, Koscielny, Holding – that played at the Riverside. While I think this is a system that would really suit Per Mertesacker, it would be mad to consider him today. No matter how experienced you are, playing your first game of the season in April – and that game being a cup semi-final – is being thrown in at the very deep end.

I’m not sure it made us much more defensively solid against Boro to be honest, but if the intention was, as the manager said, to give the team something different to help them rebuild confidence, it’s got to be something he continues with for a few games at least.

Will Guardiola set out his stall to try and counter a back three? How flexible are we if that happens? I wish I knew.

Bellerin or Oxlade-Chamberlain on the right?

Again, a big decision. The Ox was really good against Boro, perhaps our best player on the night, so it would be harsh to drop him. Bellerin’s struggles with form have been obvious, the manager speaking quite publicly about it, but I do wonder if Oxlade-Chamberlain might be a decent shout for the left-hand side with the Spaniard coming back in on the right.

I suspect that’s probably being a bit too experimental, and the manager will want the security and experience of Nacho Monreal, but it’s worth considering.

Who starts up front?

Olivier Giroud started there on Monday, and was largely ineffective. This was as much down to lack of service as anything else, but in reality out of all our forwards he’s probably the easiest for the opposition to negate. They know what he’ll do, how he likes to receive the ball, and how to cut off supply lines. Of course he can cause problems, but today I’d be much happier seeing him on the bench as a player who can make a contribution in the last 20 minutes if he’s needed.

If he sticks with the three at the back formation, I also think he’ll stick with Alexis and Ozil as the two to play behind the striker, so it leaves us with Danny Welbeck. The England man has been a bit of an injury doubt, but looked to take full part in training yesterday. His pace and movement, and ability to interchange with Alexis in wider areas, would be better for us if we’re trying to expose a back four which has had issues this season.

Will we turn up?

All talk of tactics and systems and formations is one thing, but so much is down to the players and how they approach this game. Will they be ‘up for it’? It’s unquantifiable of course, but there have definitely been times when we’ve registered pretty low on the Up-For-It-Ometer. The lure of an FA Cup final is surely sufficient though, and whatever else happens in terms of how we play, we can’t be found wanting in terms of effort and desire.

This competition is a way of salvaging something from a season that has disappointed and frustrated. Fans want to see their team win things, lift trophies, and we’re just two games away from doing that so let’s hope that’s reflected in the performance today.

Arsene Wenger is urging his team to have a real go at City today, saying:

You need to be absolutely at your best. Sometimes the pressure from being super-favourite comes from the fact that you’re a bit scared of taking the initiative.

You play a little bit with the handbrake on, but in this situation we know that City are a very offensive team so we will need to defend well as a unit. We need to take every single chance to go forward and put them under pressure.

Please, no handbrake. Please, no lacking a little bit sharpness. Please, don’t stand around at corners and wonder who was supposed to be marking Otamendi after he scores a header. So much of the rest of this season rests on this game, fingers crossed we can do what needs to be done and make the final.

If we do, it’s Chelsea – which I’m glad of. I watched yesterday’s game and Sp*rs set a new record of seven successive FA Cup semi-final defeats. You have to laugh. I know it’s not all sunshine and roses in our garden, but there’s still time for us to come together and enjoy that. The laughter window might be short, depending on what happens today, but that doesn’t mean we shouldn’t take that chance.

Right, that’s that. We’ll have a live blog and all the post-game coverage on Arseblog News for you later on. For now, bacon sandwich, dog walk, and then the Arsenal.