“Now, man who shot a dozen people, what do you think of gun control?”

Thanks to everyone who pointed me in the direction of Charlie Adam on BBC 5 Live last night talking about tackling in the wake of Seamus Coleman’s injury on Friday night.

Now, I’m not saying it’s like having a member of the Ku Klux Klan to give balance to a discussion on racism but, you know, blimey. Ask Gareth Bale – not my favourite person mind, but still – if he thinks Adam did him here. Or here.

Ask Olivier Giroud when he stamped on him here. Or maybe ask his Stoke teammates when, earlier this season, he broke stride so he could stamp on Alexis Sanchez, thus allowing Alex Iwobi the split-second of space he needed to score a decisive goal.

Or that time when put Alexis in a choke hold and still managed to avoid a red card. Of course that wasn’t a nasty, over the top, studs-first tackle so that doesn’t count, right? 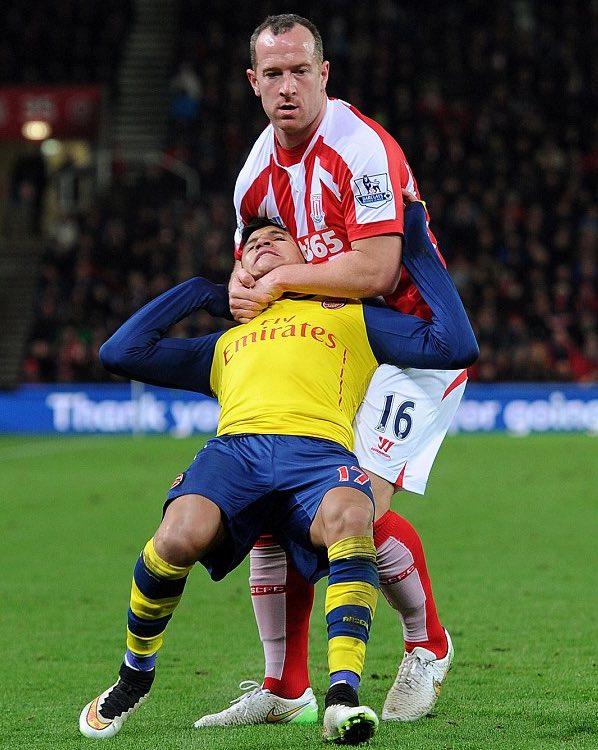 I mean, there needs to be a serious discussion about tackling in the game, and the fact that some players 100% do make a decision to go in high and late, despite knowing the potential consequences. They know they may get away with it via the referee, or even if they don’t the most that’s going to happen to them is a three game ban.

It’s up to you to decide if Charlie Adam is one of those players, but for me if his appearance on 5 Live had been a bit of a ‘mea culpa’, where he admitted he had done that in the past but would now reassess the way he behaved then it would have real merit.

But barely three days after we saw a player suffer a double fracture of his leg, an injury that will keep him out of the game for a minimum of 9 months, the BBC got a guy on who has got a history of making challenges which can inflict serious damage to an opponent.

This is what I mean when I say that the media play their part in this. As the shock of seeing Coleman’s injury subsides, it becomes easier to bring on those people who look to excuse that kind of behaviour, and it shows a complete unwillingness to address the issue seriously. The insistence that Neil Taylor wasn’t looking to ‘do’ Coleman is irrelevant, all that matters is he did and that should be the only basis for debate.

With the greatest respect to our chaps, it’d be like inviting Mesut Ozil on to talk about being a hard man, or having Per Mertesacker at the centre of a discussion about how being short and nimble can be an advantage.

“Now on BBC 5 Live, we talk about how lifestyle, fitness, eating well, looking after yourself, low body fat, and and more can help you in your footballing career. With us a man who knows about all of things very well, welcome to the show … Tomas Brolin.”

Ultimately, would we not be better of hearing from a player who has gone through the mill because of a serious injury inflicted by a bad tackle? I know I focus on the Ramsey, Eduardo, Diaby incidents, but that’s because they’re Arsenal related and I know them well. I’m sure there are countless more that fans of other teams could cite as examples, and I think we’d glean more from their insight than anyone else.

Leaving aside the need to talk about the kinds of challenges that can cause damage, in yesterday’s Irish Times, Ken Early wrote about how referees and officials must play their part in helping to eradicate them from the game:

If referees started enforcing the rules, there’d be some annoying red cards in the short run. The trade-off would be worth it in the long run, as it became accepted that any high, studs-up challenge was going to get you sent off. The players would adapt and you would see a massive reduction in dangerous play.
Anyone who doubts this should remember that it was still legal to tackle from behind until 1998. Then the rules were changed so that tackles from behind got you sent off. Nobody tackles from behind any more. Players can change their ways, but as long as the rules against dangerous play are not enforced with any consistency, they have no incentive to.

Hard to argue with that, but is there a willingness to accept that from fans? Granit Xhaka’s red card against Burnley divided Arsenal supporters, some thinking it was a red, others that it was harsh because there was so little contact with the opponent.

But would it have been so divisive if there was more consistency applied by all referees across the Premier League, and beyond? So it’s not the contact, or lack of it, that’s being punished, but the action which, on another day or with a little more ill-fortune, might cause serious damage.

Is that a decent trade-off so we don’t have to see any more players with their legs snapped in two, or is the desire to see the crunching tackle, taking the man and the ball and everything else, still more important to football fans?  I’m not sure I have all the answers, but I am pretty sure that Charlie Adam doesn’t lend a great deal to a discussion on foul play either.

Right, not much else going on. The Interlull more or less finishes this evening. Alexis Sanchez is in action for Chile when they play Venezuela, while David Ospina will play for Colombia against Ecuador, and with Petr Cech out of action with a calf injury there’ll be some eyes on him.

Finally, for today, a reminder about yesterday’s Arsecast Extra in which we discuss the Coleman incident, Thierry Henry as a potential Arsenal manager, why some burger places need to have their heads examined, and James showcases his incredible range of accents and voices. Listen and subscribe below, more from me tomorrow.