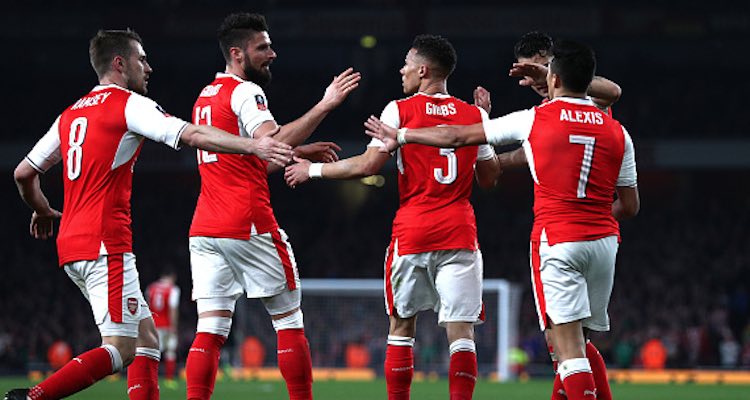 Supporting this football club, as I’m sure you’re all aware, can be trying at times. Our recent woes have tested the hearts and minds of many, but yesterday was something else.

In this time of division and divisiveness; this era in which fans pitch against each other; we desperately need something to bring us all together. If it’s not going to be football or the players or the manager, can we at least find common ground over the issue of Chris Sutton?

Honestly, having to listen to him for 90 minutes yesterday was interminable. The only thing that gave me cheer was that the better Arsenal did in the second half, the more miserable he sounded about it.

“Look at that, it’s embarrassing,” he said after Lucas Perez was clipped in the box and went down rightly expecting a penalty (forgetting that it was Anthony Taylor refereeing, of course). Even when replays showed the Spaniard had been tripped, he wouldn’t change his tune.

He was bleating all game, and when Mesut Ozil shouldered some lad out of the way his squawk of outrage when Taylor amazingly played on will nourish my soul for years to come. He was rendered almost speechless that Arsenal should be in any way physical, having spent the entire game talking up and defending Lincoln when they got stuck in.

Sometimes the best thing about winning isn’t winning itself, it’s the fact that the win makes other people so obviously miserable, and yesterday was one of those games for me. I’m delighted that we’re in a semi-final, I’m happy that we won a game – even against more lowly opposition – and while I understand people love to see underdogs do well, the BT commentary team’s performance was worse than our 10-2 aggregate v Bayern, and that’s saying something.

My only regret is that there wasn’t any commentary box video so I could have seen the sadness in his eyes.

As for the game itself, the first half was tough going. The team was more or less the one that lost to Bayern in midweek, and it looked like one that was pretty much bereft of confidence. There was a lot of passive football, playing the ball around without any real penetration, although there were some chances. Ramsey should have done better than side-foot wide, and Theo Walcott forced the keeper into a save that hit the post.

At the other end Cech had to make a save after their winger drove into the box and got a shot away, but in the 6 minutes of first half injury time brought about by stoppage time required after their striker elbowed Mustafi and then got one back from Koscielny, we went ahead. Walcott’s effort took a deflection on the way through, and you can argue whether or not it was a goal we deserved if you really want, but what’s the point of doing that?

The second half was pretty much all Arsenal, Lincoln looked to run out of steam pretty quickly and two goals in a couple of minutes sealed the game. First Giroud tucked home a right-footed shot after lovely work between Alexis and Bellerin saw the full-back reach the byline and pull the ball back for the Frenchman to score. Then Gibbs got forward and his low cross was turned into the net by a Lincoln defender.

A hilarious missed tackle in midfield – the equivalent of a fresh air shot in golf – saw things open up for Alexis Sanchez to curl home a lovely fourth, and the Chilean was involved in the 5th, playing his part in setting up a chance for Aaron Ramsey which even he, without his shooting boots yesterday on it’s fair to say, couldn’t miss.

Alexis hit the bar with a free kick late on and that was that. A not unexpected win for a Premier League side over a non-league one, no fairytale for the BT cameras, and Chris Sutton was miserable.

I didn’t want to gamble today because I knew that it was very important to win the game and I felt as well that the team had performed well against Bayern and I wanted to give them a chance to find their confidence back by winning the next game.

That’s why I maintained 90 per cent of the players in the starting line-up. They have been hit very hard after the game [against Bayern] and that is always dangerous because your confidence can go very quickly.

Still, all we could do was win the game and that’s what we did. Sections of the media scoffing at a 5-0 win would have been the first to stick the knife in and get the broken cannons out, so you’re damned if you do and damned if you don’t, but you’re obviously much better off if you do.

It was never going to be a win that undid the damage of previous results, but it was one which sees us progress to the semi-final of the cup, and the draw for that will be made tomorrow night after Chelsea and Manchester United hopefully kick the ever-loving shit out of each other. Manchester City are already through with a win over Boro, while Sp*rs face Milwall at home today.

It’s likely to be a very tasty semi-final line-up, but you’d rather be in than not, and for two rounds in succession we’ve delivered a knock-out blow to Sutton.