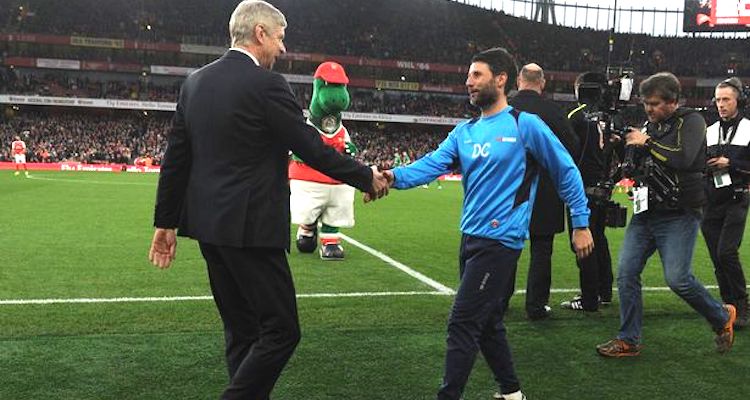 So, we know three of the four FA Cup semi-finalists. Arsenal, Man City and Sp*rs. The last of the quartet will be known later tonight after Chelsea play Man Utd at Stamford Bridge.

Whatever happens it’s going to be both exciting and nerve-wracking. A game against anyone other than Chelsea would see us play that side twice within a matter of weeks. We face Man City in the league on April 2nd, we travel to White Hart Lane to play Sp*rs on April 30th, and Man Utd come to visit on May 6th (this date might change for TV).

With the semis scheduled for the weekend of April 22nd-23rd, that would mean a cup game and a league game against the same opposition within a very short space of time. It could be fantastic, beating Sp*rs twice, for example, would be great japes altogether, but the other side of that coin … well, it’s not one worth thinking about.

And does playing twice mean you’re more likely to lose at least one of the games? I’m not a statistician or one of those guys who decides the odds for bookies, I think they’re called Bill Oddsie, but it just adds an extra layer of frisson to an already difficult situation.

Just beaten X, now X will be out for revenge. Just lost to X, are X all filled with confidence and belief and go into the game with a psychological edge while we’re filled with doubt? Of course if we’ve just beaten X that could apply to us too, but the dark part of my mind goes to that revenge place.

If I had any money at all, I’d bet it on United winning tonight and us drawing Sp*rs in the semi. Anyway, we’ll see what happens later on.

Meanwhile, some interesting stuff from Arsene Wenger on pundits. There are headlines this morning which are a bit misleading, but what he says in context comes across much better. He talks about how he often watches games again to properly examine what went on:

It’s always interesting to take a distance, because people keep your eye and brainwash you with what you think is right. I think it’s always very interesting.

I have mentioned it here before, and I do so again in the wake of Saturday evening’s horrendous co-commentary from Chris Sutton, but watching a game without commentary and punditry often results in people taking a much different point of view from what happened. There’s often a ‘narrative’ to the TV coverage that keeps getting hammered home.

I think things have improved somewhat with more studied coverage from Sky’s Monday night football, for example, but when you pay that much money for the broadcast rights, you can’t rely solely on the game to provide the entertainment. Sometimes, and I think we’ve all seen this, it can be manufactured, and I think that’s what Wenger is talking about here.

I really think that as consumers, who pay high prices for TV packages, there ought to be a no-commentary/stadium noise only option when we watch football. If you want to hear Martin Tyler and Gary Neville, then fine. If you want to hear Chris Sutton – what the hell is wrong with you? – but that’s your choice. But if you don’t, that should be available to you too.

I rarely, if ever, watch any pre-game, half-time, or post-game punditry. Unless there’s something particularly contentious, I want to avoid what they have to say as much as possible. And even then, with the recent Hector Bellerin getting smashed unconscious incident, they very often make you wish you hadn’t bothered.

Still, sometimes it can throw up some gems, like this one from Ian Wright at the weekend:

"You can't get into that party, Bruv." @IanWright0 you absolute god. Sutton is OWNED. ? pic.twitter.com/V305G0CycA

Made all the more glorious by Sutton trying to think up some kind of witty riposte but failing miserably. And that, folks, is what makes the internet great. You don’t have to watch the post-game stuff, if anything good actually happens someone will upload it and put it on Twitter. Thanks Sir Tim Berners-Lee, you probably couldn’t even have imagined what a service your invention would provide humanity.

And while Arsene Wenger the manager is under the most pressure and scrutiny he has ever been in his time at the club, Arsene Wenger the man showed he’s still great by spending an hour and half with the Lincoln boss Danny Cowley and his brother after the win at the weekend.

We had about an hour and a half with Arsene Wenger after the game and that will be invaluable, something we will cherish forever. The fact that he was willing to give us an hour, an hour and a half of his time after probably the week he’s had says everything about that man.

I asked lots of questions. After an hour and a half I’m sure they’d had enough. It was really insightful, a fantastic experience.

It’s why, even though I think Arsenal need a manager from a footballing perspective, I can’t abide the abuse and invective directed towards him. If people want to trumpet Arsenal as a club that does things with a bit of class, you can’t ignore the manager’s role in that. Especially when it seems to be sadly lacking in other areas, as the recent boardroom statement showed.

Right, that’s that for this morning. James and I will be here with an Arsecast Extra for you later this morning. If you have any questions or topics for discussion, please send them to @gunnerblog and @arseblog with the hashtag #arsecastextra.

That’ll be up for you before lunch, catch you then.