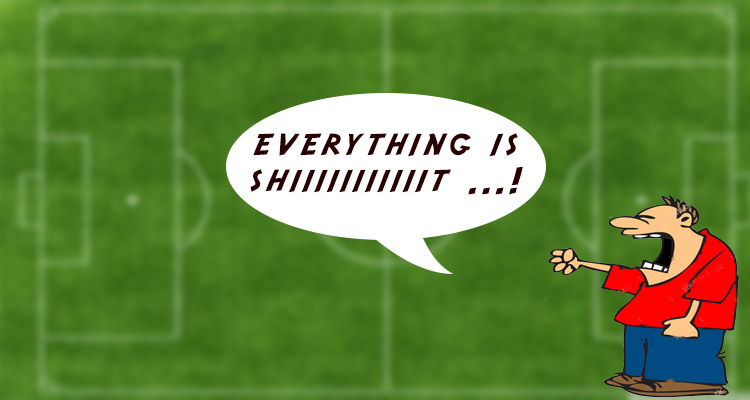 I guess people think being a football journalist is an easy job. I suppose, compared to digging ditches or being a nurse in an overcrowded, underfunded hospital, it probably is.

If you were one who worked their way to a position of writing for a national newspaper, you became a voice of authority, to some extent. But in recent years that authority has been slowly and steadily undermined by the advent of the Internet and the ability of fans to talk, often in far greater depth, about their own clubs.

On top of the that, the availability of coverage, information, behind the scenes footage and sources, being able to watch and stream every game in HD, podcasts, videos, etc, means that fans in general now know more and more about their clubs.

It also makes it more difficult for the traditional journalist to keep up in some ways, thus creating a bit of a vacuum between what they produce and what the reality is. Not all of them, of course. There are many fine writers who can spread themselves across the Premier League, for example, and produce intelligent, insightful pieces every week.

But let’s take Club Blogger 1, for example. Watches every game, the full 90 minutes every week, in invested and immersed in everything the club produces, reads other blogs, watches some videos, is engaged with fans across his own site, social media, email (that is still a thing!), and – assuming he’s not some kind of moron – has a far greater understanding of his club’s issues than, say …

Opinion Columnist 1, who only goes to a few games a year, because he has to cover other clubs and perhaps other sports. Maybe he blocks people on Twitter when they engage in a way he doesn’t like after they see a big discrepancy between what he writes and what the truth is as they see it. He might deign to tell these fans how they should think from the increasingly out-of-touch pulpit of his national newspaper column, then can’t understand why people might take issue with it.

Even when it comes to what happens on the pitch in those 90 minutes every week, it must be tough for the journalists to keep up in some ways. You might have two or three games over the weekend to work at, so before you write a piece about a club whose game you didn’t attend do you go back, download the matches, watch them in full and then make your conclusions, or simply work off Match of the Day, Goals on Sunday, or other highlights?

It can be done, but it certainly leaves something of a knowledge gap there. As I said, there are plenty who can do it, but others become quite seriously exposed and will have to adapt quickly or get left behind in a big way.

Now, just because you’re a fan or a blogger or video-maker or whatever, doesn’t mean you’re better or even any good at all. Clearly there are those people, fans of their clubs, who are not very good at what they do, how they do it, how they express themselves or anything else, but increasingly that doesn’t seem to matter.

But there’s an interesting shift in the media going on. Newspaper circulations are down and the industry itself is very much on the precipice as we move into an increasingly digital domain. TV viewing figures are down – 19% year on year – for various reasons, mostly the cost. The idea that having two broadcasters sharing rights provides competition was always daft, it just mean consumers had to pay two subscriptions instead of one. It’s no wonder people are looking for alternatives and when they can find them easily in the form of streams, they’ll take them.

Attention spans are another issue. One of the things we did on this site 5 or 6 years ago was introduce a live blog for each game. Ostensibly this was to provide a service to people who couldn’t watch the game or find a stream, but it quickly became a ‘second screen’ for people who were actually viewing the match. I can only estimate, but I’d say 75% – at least – of people who use live blog are doing so while watching the game itself.

They might want to just keep up with it, and Twitter, and other social media, while the game is going on to see what other people think. There’s a chat room in there too, people natter away for the whole 90 minutes as they watch their TV or stream. It’s an unintended consequence of the live blog, but that’s the way people are doing it.

They don’t want to wait for MOTD for highlights, the canny ones can find the goal clips within minutes, and full highlights almost immediately after the final whistle. It doesn’t mean you won’t watch Match of the Day, it just means you want more before you do. It’s why there’s often so much backlash because often the narrative plucked by the producers of the show can be very different from what actually happened in the game – and it’s worth remembering that it’s an entertainment show as much as one about football.

The demands of the newspaper industry now mean that opinion, however absurd, is good for clicks and hits, because to a large extent that is the remit now. How much traffic you can generate is, for some outlets at least, far more important than how much insight you can provide. That, in turn, widens the divisions between those who are being left-behind and the people who would traditionally have read their stuff.

Those who are smart are embracing the zeitgeist, look at Gary Neville and the somewhat manufactured outrage over what he said about the Arsenal fan at Chelsea and the Arsenal Fan TV stuff he saw outside. Not once did he says fans didn’t deserve an opinion, or didn’t have the right to an opinion, he simply took issue with the way those opinions were being expressed.

Now the lads who were so, so angry at Gary Neville, furious in fact, had a lovely sit down with him yesterday and it was all pictures and smiles and it works for Robbie (who is a very nice guy) and AFTV, and it works for Gary Neville and Sky because it keeps them in the spotlight too. It’s show business, maybe a new form of it, but that’s exactly what it is. It’s the modern media circle of life, and I do wonder what else it might spawn.

What happens when Gary Neville criticises, I dunno – Jurgen Klopp. If a Liverpool Fan TV lad takes sufficient umbrage and makes enough noise and gets enough YouTube views, does he get a visit to the Sky studios and a sit-down too? If not the first time, what about the second, or third, or fourth time? How loud or outrageous does he have to get to make it happen? You can be sure some of them will try.

I don’t really have any conclusions about all this by the way. I just think it’s really interesting to see how things are changing. Arseblog will be 15 this month, so we’ve grown up alongside all of this stuff, so it’s fascinating to watch the shift happen, and the way the rules of engagement have changed so radically. Ten years ago you could email a journalist or a presenter, if you could find that info, now everyone’s on Twitter.

For some that will simply be a way to send abuse, but focusing on that side of things – unpleasant and unnecessary as it is – obscures the fact that it can spark some very interesting discussion and debate without any of those excesses. It works both ways too, fans can get a different perspective and so too can the writers, if they’re all open to that.

The one thing I would say though, is that it’s important that there’s still room for the stuff that is a bit less hysterical or aimed towards that particular audience. Some of the onus is on you guys, readers and listeners and viewers, because in this day and age there’s a tendency only to share what is outrageous or OTT.

So when you read something by a blog or a journalist that you enjoy, think about sharing it. When you hear a podcast that provides you with enjoyable content every episode, rate it, review it, share it, subscribe to it, tell your friends about it. When you see a video that has taken work, time and effort to produce, well … you know what to do.

Anyway, stream of consciousness stuff this morning a bit, but there’s no escaping there’s a new dynamic and we’d better all learn to deal with it, one way or the other.

Right, we’ll have news ahead of the Bayern game from the manager’s press conference on Arseblog News later on. And if you haven’t had a chance to listen yet, yesterday’s Arsecast Extra discussing Hull, Mesut Ozil, Theo Walcott, feeding curry to ducks, and lots more, is below. Happy listening.