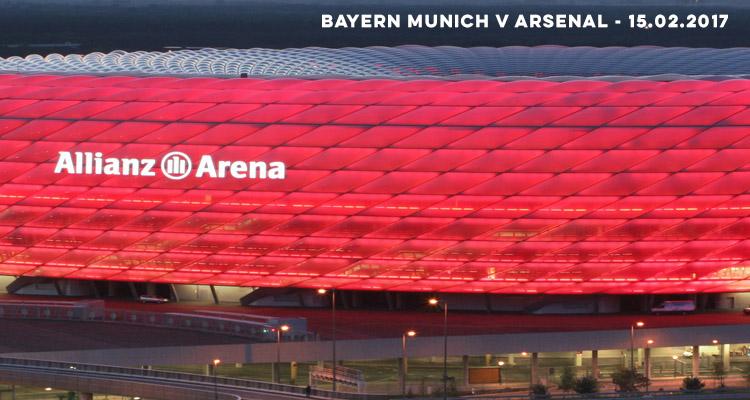 Can we go back in time and let in another goal against Paris Saint-Germain in the group stage so we can play that Barcelona lot? They’re rubbish.

A big win for PSG last night shows that cup football can throw up surprises, because as good as the French champions are, nobody expected them to do that last night. Barcelona are now realising that having a defence is actually a pretty handy thing for a football team. We just have to wait and see if Arsenal can get on board this train when we face Bayern Munich tonight.

The Germans are definitely favourites, and the last time we played there we got hammered 5-1. It’s still fairly fresh in the memory so perhaps it obscures the two previous results at the Allianz Arena, a 1-1 draw and a 2-0 win which saw Bayern qualify by the skin of their goal difference teeth. Our record there really isn’t that bad, so there’s some confidence to be taken from that.

Of course much will depend on the team Arsene Wenger selects tonight, and there was no shock at all when he confirmed David Ospina would play in goal:

The manufactured hysteria about this so-called selection dilemma has been funny to watch. Everyone knows that Ospina is the European keeper, it’s been that way since the start of the season, and it wasn’t even a question worth asking in the build-up to this one beyond finding a way to make headlines.

Now, I’d be happier with Cech in goal, but that’s just my personal preference. To be perfectly honest, I’d be even happier with a situation where we have one goalkeeper so good that you don’t even have to consider the concept of a ‘European keeper’, but we are where we are with the two we have, and the Colombian was always going to get the nod tonight.

I think the back four picks itself and I’d expect Nacho Monreal to come in for Kieran Gibbs, especially if we do something a bit different in midfield. The manager says that Mesut Ozil is ready and focused, and I really can’t see a situation where the German doesn’t play – especially in a big game like this in his home country. Leaving him out would be huge, but there is a lot of pressure on Ozil to start performing again.

I do wonder if we might play him in a role wider on the left to accommodate a trio in midfield. I would like to see Granit Xhaka come back in alongside Mohamed Elneny, whose energy and disciplined use of the ball would seem to complement him well. Alex Oxlade-Chamberlain has done well centrally in recent weeks, and it’s worth remembering one of his stand-out performances for the club came against Bayern a few years ago in that position (more or less).

Our attacking options have been slightly restricted with the absence of Lucas Perez with a slight hamstring problem, so I’d like to see Alexis up front, Ozil left and perhaps Danny Welbeck starting from the right hand side. The other option is to keep Ozil where he usually plays, push The Ox to the right and start Welbeck from the left. I think Theo Walcott and Olivier Giroud ought to be kept on the bench should we need them later in the game.

The boss knows how important tonight is for our chances of qualification:

We need to forget the past meetings with Bayern and focus on tomorrow. We have experience of playing them every year, and they always have the same goal of winning the competition. I think we are capable, we have the home advantage in the second leg, but that means nothing if we don’t play well tomorrow.

As I said yesterday, we’re not a team that can sit off, defend like demons and perhaps nick an away goal while keeping a clean sheet. It’s just not how we play. It doesn’t mean we should be incapable of defending well, lapses in concentration tonight are likely to be punished, but nor can we be as wasteful as we were against Hull on Saturday. I don’t know that we’re going to create quite as many clear cut chances which means we have to be a bit more efficient with the ones we do get.

As for what kind of Arsenal we’re going to see tonight, I wish I had the first idea. We did steady the ship a little with the win last Saturday, but it’s been some time since we’ve been anything close to our best, and we’ll need to be in that kind of territory to get a result tonight. It’s probably not a tie we can win in the first leg, but it’s certainly one we can lose, so hopefully we can find the right balance.

It’s a game that could rejuvenate us to an extent, restore some belief and some pride, and keep things going until the second leg next month. The players need to really dig in tonight, and maybe we can pull off something unexpected. Let’s see what happens.

As ever we’ll have full live blog coverage of the game for you. If you’re stuck in work and can’t see it, or simply want to follow the game as you watch and chat with other Arsenal fans, we’ll be here to keep you up to date. Check out the post later on with all the details, or bookmark our default live blog page and updates will begin automatically – starting with team news about an hour before kick-off.

Right, that’s your lot, catch you later on for the game.