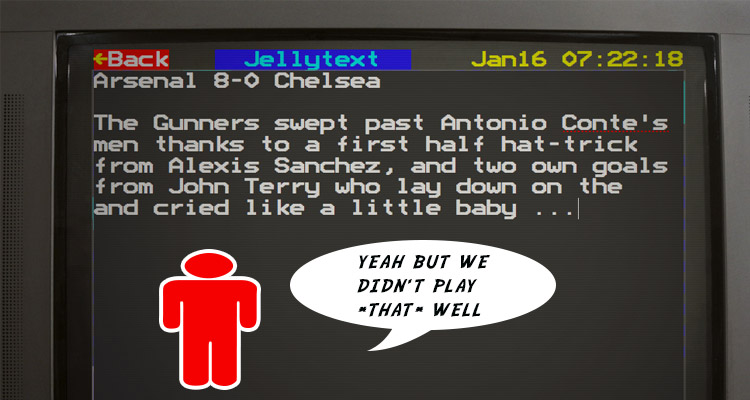 After yesterday’s games we’re back down to 4th, but it would be fair to say that the results were relatively kind for us. A draw between Man United and Liverpool meant we’ve closed the gap on the Mugsmashers and extended our lead over Mourinho. Sadly that game did not come with a plethora of red cards and ultra-violence, but hey, such is life.

Earlier, Man City got vigorously humped by Everton at Goodison Park. I don’t quite know if this is evidence that Everton are good or that Man City are bad, but having played them both recently, I think the truth lies somewhere in the middle. It’d also make you rue our recent results against them if you were inclined to live in the past.

I think it does expose Man City as pretty poor though. Like some kind of lottery winning chav who goes out and spends enormous amounts of money on the most dreadful tat, their squad is – bar a few exceptions – full to brim of really average players. I know some people are taking enormous pleasure at Pep Guardiola’s struggles, and there’s no doubt this is the most competitive league he’s managed in, but I think lots of managers would have difficulties with that squad.

Also, does Sergio Aguero deserve better? I ask only because every time I mention Alexis Sanchez on Twitter, there are Arsenal fans who tell me that he deserves better than us. By that rationale – one I fundamentally disagree with by the way – Aguero is being let down by Man City and should think of himself and trophies and seek a move away to a club that is better placed to give him that.

Maybe we could provide him that lifeline, a shock January move made just in time for him to play up front against Chelsea during which he’ll jump two footed into David Luiz who is lying on the ground and just to make sure he’ll do it again, right into his head, crushing his woolly skull, and it’ll be ok because he deserved better than playing for a team who have struggled without their star striker who was missing for 4 games because of his second red card of the season for nasty violent conduct.

Anyway, it’s all very tight at the top, as you can see:

And as I mentioned yesterday the only thing we’re in control of is what we do, and winning at Swansea was our job for the weekend and it was job done.

It was interesting to see some of the reaction though. I know we should never be surprised by things people say on the Internet anymore, but there was a lot of ‘It was just Swansea’ [a team that have beat us 3 times out of 4 in the previous two seasons], or complaints that the performance itself wasn’t good enough and we had to rely on a couple of lucky goals.

Personally, while aware of the fact it wasn’t our most accomplished display of the season, I find there very little to be unhappy about when we win 4-0 away from home, and I’m sure I’ve mentioned this before but it seems as if there’s a demand for absolute perfection 100% of the time, and anything less than that is deemed unacceptable.

It wasn’t the most convincing performance of all time but, when it comes right down to it, so what? Yes, we benefited from a couple of own goals, but again, so what? I wonder if some people – when they think back to our best teams – have this idea that every game we played was a masterclass of dazzling, swashbuckling football, like fleet-footed artists creating a beautiful canvas before our eyes. Some games, yes, but certainly not all, and own goals, some luck and good results when we didn’t play near our best were far more common.

A 1-1 draw with Portsmouth at home; a 1-1 draw with Charlton away; a soft-centred Arsenal side allowing Craig Hignett to equalise in the 90th minute away at Leicester; a 0-0 draw with Fulham at home; conceding a late equaliser to Henrik Pedersen allowing Fat Sam’s Bolton to take a point of us; taking an early two goals lead against Charlton at home then letting one and having to play out the last half an hour with a precarious one goal advantage – just some of the games in which the 2003-4 Invincibles didn’t do themselves justice.

It happens to the best teams, and while I’m not comparing this current iteration to them per se, I find it perplexing that there’s room for such criticism after a 4-0 win on the road. Of course we can analyse and look at the bigger picture and all the rest, but there appears to be an ever-increasing gap between the reality of top level sport and people’s expectations. Our best teams, our title winning and double-winning teams, won games without playing great. They had games when they struggled to score, and maybe had some good fortune with an own goal. It’s just part and parcel of football.

Anyway, we now have two games coming up that, on paper at least, are very winnable, before we go to Stamford Bridge. Let’s focus on them, hopefully take maximum points, and see what shape we’re in going into a fixture that will – more than likely – determine whether we can maintain a title challenge or not. Fun times!

James and I will be here with an Arsecast Extra for you this morning. If you have questions, please send them to us on Twitter @gunnerblog and @arseblog and we’ll have that ready for your ears before lunchtime.