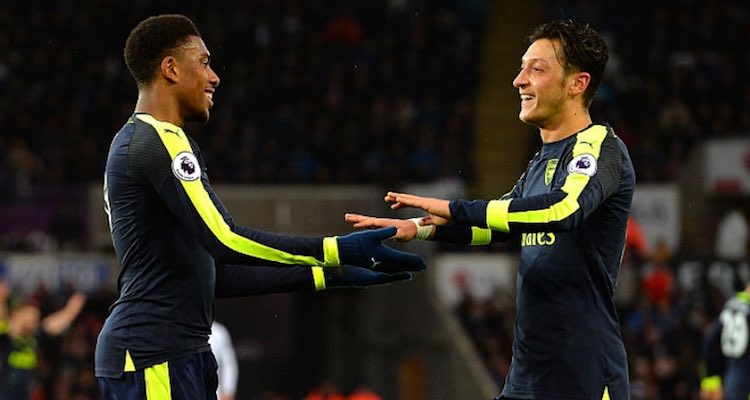 Sunday is a great day of the week when you play on a Saturday and win. And by you I mean Arsenal. These chaps have such an effect on how we view our weekends, and it’s nice to get up and just be rather content with things.

Ok, it wasn’t the best performance you’ll ever see, but there’s very little arguing with a 4-0 win away from home, especially against a team that have proved troublesome to us in recent seasons. They did start well, to be fair, Naughton forced Cech into a good save early on, but they were mostly toothless throughout.

We didn’t really get going until late in the half, another game where we took our time to start playing, but Alexis fizzed a shot at Fabianski, and then a lovely move saw Ramsey square it across goal for Giroud who just failed to make contact. Before people could sharpen their knives, Alexis crossed it back in, Ozil headed it off the legs of a defender, the the Frenchman was there to knock home his 5th goal in 5 games.

While I still harbour doubts as to whether or not he should be starting games, there’s no doubting his record:

Giroud has now scored in nine consecutive starts for Arsenal in all comps (11 goals), a streak that goes back to last May.

He seemed to injure himself in the process of scoring or maybe in the build-up, and did the old ‘substitute me’ hand gesture, but then decided he was ok, until he came off in the second half to have a massive ice-pack applied to his ankle. In hindsight, he probably should have come straight off, but the desire to play no matter what isn’t just restricted to men from Chile.

At that point we were 2-0 up thanks to Alex Iwobi. The 20 year-old’s shot hit Jack Cork and looped up and over Lukasz Fabianski. In the end it went down as an own goal, but I think he probably deserves the credit for that one. And it helped climax a period of intense Arsenal pressure, Swansea were hanging on by their fingernails really, and it doesn’t really matter how they go in once they do.

The third was undoubtedly an own goal, again Iwobi was the driving force, getting into the box, showing some nifty footwork before putting a low cross which former Sp*rs player Naughton deflected into his own net.

The effervescent Iwobi was involved in the 4th too, dribbling well before finding Oxlade-Chamberlain with a lovely pass. His low cross came to Ramsey who was bundled over, and when the ball rebounded off a Swansea player into the path of Alexis he smartly volleyed it home to make it 4-0.

That prompted Arsene Wenger to make a couple of changes, bringing off Ozil and Alexis for Danny Welbeck and Lucas Perez. To say the Chilean didn’t like the decision is understating it. He puffed out his cheeks when his number came up, and when he eventually trudged off the pitch he went and sat with the medical staff.

One of them covered him with a coat which he pulled over his head, to add to the teenage angst of it all. And look, it was a bit over the top, but this is a guy who lives for football, and can’t countenance anything other than playing the full 90 minutes. Plus injury time. Plus a bit more please, ref.

In the cold light of day he’ll know it was 100% the right decision from the manager who, if he’d left him on to get a kick or pick up a knock, would be eviscerated by criticism – especially given the injury sustained by Giroud. The game was won, Arsenal have bigger fish to fry this season, and Alexis is key to hooking and gutting and descaling and then frying those fish. He knows that. It was pure heat of the moment stuff, and nothing more.

I guess you could take a more cynical view of it, that it’s deliberate posturing tied to his contract negotiations, but this is pretty much what he’s done every time he’s ever been taken off. He hates it like I hate Phil Collins, and sometimes it’s just not possible to keep that hidden. If people love his passion and desire to do well, then this is basically tied in with that as part of his make up.

Afterwards, the manager played down the idea that his reactions were an issue, saying:

That is really, really minor. I didn’t even look. All players are frustrated when they come off – some show it, some don’t. I just made the decision I feel is right. He’s a good guy, he wants to do well for the team. There is no problem.

Some south Americans are different to Europeans. You have to respect that.

Not sure what the fuss about Alexis getting substituted is all about. Seemed pretty happy when I saw him after the game. #agenda

A quick word for the referee who made a brilliant decision late in the first half when Ki took a tumble over the outstretched leg of Laurent Koscielny. In real-time it looked like a penalty, my heart was in my mouth, but replays showed he got it absolutely spot on.

However, it took a slow-motion, reverse angle replay to show that the Swansea midfielder had taken a dive, so all credit to Mike Jones who had one view of it at top speed from a much less obvious vantage point. Referees get plenty of stick when they get things wrong, so some props are required when they get it as right as that. I have no idea how he did it, but was absolutely right.

So, the win takes us up into third for the moment, today’s fixtures might change that. Leicester could take nothing from Chelsea last night, reaffirming that their title win last season was the biggest fluke that football has ever seen, so the gap to the leaders remains 8 points. Still, all we can do is win our games and see what happens, and we did our bit yesterday fairly convincingly.

Right, have yourselves a pleasant Sunday. Let’s hope today’s games go our way as much as they can, and I’ll be back tomorrow and James and I will dish up an Arsecast Extra and all the rest.