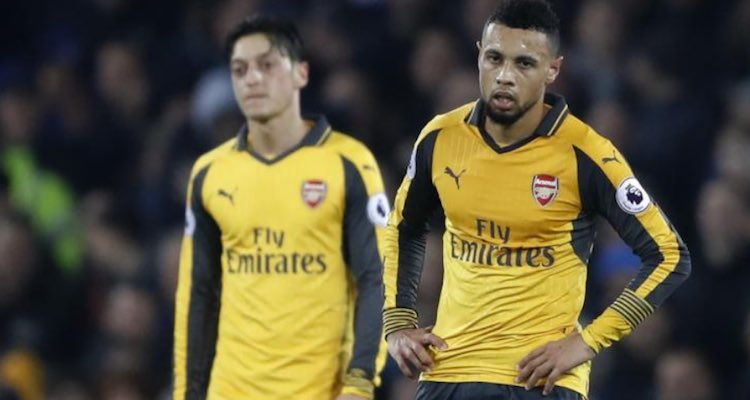 So, having been unbeaten in the Premier League since losing on the opening day to Liverpool, our run came to an end at the hands of another Merseyside team at Goodison Park last night.

It always felt like a game which had a sucker punch in it; it was just down to who would deliver it, and sadly for us it was Everton. If there was little to be upset about beyond the paucity of our own defending for the first Everton goal, I think we can be slightly aggrieved at the second.

In the build-up Koscielny seems to be elbowed by Lukaku, he’s then penalised for a foul on Barkley in which he seems to win the ball, and Everton are then awarded a corner after the ball went out off their own player. That said, there’s no excuse for the way we defended the subsequent corner, with Mesut Ozil flat-footed to say the least, allowing Ashley Williams to head home for the winner.

It had started quite well with plenty of Arsenal possession, and we looked pretty comfortable. There was a touch of good fortune about the opening goal, an Alexis free kick which deflected off Williams and beyond the despairing dive of the keeper, but as the half went on things changed. I don’t know if it was entirely down to Everton upping the intensity or us slacking off, perhaps a little of both, but the momentum changed.

A minute before half-time Walcott didn’t get close enough to Baines whose right-footed cross was nodded in at the near post by Seamus Coleman. Having made the run inside from the right-back position his appearance in the box was probably confusing with nobody really sure who should mark him, but to give him a free header like that so soon before the break was very poor.

I thought we had the best of the opening part of the second period too, and when Coquelin sent Alexis free in behind, Ozil should have done a lot better with the cut back. He had plenty of the goal to aim for, but sent his shot high over the bar. It summed up the German’s night really, and it’s hard not to look at that miss as a pivotal moment in the game.

Once again Everton came more into the game as the half went on. Barkley shot wide, although I thought Koscielny and Gabriel dealt pretty well with their fairly relentless long ball stuff for the most part. We introduced Giroud and Iwobi to try and spark us back into life, but it didn’t really work – I wonder if Lucas Perez might have been a better fit for the kind of game we were seeing.

Cech made a good save from Jagielka as they put the pressure on, Iwobi bounced a shot wide, and then a long ball from the back saw the foul from Lukaku on Koscielny and the sequence of events that led to their second goal.

We pressed for the equaliser and right at the death Iwobi saw a shot brilliantly cleared off the line by Baines, and it looked to me as if Alexis was fouled but Mark Clattenburg was having none of it. From the reverse angle it looks as if Alexis gets the ball first, Mirallas fouls him, I don’t know why it wasn’t a penalty but I’m quite sure given the way we’ve been conceding them this season if it had been at the other end it would have been.

And as as I said on Twitter last night, saying we should have had a penalty is not making excuses for how poor we were on the night, but when games are decided on such tight margins, it’s difficult not to feel a bit hard done by there. There are going to be days when you don’t play well and you have to grind something out of a game. We’ve done that a few times this season in fairness, but last night our defensive lapses cost us, and our luck ran out.

Afterwards, Arsene Wenger was critical of Clattenburg, particularly for the corner decision, but said ultimately it was something his team have to take stock of:

I think we have to look at ourselves. We lost the game because I feel we started well and after that maybe we lost a bit of urgency because we were a bit too comfortable and then Everton made it very physical. Overall, I believe that from then on it disturbed our game and we created less flow going forward.

In the end, we unfortunately didn’t take our chances or two. We didn’t create too many but we had clear-cut chances in the game that we didn’t take. After that you can be caught away from home on a corner like that.

He also pointed out that it’s the first time we’ve lost away from home in the league since that infamous trip to Old Trafford last February. It’s also the first defeat in the league since August 14th, and while it’s disappointing to lose – especially when we really didn’t do ourselves justice, that’s worth bearing in mind.

As ever when we have a bad result the people who have nothing to say when things are going well are first out of the blocks to start the complaining. There’s always more to say about a defeat, there’s more to talk about, that’s natural, but it gives rise to people who believe the only viable method of football discourse is abuse and name-calling. There was a ton of it on the Arseblog News articles last night, so for the record: criticism and negative points of view are vital, welcome in fact, because it fuels the discussion, but if all you can offer is poorly-spelled invective then do us all a favour and find something else to do with your time. It’s just so tiresome.

I saw some post-match pieces suggesting that this is the defeat which would derail our season, our first loss in four months! Then there are the so-called Arsenal fans who decided directing abuse at Alex Iwobi on his social media channels was a productive use of their time. If that’s where your head is at, castigating a 20 year old who is doing his best, then it’d make you despair that you have a football team in common with these people.

Of course it’s painful to lose a game, and the lack of performance was a worry. The big players didn’t really do it last night, and the supporting cast weren’t much better. There aren’t really any positives to take from the way we played, but a little perspective is needed on the basis of what we’ve seen this season.

For me, we were always going to lose a game at some point: the big test of this team will be how we react to it. How quickly can we regroup and get going on. That’s where we’ll get the real measure of the quality and maturity that have been lauded since that opening day, and that’s how we can make a judgement as to whether or not we’re going to be title contenders or not.

Facing Manchester City away is going to be a massive challenge now, but nobody said winning the league should be easy. Defeat stings, now let’s see how we deal with it.