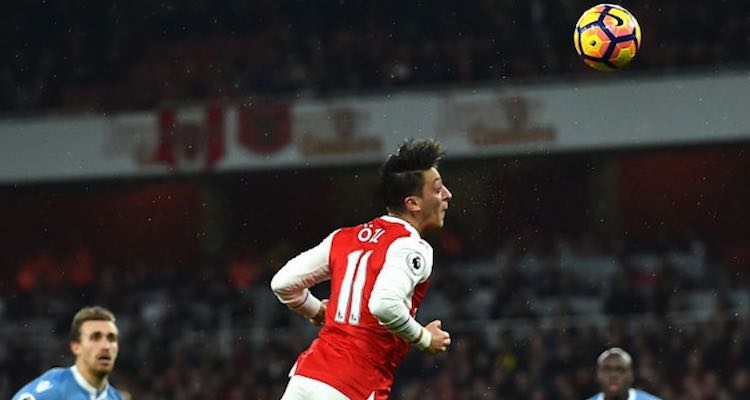 Good morning from the top of the league. We might not be there for long as Chelsea play later today, but that we’re there right now is something to be enjoyed. Especially as it comes after a win over Stoke and, in particular, Charlie Adam.

I’m sure those close to him would say he’s a nice fella, kind and good-hearted. Well, I’m not sure about that at all, but what I can say with a measure of certainty is that he is one of the nastiest and stupidest players I’ve ever seen in my life. Remember last season when he was allowed try and pull Alexis Sanchez’s head off without getting a red card? Referees enable him and his ogrish ways.

Yesterday he wasn’t quite as blatant, but he showed just how thick he is in the build-up to our third goal. When Alexis had been fouled and referee Lee Mason for once displayed an ounce of competence and waved play on, Adam couldn’t resist the temptation for a snide foul. He could have just not, but no, like a scorpion getting a lift across a river on the back of a frog he could do nothing about his true nature – and in doing so he, metaphorically speaking of course, doomed both himself and the frog (Stoke) to death.

In taking the time to stamp on the back of Alexis’s leg, he crucially slowed himself down just a step which allowed Alex Iwobi to zip ahead of him and curl home the killer third goal – watch it here. Remember, this came just a couple of minutes after Stoke had had a decent chance from a corner when Petr Cech saved a Peter Crouch header. The game was not done and dusted.

Iwobi’s goal sealed the deal, and had Charlie Adam decided to, you know, play football first rather than inflict violence on a man lying helpless on the ground, he might have prevented it. So, while I despise Adam and his gurrier-like outlook on the game, it gives me great cheer when that comes back to haunt him as it did yesterday. What a complete gobshite he is. And if there’s any justice the FA will take a look at that stamp and punish him retrospectively, but I won’t hold my breath on that.

While Adam played his part in our victory, we had to work hard to come from a goal down, a penalty scored by the man who looks like he lives under a bridge and communicates through a series of low growls and hand gestures. The referee deemed Granit Xhaka’s challenge on Joe Allen worthy of a penalty. I’ve watched it lots of times and I think it was completely accidental. When you see one of the angles in particular it looks a bit dodgy, but I don’t want to say anything that might make it look like I think Lee Mason is anything other than really bad at refereeing.

It meant we had to dig deep again, and after Mustafi had gone off with a hamstring injury, Hector Bellerin came on and gave us something different down the right hand side. He was rusty after a few weeks off, but still made chances, including the one for the equaliser. After we’d worked the ball out to him, his low cross was very tastily turned in by Theo Walcott for his 10th goal of the season. A very special moment for him, because he wins a coffee machine from his wife. No, seriously.

The goal was timely and we might have gone ahead before the break but Oxlade-Chamberlain couldn’t keep another excellent Bellerin delivery down. The Ox provided the second though, lofting a ball over the top of the Stoke defence, and making the run to loop a beautiful header over the keeper was Mesut Ozil. A really nice finish from the German, and his desire to get into that position was matched by the quality of the delivery.

Stoke brought Crouch on to do his tall stuff, and as mentioned his first touch drew a save from Cech, before Iwobi’s movement and pace brought about the third goal. A mention for the finish too, if you look back at the game against Sp*rs a few weeks back, that’s what he should have done with that chance from a similar kind of position. It was confident and assured, and perhaps it’s something he’s taken a lesson from.

After that goal, Stoke knew the game was up, they barely tried at that point, and once again we were able to control the final stages of a game well and take all three points. Afterwards, Arsene Wenger said:

We had a hesitant start, but when you play every few days sometimes it takes you time to get into a rhythm and today that is what happened. We have scored many goals this week and had an excellent run, so let’s keep the focus and keep it going.

Interesting, that’s the sixth time this season we’ve come from behind to win a game, something the manager touched on post-game too:

It makes you think that six times is not a coincidence. As well it makes you think in the future when you go 1-0 down, this game is far from lost because you know your players have the strength to fight and come back. Overall I believe that’s very positive for us.

I suppose the first thing to say is that it would be better not going behind in the first place, but there’s definitely something to be said for a team that can deal with that situation. Especially when referees this season appear to be quite keen on awarding dubious penalties against us, that’s five already this season which is more than the last two seasons put together.

It does feel as if this team has the kind of unity that you need to do that, and yesterday was another controlled performance against difficult opposition. I thought the Coquelin/Xhaka partnership in midfield was particularly effective, and once more we saw the supporting cast step up when our main striker didn’t score. Ozil and Walcott are scoring regularly and the effect it has on results in obvious. Iwobi’s goal, worked from a wide area, shows there’s strength in depth.

All in all, a good day for us. We now have to dust ourselves off and get ready for a difficult away trip to Goodison Park on Tuesday. I’m not sure Everton getting spanked by Watford will do us any favours as they’ll be keen to respond in front of their own fans, but if we keep going the way we have been, we can be pretty confident about getting a result there.

For now, enjoy being top of the table, even if it is just temporary because there’s simply no way that West Brom can get anything against Chelsea today. No way at all.

Have a great Sunday folks.