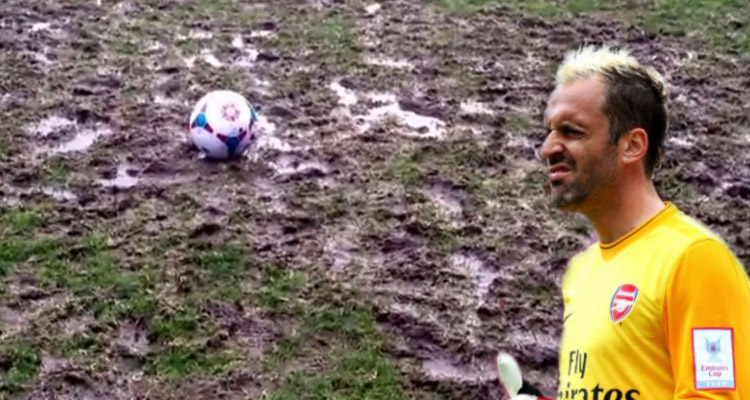 I had one of those mornings where my alarm made no sense to me. I couldn’t work out what it was, or what the noise was trying to tell me. It incorporated itself into my dream and I hit snooze like a bastard until eventually I figured out what was going on. When I came to this understanding, I was deeply unhappy, as I felt as if I wanted to stay in bed all day.

Having got up, hugged the dog, made coffee, and come upstairs to my office, I still feel like that. I guess an Interlull can do that to a man. Or lack of sleep. Anyway, here we are.

I did have a dream about Saturday’s game though. Not a good one either. No optimistic portents, although I don’t think you can have a good portent, can you? By their very nature portents are negative things. A harbinger. No, that’s the same. Omen? That’s pretty evil. Omen II. Same. Foreboding? Man, we have a lot of words in the English language about how dismal the future is going to be.

Anyway, here’s what happened. Manuel Almunia was in goal and he went to kick the ball out of his hands. As he did so, he slipped and crumpled into a really broken up version of himself, a bit like when Darth Vader chops down Obi Wan Kenobi in Star Wars, except he was there, it wasn’t just his goalkeeping outfit on the ground like a cloak. The ball then bobbled across the area, just outside the six yard box.

At this point I should point out that in order to put Arsenal off their passing game, United, under orders from Mourinho, had doctored the pitch so it was all bockety and full of holes. Sort of like No Man’s Land in World War 1, craters filled with rainwater and muddy peaks like a footballing Himalayas. However, Hector Bellerin had the chance to clear the ball straight away, instead he decided he’d dribble it out of the area. With United players rushing in, he decided to boot it upfield, but he mis-kicked it off Juan Mata and the ball trickled across the line under the pulsating remains of Almunia.

Shkodran Mustafi went bananas, and slapped Hector in the face repeatedly until he started to cry. I don’t know what happened after that because I was so furious at conceding a stupid goal like that against United. Which, if you’re into dream analysis, will tell you two things. 1 – My head is a very strange place and 2 – I’m really quite worried about this game.

There’s our record against United at Old Trafford, to start with. Our last Premier League win there was on September 17th 2006, when a lovely ball from Fabregas set up Adebayor who was not offside, and he rolled the ball beyond Tomasz Kuszczak to give us the three points. There’s the fact it’s an early kick off, away from home. There’s Alexis, one of our most important players this season, coming back from Chile with a hamstring that may be held together by some double-sided sticky-tape. And, of course, there’s Arsene Wenger’s record against Jose Mourinho.

On the one hand science’s most imperturbable law – the Law of Averages – tells us that he has to get a win in the league over him at some point. On the other though, Mourinho is such a malevolent force for evil that he, after all his troubles this season, boo-hooing about how he has to live in a luxury hotel suite while being paid millions every year to manage one of the biggest football clubs in the world, will find some way to get what he needs out his players on the day.

Oh, and the build-up. In some ways I’m delighted there was an Interlull because it’s meant we haven’t had the full glare of the media on this game yet. But just watch in Wenger’s press conference, someone will ask him something about his relationship with Mourinho and he’ll bat the question away by saying ‘That’s not important, what’s important is the game between two clubs’ and some Sky Sports Wankenstein will go to Mourinho’s press conference and say ‘Wenger says you’re not important’, and Mourinho, being the almighty prick that he is, won’t be able to resist some kind of dig.

I’m all for reporting stuff as and when it happens, but this desire to manufacture outrage is so tedious I barely have the words for it. Especially when it comes to Wenger and Mourinho. There are certain sections of the press who won’t be happy until the two men have it out UFC style. It almost happened at Stamford Bridge a couple of seasons ago when Mourinho cacked his pants after that Gary Cahill tackle, but I don’t think they have time to stoke the fires that much before this one.

I don’t know. Maybe I’m just steeling myself for disappointment. I think we have the players to go there and win, and I obviously hope we do, but last season’s game at Old Trafford has left a big scar. I think there are ghosts we need to lay to rest there this weekend, so fingers crossed I’m just feeling like you do when you see a loose dog running across a busy road and you think it’s going to end badly but somehow he gets to the other side.

Come on Arsenal, be the loose dog. And when you get to the other side, cock one leg, and mark your territory by slashing on a goalpost with three lovely points under your belt.

I really need to go back to bed.