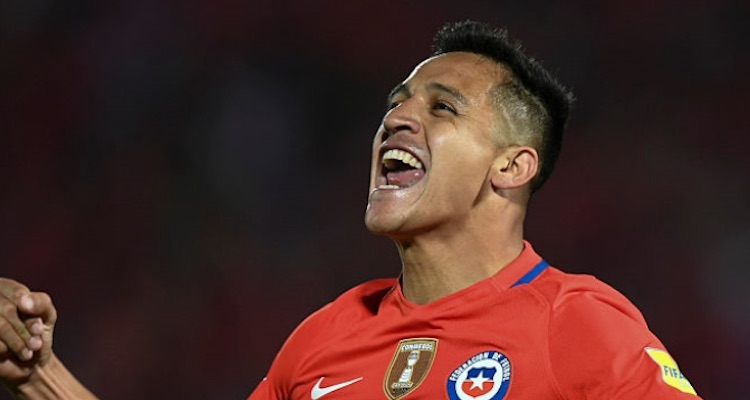 When I went to bed last night I was fully expecting to wake up to news of Alexis Sanchez and his hamstrings being taken to hospital where a doctor would have taken a look, shook his head sadly and said, “I’m sorry, there’s nothing we can do”, before taking them out the back and having them put out of their misery.

So, imagine my surprise to discover this morning that not only did he apparently come through the game unscathed (hopefully because his injury just isn’t hurting him and not because of any Chilean pre-match pain-killers), he scored twice to fire his country to a 3-1 win over Uruguay.

Love that second goal, particularly the first touch, delicious. He was then substituted in the 83rd minute but this does not appear to have been because any of the muscles in his leg exploded (thanks to Tim Stillman who stayed up late for that info). So, that’s a good thing, in the very short-term at least. He’s fit enough to play and score twice, so fingers crossed all the fear we had over this side of the Atlantic was misplaced.

However, I am going to remain somewhat cautious ahead of the weekend. First, we have to see if there’s any post-match aggravation of an injury which forced him to wear such heavy strapping, and then there’s the small matter of a 15 hour flight back from Chile to London. I know he’s not going to be sitting with his knees up against his chest in some kind of economy class, but that’s still a significant journey all the same. Given that we have a 12.30 kick-off away from home on Saturday, even with everything going like clockwork, it’ll be interesting to see if Arsene Wenger deems him ready for United.

Still, at least there’s nothing obvious to freak out about this morning, and that is a very good thing if you ask me. There don’t appear to be any reports of problems from elsewhere either. Laurent Koscielny played 45 minutes for France as they drew 0-0 with the Ivory Coast. Olivier Giroud came on after 63′ but couldn’t break the deadlock as he’s saving his goals for Old Trafford.

Theo Walcott got a half and a half as England blew a 2-0 lead over Spain to draw 2-2, while Shkodran Mustafi played the full 90 minutes of Germany’s 0-0 draw with Italy. And in vaguely related news, Joel Campbell – on loan at Sporting – scored twice for Costa Rica against the USA (watch the goals here and here).

So, I think that’s just about that, and we can wave off the Interlull until 2017. Cheerio now, don’t let the door hit you on the arse on the way out, you interrupty old bastard. Obviously those who were away will have to be assessed when they return, and while there’s not much preparation time for the trip to Old Trafford this is not an unusual scenario for Arsene Wenger and top of the table Premier League managers to deal with. He’ll have been thinking about what exactly to do throughout this break, so let’s hope his plans aren’t laid asunder by any unexpected problems.

There now lies ahead a period of relentless Arsenal, with games big and small but all very important, and it feels like a pivotal time in the season. We have a huge game on Saturday, for so many reasons and we’ll touch on that over the coming days. Next week there’s PSG at home, a fixture which can decide our Champions League group. We have to play Southampton in the EFL Cup before November is out, and in December we have Everton and Man City as we head towards that challenging, tiring, hectic festive period. The squad is going to be well and truly tested in terms of quality and depth, so it’s time to buckle up and see what we’re made of.

Elsewhere, I like the sensible outlook Alex Iwobi has when assessing his place in this Arsenal side. Having made such a significant breakthrough last season, he hasn’t quite been as effective this time around. In some cases you might worry, but he seems to have his head screwed on right, saying:

I play like it’s almost like my last game, I treat it like it’s my last moment here, so I do my best and I always put 100 per cent into whatever I do. If you don’t do as well as you think you could’ve done, there’s other players, other international, great players, that can just step in.

I have to say I had a feeling about him ahead of the North London derby, and I’m sure he’d be the first to say that he should have scored that day. His effort lacked a bit of conviction in the end, but a goal in Manchester might just be the thing to get him going again. Fingers crossed anyway.

Right, that’s just about that. You may have noticed the paint-job on the site this morning. Leaving aside of the ‘Ooooh, I hate change!’ reactions, if you notice anything not working properly etc, please let me know and I’ll do my best to get it sorted. Thanks as ever to Tom for gunthering behind the scenes to make the arses work etc.