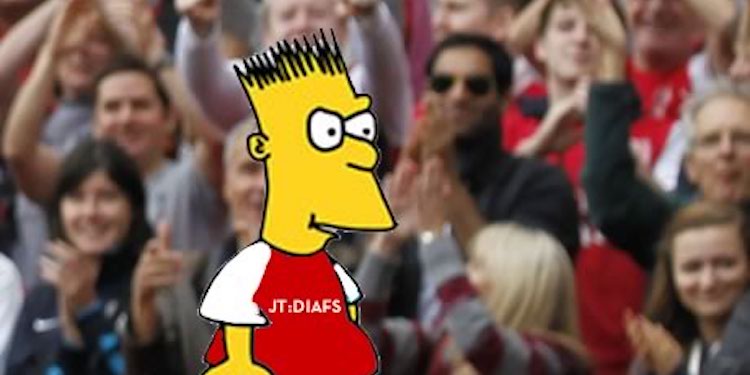 The other day I wrote about the disappearance of Adam’s Apples from men. It’s probably to do with all the oestrogen in the chemtrails that they put in the water to make us all compliant, but a man who did have a striking one back in the day was Gareth Southgate.

I’m not sure how it is now. Maybe it’s worn down a bit, but the new/temporary England manager has shown he’s not a silly man by dropping Wayne Rooney from the team for tonight’s game against Slovenia. If you were smart, that would be the first thing you’d do as England manager to get people on side.

Rooney has been playing poorly for club and country this season (and last and maybe the one before that), and his career is certainly heading into its final stages. He’s no longer a dynamic, aggressive forward, more a cumbersome pretend midfielder weighed down by years of football and girth, who now just shifts the ball slowly from right to left to left to right like that clip of ‘soccer’ in The Simpsons.

I don’t really know why I’m mentioning it, other than to say if it works it’ll leave Southgate in real danger of getting the job full time. I’m sure he’s considered that possibility and having checked his cupboard for skeletons is willing to give it a lash. In which case all you can say is good luck to him.

Apparently Laurent Koscielny was fantastic for France last night as they beat Netherlands 1-0 thanks to a goal from Paul Pogba (nice hit, keeper really should have done better). This shouldn’t really be any surprise to us though, as we’ve seen him develop from an early Bart Simpson lookalike who had some difficult moments in the first couple of seasons to one of the best central-defenders in Europe.

When you look at our team-sheet and you see Ozil, Alexis etc, you feel good, because they’re good. If they’re missing, you wonder how exactly we’re going to cope. And despite some depth at centre-half Koscielny is exactly the same. When his name is on there you just feel much more confident about our ability to get a result. Not only is he a fantastic defender, if it’s a particularly tight game he’s capable of nicking you a goal.

Sometimes we say ‘Oh, it’ll take a little bit of magic from somebody to break the deadlock here’, hoping one of our flair players can wiggle their right stick and do something special. In reality, it’s more likely that Koscielny will scrap one in from close range, he’s done it time and time again. I guess at 31 he’s now at his experienced, mature best, but part of me wishes we could turn the clock back and make him 28 again, just because.

Yesterday was a pretty quiet day in terms of Arsenal, but we had two players ‘reveal’ summer contact from the club which came to nothing. First up Riyad Mahrez who said:

There was contact with Arsenal. But Leicester wanted to keep me and I was pretty expensive. I did not want to create a conflict when the offer came in.

Which suggests there was an offer but he wasn’t willing to agitate for a move. Maybe the new contract offer helped but perhaps he’s just not the kind to cause hassles at a club where he’s just won the Premier League. With Leicester returning very much to the norm this season, you suspect he might be more willing to move on next summer – but you can be sure there’s a very definite release clause to ensure that process isn’t messy or difficult should it come to that.

Then there was Lille defender Djibril Sidibe who turned us down because he felt he wouldn’t play often enough:

I was on the brink of signing for Monaco and Arsenal gave me a headache by making a bid at the last moment. After reflecting on it, I was not certain my playing time would be guaranteed.

I would have played maybe 25 games this season, including the cups. They also wanted to use me on the left whereas I want to establish myself on the right.

Interesting, because for a while earlier this calendar year we were being linked with a plethora of left-backs, from youngsters at Leicester and Celtic, to Wolfsburg’s Swiss international Ricardo Rodriguez. It looked, perhaps, like we were future proofing, bringing in somebody to understudy Monreal for a while before transitioning to the new man, but obviously Kieran Gibbs stayed and that put paid to that.

Maybe it’s something we’ll look at in transfer windows to come, but this is a week where Gibbs and Monreal have both been called back into their respective national squads, so we’re pretty well covered as it stands.

Other than that, not much to tell you. The last of the Interlull games take place this evening, and then we can start looking forward to the weekend our game against Swansea. In the meantime, here’s yesterday’s Arsecast Extra featuring the best camel story you will hear all week, some discussion of Alexis/Ozil contracts, Robert Pires, and lots more besides. Have at it.

And if you do listen/subscribe via iTunes and you wanted to give us a rating/review, that would be very much appreciated, thank you!

Any news that breaks today we’ll have it over on Arseblog News, more here later with the Tactics Column, and I’m back tomorrow.