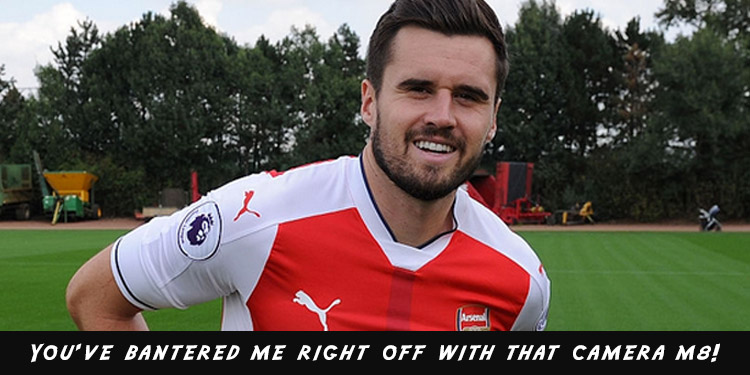 So that’s it. The internationals are done and dusted. Hurrah. Except there are more next month. Booo. But for now they’re over. Hurrah.

There were people expressing concern that Mesut Ozil came off at half-time during Germany’s 2-0 win over Northern Ireland, but the Arsenal man ‘took to Twitter’ to say that everything, in proper East 17 style, was all right.

Thanks for taking care because of my substitution but everything is all right guys ?? #GERNIR #DieMannschaft

I do wonder who that Mannschaft person is and what he did to annoy the usually mild mannered Mesut, but let’s not worry about that now. Meanwhile, Theo Walcott played 62′ for England as they had Joe Hart to thank for a 0-0 draw against Slovenia. He was then replaced by Andros Townsend which must be what it feels like if your other half comes home and tells you they’re leaving you to go marry a tree. Let’s hope he can keep his club form up when we face Swansea at the weekend.

From South America, Alexis played the full 90 as Chile beat Peru (it took me far longer than it should have to find that info this morning), while David Ospina became Colombia’s joint most-capped goalkeeper as he .

Update: Turns out he actually let in two goals as Colombia drew 2-2 with Uruguay. Thanks to @Arsemickey for the heads-up.

So, as far as I can gather there are no injury problems to worry about, but obviously we’ll have to take into account some travel fatigue. Not to mention that we now have 5 games in 14 days across three different competitions, so it’s going to be important that the manager uses the full depth of his squad to keep things fresh. The challenge there, of course, is that we’ve been playing well and it’s difficult to change things too much when that’s happening.

However, with November a traditionally difficult month for us – and this upcoming one has games against Sp*rs at home, Man Utd at Old Trafford, and PSG at home – the fixtures for the rest of this month provide us with a real chance to gather some momentum. That’s taking nothing for granted, of course, we go back to the ‘humility’ Arsene Wenger spoke about a couple of weeks ago, but on paper they’re games you would say are winnable.

Elsewhere, Carl Jenkinson has been talking about his season and a half on loan at West Ham. His second spell was cut short by an injury that he’s just about recovered from now, but he says the whole experience was beneficial to him, telling the official site:

I’ve definitely grown up a lot in the last couple of years. I like to think I’ve always been quite a mature lad but just learning how to deal in everyday life with certain situations, I think I’ve matured a lot. I think on the pitch I’m better at making decisions and it comes with experience.

I’ve played a lot of football over the last couple of years for someone my age. I’ve played 50 odd games in the Premier League, which was fantastic for me. That experience is invaluable.

I’m not sure exactly how close he is to making a first team return yet, but you’d have to say there’s an opportunity for him to stake his claim as first-choice back-up to Hector Bellerin. Nobody has seen Mathieu Debuchy for ages – some say he wanders the streets wrapped in sackcloth and chains bemoaning his life, his crippled, twisted limbs making children turn away in horror – but perhaps it’s less sinister than that.

The Frenchman is now 31, not ancient by any means, but he’s also not playing regular football, and he’s at an age where that will vex him. Even if there are no European Championships to aim for, chances are he’ll be looking to get away in January (fitness, chains etc permitting). Sometimes a transfer that looks like it should be the perfect fit for club and player just doesn’t work out, and his has definitely been one of those.

As I pointed out the other day though, Hector has played a lot. The only one of Arsenal’s 10 games this season he didn’t start was the EFL Cup and he’s played the full 90 in every one. He’s also been away with Spain’s U21s and played almost two full matches there (he came off very late in one after he got a kick on the ankle). There has to come a time when we give him a rest, we’ve seen before how playing young players too much at an early age can have an impact.

Of course it’s not something that will definitely happen, but it’s something to consider. If Jenkinson is fit enough to play the EFL Cup game, and does well enough, he could provide that back-up. His first season at West Ham went pretty well, he played consistently throughout. The second wasn’t so great, so there are still some question marks over him at this level, but with Kieran Gibbs providing solid cover for Nacho Monreal on the other side, it would be good if we had similar for the right. Let’s see how it goes.

Finally for today, Alex Iwobi’s story of his Arsenal song initiation is excruciating! Unless you’re blessed with an angelic voice like Shane MacGowan, it must be so hard to get up and sing in front of a room full of people. I know I would rather the earth opened up beneath me than have to do that. Still, I suppose it’s a small price to pay when the upside is you get to play for the Arsenal.

Right, that’s your lot for this morning. More from me tomorrow, have a good one.