It’s perhaps a little early in the season for Arsene Wenger to revert to safe mode, but his selection against Hull City on Saturday suggests a bit of that. It’s not just that Granit Xhaka remained on the bench but the fact that the line-up has barely changed for the three games played this week.

For Wenger, one of the themes of the last few seasons is consistency in selection, and once he stumbles on a formula, he rarely deviates from it. Xhaka might have had a case to start following his good performance in the 3-1 win over Watford, but even that selection was somewhat enforced by injury to others. Instead, he has had to wait as Wenger places trust on already established partnerships and “pairs,” as he called it, especially in the case of Santi Cazorla and Francis Coquelin.

Still, there is scope for good form, happenstance or just plain bad luck to influence Wenger’s choices and it was the performance of Alex Iwobi in the 4-1 victory over Hull that proved particularly the former. The left-winger delivered two assists and was generally the instigator of dangerous attacking plays, whether driving at Hull’s defence or finding pockets of space between-the-lines. In some ways he typified Arsenal’s approach to the game as they always seemed to find gaps between Hull’s lines, but it was the display of Theo Walcott which perhaps summed up their dominance.

The pair combined to score Arsenal’s second goal, a sumptuous move that started from the back and ended when Iwobi back-heeled for Walcott to dink home. And the two were heavily involved in opening the scoring when Walcott’s cross was parried by the goalkeeper to Iwobi’s path and his shot deflected off Alexis and into the goal. But there was a layer of craft to Walcott’s game that we haven’t witnessed since the days he formed part of a foursome with Nasri, Fabregas and Van Persie.

Against Hull City, he constantly stepped inside, between the left-back and centre-back, before spinning into the box or wide to the flank. Normally, Theo Walcott is the outlet but here, he was as much part of the process as the result. Wenger alluded to this when he said that in the first half, Walcott was “influential on the ball. He scored one as well, so he’s efficient and that’s what you want.” Maybe the stint up front taught him how to vary his game better, to anticipate the moments to drop off and protect the ball as well as making runs beyond.

Indeed, Walcott was part of an attacking collective which seemed to play the game exclusively between Hull’s lines and the opponents just couldn’t cope. The issue Hull had was whether they should get tight to Arsenal’s receivers when the ball was played through. This was particularly a problem when Alexis dropped off because the natural tendency of centre-backs is to step back 5-10 yards when the ball is played in this area to stop the run behind, but Alexis was always moving away from the goal.

If they dropped off then obviously the gap between midfield and defence would become larger. The onus therefore was on the midfield to get tight and press when the ball was played to the feet of the forward players. Except, Hull did neither, defending in a block of 30m from the edge of the own box to the halfway line which at no point put pressure on Arsenal’s passers. 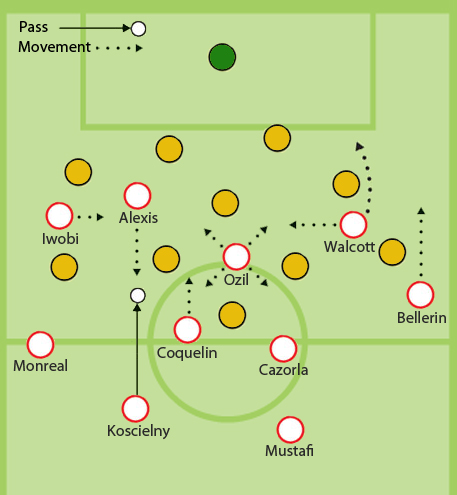 The second goal was the best example of that as you can see when Cazorla plays the ball between the lines, the three behind Alexis are all in a line waiting to receive the ball, whilst Alexis is teetering between the thought whether to come towards the ball, or spring behind. Even the build-up to the first goal features a number of players occupying the spaces behind the Hull midfield and the move starts when Shkrodan Mustafi zips a pass through them to Ozil.

Sums up Arsenal's approach. Wingers coming inside, playing between the lines, Hull not knowing whether to get tight https://t.co/ILhtNCZrVR

Cazorla had an easier game finding space than against PSG or Southampton because whenever he came to the ball, nobody followed him. Indeed, it was a more conventional shape we saw from Arsenal when progressing the ball from back to front than in the previous two games, with Coquelin more selective in his runs. Partly he didn’t need to produce those decoy runs because Cazorla was free anyway – while Mesut Ozil found it easy to come to the ball – but also because Alexis tended to occupy those spaces between-the-lines that Coquelin did in the aforementioned previous two games. Nevertheless, he still ended up as threat when he burst forward, being involved in both the opening goal and the penalty with runs into the box.

While it’s clear this is Arsene Wenger’s preferred line-up, it’s still unclear whether it poses the best solutions to whomever Arsenal play. In four away games, Arsenal are unbeaten with Alexis up front so perhaps it’s an answer to teams dropping deep. Or more specifically, it deters them from dropping deep because at their own ground they are expected to push up, and with Alexis sort of playing a false nine role, they’re caught between two stalls.

It’s also early days to suggest Alexis as the optimal solution up top. He’s almost the very modern take of a striker, restless, always burrowing for space, pointing, and closing down the full-back at the same time, but he has one overwhelming tendency: the pathological need to come to the ball. With Walcott in the side, and Ozil and Iwobi varying their runs, Wenger might feel he has enough tools to complement his style though it requires the build up be close to perfect.

Having Alexis drop short is one way of boosting numbers in the middle to ensure the ball is progressed smoothly from back to front, as he showed against Hull, but when teams really get tight, as highlighted against PSG, Arsenal rely on an outlet, somebody to hit quickly. Once again, that’s just part of the demands of the modern striker, something which Alexis will hopefully prove in time, of course, with his own twist. It’s just that he’s probably better on the flanks, though there are an array of options for Arsene Wenger to mix it up if he needs to – and he definitely needed to in the 1-1 against PSG.

Of course, we’ve heard something like that in regards to the choices in midfield but thus far the manager has chosen to err on the side of caution. His selection against Hull was predictable because we’ve seen him ask his senior players to give extra if he knows he has a chance to give them a weeks rest like he has on Tuesday in the League Cup.

For Xhaka, it’ll be a chance to prove his worth – the direct replacement for Cazorla judging by Wenger’s words, the midfielder in the system who is nominally the deepest player, but with the capability to step out. His goal, Arsenal’s fourth against Hull City, showed just what kind of quality he has.