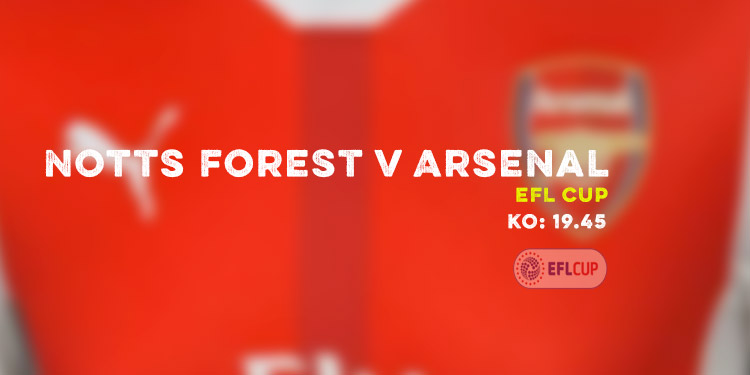 It’s EFL Cup action tonight as we face Nottingham Forest at the City Ground. There used to be a time this was a top flight fixture, but the last time the two sides met was in January 1999.

It was a Premier League encounter, Martin Keown scored the only goal of the game, Remi Garde started for the Gunners, we had Fabian Caballero on the bench, and Nigel Quashie, who really should have launched his own brand of Orange Squashie, was part of the Forest side.

Tonight is a chance for some of our ‘fringe’ players to get a run out, and it’ll be interesting to see what happens there. There’s still no Olivier Giroud, so you’d have to think that’s an opportunity for new signing Lucas Perez to start up front. The Spaniard will no doubt be hoping to get off the mark and get his first Arsenal goal.

After wondering on this week’s Arsecast Extra if Mathieu Debuchy had been brought to the footballing vets for the final time, he reappeared as if by magic, scampering around during training yesterday and a back four of the Frenchman, Rob Holding, Gabriel and Kieran Gibbs would not be a surprise.

In midfield it’ll undoubtedly be Cazorla and Coquelin. I kid, he’ll probably play Mohamed Elneny and Granit Xhaka, but quite who fills the number 10 role remains to be seen. Alex Iwobi has become an important piece of the first team puzzle, so we could see Alex Oxlade-Chamberlain in there, or perhaps even The Jeff, who will be keen to Jeff it up for the first time this season.

A sprinkle of youth in the wide positions too might make this a very interesting Arsenal team. Perhaps not as youthful as some we’ve seen in this competition in the past, but there are some players who will be very keen to knock on the manager’s door with their performance so they can be more involved in the Premier League. The midfield pairing in particular have the quality to do that, so I’m looking forward to seeing how they work together.

There’s a bit of extra interest in this one because the Forest squad contains three former Arsenal players. Henri Lansbury joined them in 2012 after a number of loan spells at the likes of Norwich and West Ham. He was one I’d always hoped would make the grade, but it never quite happened for him and he seems to have done pretty well at the City Ground.

There’s also Armand Traore, who was very fast, and, course, Nicklas Bendtner. Even after all the stuff that’s gone down, I have a soft spot for him. I think there was potentially a really good player in there, but there’s no question he lacked the application and commitment to make the most of his talent.

Speaking about him and his chequered career on the official site, Arsene Wenger said:

Sometimes it was not his fault but you felt he had it all in the locker to make a fantastic career. Yes, the perception people have of him is that he is overconfident, but I don’t think so. He was sometimes impatient when he was with us. Sometimes he was disappointed not to get the chance and you can understand that.

It is difficult – I am not here to judge people. Sometimes you manage to get it, and sometimes we do not find the key. Then you have to leave the key to someone else who has the potential to find it.

You wonder if that confidence was always genuine or if it was something of act to cover up self-doubt. His off the field behaviour was ludicrous at times, sometimes indefensible, and mostly just a bit silly, but it’s very hard to look at him and not wonder what might have been if he’d managed to keep himself more or less on the straight and narrow. He scored 47 Arsenal goals from 171 appearances (83 starts), and there really should have been a lot more.

It’s understandable that people see him as something of a joke, he certainly hasn’t helped himself at times, and he’s had chances in his career that he has more or less wasted. Whether it was his youth, his attitude, other issues regarding his mentality, or a combination of both, he definitely never achieved what he was capable of. He’s 28 now, time is running out, and I hope he can find his way back a bit. Not tonight, obviously, but over the course of this season.

Bendtner himself spoke about what might happen if he scores tonight, and said:

If I score against Arsenal I will celebrate, but I promise I won’t be causing chaos. I have a lot of love and respect for Arsenal as a club.

And look, here we are all these years later, with so much water under the bridge, so many things have happened, and he’s still having a little pop at Emmanuel Adebayor there with his celebration comment. Fair play to him, can’t argue with that.

I don’t know if we’ll have live blog coverage of the game tonight, it’s all dependent on finding a good stream and given this isn’t on TV it might be a bit of a struggle. Keep an eye on the default live blog page though, and I’ll update on Twitter if we’re able to do it.

For some extra reading this morning, the Tactics Column this week looks at Iwobi and Walcott v Hull. Finally for today, check out this week’s Arsecast Extra looking back over a fun weekend, a 4-1 win over Hull and lots more.