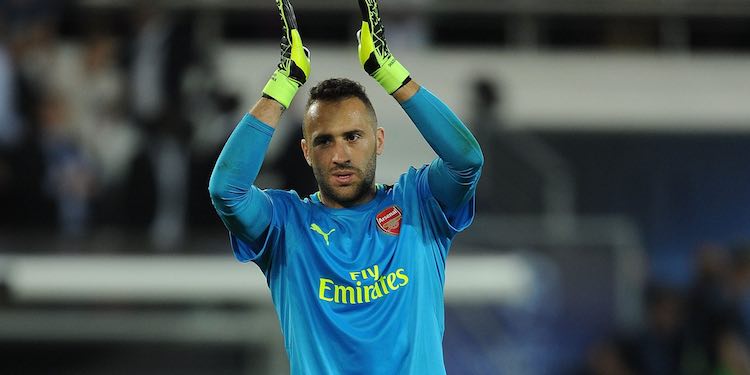 Even in the cold light of day it’s hard to look at last night’s game and not laugh. I think you have to laugh. Otherwise you’d kinda go a bit mad. A point away from home in the Champions League against the strongest opponent in the group is a result most of us would have taken, but you can’t just go ‘Hurrah, a point!’, and not look at how that point was earned.

I will declare myself very satisfied with the point itself, especially in the circumstances, but boy-oh-boy that performance left a lot to be desired. The manager’s team selection raised some eyebrows with David Ospina preferred to Petr Cech in goal, Coquelin and Cazorla in midfield again, and Alexis Sanchez selected up front as a striker while two actual strikers, Olivier Giroud and Lucas Perez warmed the bench.

We needed a good start, what we got was anything but. Serge Aurier broke down the right, he whipped in a great cross which left Mustafi stranded and Edinson Cavani, for that brief moment, remembered how to play football and headed past Ospina to make it 1-0 after just 42 seconds.

Defensively we looked a shambles. There were more chances for PSG when Koscielny blocked in the area and Ospina stopped an Angel di Maria corner going straight in. We barely threatened at all, and but for the fact that Cavani was an absolute horror show in terms of his finishing they would have been out of sight by half-time. He rounded Ospina when a Monreal interception fell into his path and stabbed it wide with the goal at his mercy. And late in the half he broke our offside trap too easily, chested the ball down with only keeper to beat then just fell over like a drug-addled mule.

He was, thankfully, rubbish. And that’s being kind to him. He was the worst striking performance you’ve ever seen from an Arsenal player, sprinkled with the essence of Diawara, baked for two hours and served up with a side of Chamakh and some boiled Diawara. So unbelievably bad. And we should thank ourselves lucky for that. In the second half he missed glorious chances again, but to be fair we have to give some of the credit to our keeper who made some excellent saves, the one where he palmed the ball away from him as he was going around him was superb.

Meanwhile, the centre of our defence was routinely exposed, and up the other end the absence of Alexis from the centre-forward position meant we have nobody ahead of the ball, unless it was Francis Coquelin – operating under the strange instructions he’s getting from Arsene Wenger. That’s really, really not his game, and it doesn’t suit him or the team.

Eventually we saw a change when Giroud came on for Oxlade-Chamberlain, moving Alexis left and Iwobi to the right. Xhaka made it on for Coquelin and although they still looked more dangerous, we resembled something like a team that was set-up correctly. Lucas Perez was about to come on, before Mesut Ozil – who had been quiet – found a great pass to Iwobi in the box, his shot was blocked but Alexis was on hand to slam home an equaliser.

Iwobi had a brilliant chance to win it for us, set up by Alexis his shot was tame, and the game ended in somewhat farcical fashion when Giroud was sent off late on. I can’t really see what he did to deserve a second yellow from the clip here, and I guess he can have some complaints about it, but had he not needlessly talked himself into the first booking it would be a moot point this morning. He’d already been warned by the referee over a couple of robust challenges, and an open show of dissent when he could have just shut up put him in a position where he could become the victim of some gamesmanship. It was daft really and not the first time his petulance has cost him in Europe.

Right at the death PSG might have won it from a corner, only Bellerin doing enough to put Marquinhos off prevented the defender having a free header at the back post. Afterwards, Arsene Wenger said:

I feel overall we played against a good Paris Saint-Germain team, who started much stronger than us. In the first half, our midfield played a bit too far from Alexis. In the second half we played higher, and after the kick-off in the second half we had a good chance to come back, which we did. In the end we have experience in the Champions League and we got a good point. Overall, I think it was a good result to come here and not lose and pick up a point.

And look, I think it is a good point. A really good point. When you play as poorly as we did, and when the opposition spurn the chances they had to score and put the game completely out of our reach, to come away with something is fantastic. Smash and grab and all that.

However, it’s possible to be both pleased at the point and deeply concerned about our performance. If PSG had a striker who wasn’t a lumbering buffoon then we’d have taken a pasting last night. The way we were cut open, almost at will, was very worrying, and the fact that the formation/system the manager sent out simply did not produce any kind of cohesive football surely requires a rethink at this point.

Defensively we were terrible, the midfield failed to get any kind of grip on the game, and I think we’ve seen enough of Alexis up front to know that it should really only be an option when we have no other choice. His desire to get involved in play means we have nobody central, at times it was Oxlade-Chamberlain sliding across, but others it was Coquelin trying to make darting runs in behind their defence. When that’s what’s happening, whether it’s by accident or design, I think it’s obvious you need very badly to go back to the drawing board.

We look no closer to finding a formula that works. Each thing has an impact on the rest. For me though it comes down to having a properly functional midfield that can help protect the back four, and also link with the attacking end of the pitch. Too many of the elements aren’t working, and while it’s still early in the season, the manager doesn’t appear to be sure how to put his pieces together. I suppose last night should, at least, show him that the team he did put out is one that he shouldn’t pick again – especially against quality opposition like PSG.

All in all, we take a point back home and whether we deserved it or not is irrelevant. What is key though is that we look at the flaws that were apparent from first whistle almost to the last and do something to address them, because other teams simply won’t be as profligate in front of goal. It’s all well and good grinding out results, and there is something to be said for that, but you just can’t do that for an entire season.

At some point you need to be able to control games, and win them on the basis of the quality of your own performance. Let’s hope we can find a way to start doing that soon. That our man of the match last night was our goalkeeper says it all (and fair play to Ospina, he was really excellent).