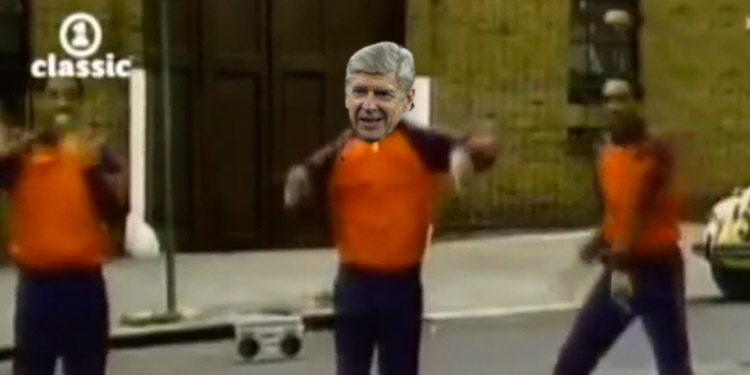 There are always lines. Lines between things. People will say, ‘There’s a thin line between madness and genius’, and perhaps that is true. Some people skirt both sides of the line. One minute he’s a madness line crosser because he’s invented a device that attempts to pre-butter your toast; the next he’s a genius, back on the right side of the line, because he’s created headphone cables that don’t tangle around the leg of your chair.

They also say there’s a thin line between good and evil but I don’t buy that. I’d suggest that’s a pretty thick line when it comes right down to it. Harry Kane thick. I reckon that one is something evil people say to try and make themselves feel better, but really evil people – like Jose Mourinho, Phil Collins or the makers of anything that deliberately tastes like cloves – don’t really care if they’re considered evil or not, because they’re so very evil.

But how does this apply to Arsenal? What line are we talking about here? Well, people often talk about how it’s a good thing when a football team doesn’t play particularly well but gets decent results. It would be fair to say that Arsenal did not play particularly well in their last two games, but on paper a win over Southampton (I had a dream last night they dropped the P from their name and everyone went ‘Of course!’), and a draw away at PSG are pretty decent results.

One Premier League win coming with three delicious points; and one draw away from home in the Champions League against the toughest opposition in the group who have only lost one game at home in Europe in years and that was against Barcelona. You can’t really argue with that, some would say, and I see that point of view.

But, the line. Where is the line between playing badly and getting good results, and playing badly and getting away with stuff in games that you can’t keep getting away with? For example, Arsenal could play badly from an attacking sense and not create very many chances, but late in the game a scrappy one goes in off a defender’s arse or someone pulls off a moment of magic to get the result.

That would be playing badly and achieving the result and you could make a case that it’s simple, if not easy, to improve on that. Create more chances, be more incisive in the final third, etc etc, and you you kinda have a platform on which to take the team forward.

However, if you’re playing badly and also giving the opposition lots of chances, I’d suggest that you’re the wrong side of this particular line. Look at Southampton last weekend. Yes, we kept going, we showed character and all that, but we also presented Shane Long with three very good chances to score a goal which would have had a significant impact on the game – especially as we weren’t exactly battering down their door from an attacking sense.

Thankfully for us, Shane Long had just come back from a refresher course at the Gervinho School for Strikers Who Can’t Strike Good and Want to Do Other Stuff Good Too. And on Tuesday night, Edinson Cavani’s movement and awareness caused us all kinds of problems, but the chap had clearly taken one footballing Viagra too many pre-game because he just couldn’t finish.

I think we badly need to get back on the other side of the line. Some would argue that we should try and skirt a different line, perhaps the one between playing well and really, really well would be better, but for now I think it’s hugely important that we look to sort out the defensive issues we clearly have. If you’re presenting the opposition with the amount of clear cut chances we are at the moment, that’s a big problem.

‘Who plays right wing?’ and ‘Are they effective enough?’ are questions that should really be secondary to ‘Why don’t we stop letting strikers have shots from very good positions because they’re not Cavani them for Long for long?’. If you get me.

I think we’re seeing something of an issue with new boy Shkodran Mustafi, and evidence of why signings made so close to the end of the window aren’t ideal. He’s been brought in with no pre-season, barely time to get to know people, and then chucked in to the team straight away. Which is not to suggest our defensive issues are entirely down to him, but it’s not fair to expect him to play at his very best in these particular circumstances.

One might also wonder if there’s some correlation between Francis Coquelin, ostensibly our DM, playing a role which sees him pressing high up the pitch, making darting runs into the opposition box (at times because nobody else is), and generally being all over the place (most likely because that’s what he’s being asked to do), and the fact that our defence is so easy to cut wide open.

The opposition strikers won’t keep missing the chances if we continue to allow them. There’s room to improve us up front, no question, and obviously I hope we do find a way to click up there, but until we sort out the gaping holes and the gift-wrapped opportunities, we’re going to find it hard to remain on the right side of the line.

So, in conclusion: do more lines, Arsene. Get that tactics board out, chop out some footballing whizz, and get snorting till you find a solution (which might involve Granit Xhaka and more positional discipline from our midfielders).

Right, that’s that for this morning. Tim Stillman will be here later on with his column, and I’m back tomorrow with an Arsecast, and we can start looking ahead to the Hull game this weekend.