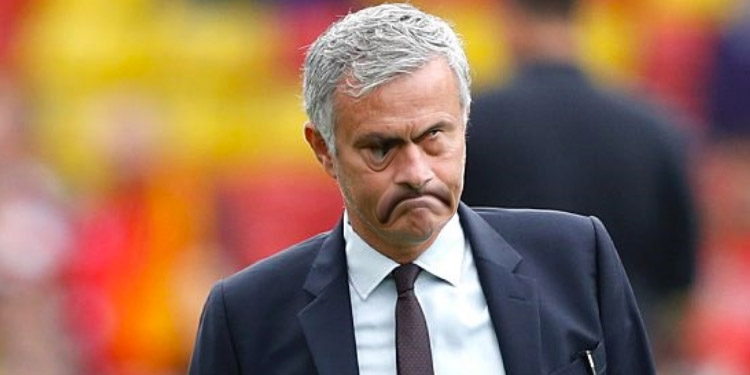 Good morning. Hope you had a good weekend. Perhaps, like me, you attended a sporting event. I was at the All-Ireland Football Final between Dublin and Mayo at Croke Park. It ended up in a draw and there’ll be a replay in a couple of weeks and there were lots of players slapping the heads off each other. Fun!

You know who didn’t have a good weekend? Jose Mourinho. And that made my weekend better. Manchester United lost 3-1 to Watford and on pretty much every level that’s amusing. The post-match interview during which Mourinho described a litany of referee errors, almost Benitez-like FACHTS, from the last week made it even more so. That’s three defeats in a row now for them, and while I think they have the stature and quality to do a lot better, it would be remiss of us as decent, normal human beings not to stop and laugh when bad things happen to them.

Sure, Pogba won’t be terrible forever, people are writing him off far too quickly, but watching him being stifled by the presence of Wayne Rooney is something to cherish in the short-term. Should we be bigger, better people and not take such pleasure in the startling demise of a formerly great footballer? My arse.

May the decline be inexorable but glacier-like, all the while he stays in the team spreading 60 yard passes to nobody, thinking about what kind of sandwich he’s going to have for second breakfast.  Probably a lard roll, filled with blubber and the emulsified remains of an elephant seal, covered in batter, deep fried, and served with a stick of butter on a stick.

What else did we learn this weekend? Well, things are not going well at Stoke, which is also amusing. They’re bottom of the league having been spanked 4-1 by Crystal Palace. Again, this has tickled me. We don’t go there until May 2017, so hopefully by that time they’re already down and we’ll have had the league wrapped up so when they play their inevitable good game against us, it won’t even matter. For now though, we can just snigger gently at Mark Hughes.

We also discovered that Francis Coquelin is a loud shouter. He said of Granit Xhaka’s goal against Hull at the weekend:

I think it was a superb finish. I was right behind him and I don’t know if he was going to shoot, I was screaming at him ‘shoot, shoot’ in German.

Here’s the situation as it played out. You can see the two players clearly marked on the hi-tech graphic:

Now, if we’re being pedantic, Coquelin was not ‘right behind him’. He was slightly behind but some yards to the right of him. How can we be expected to trust this story if such an obvious part of it is so clearly disproved? Also, having used the latest state-of-the-art CSI style video enhancement technology, we zoomed in on Coquelin. Then zoomed in some more. Zoomed in. Zoomed in a bit more. And then a bit more.

It may be that the enhancement tool needs to be refined a bit further. Or we need a better lip-reader. Either way, it was a very sexy debut goal for the club, and that’s part of the discussion in today’s Arsecast Extra which will be available for you later this morning (we recorded it last night you see).

We ought not to forget that this midweek we have EFL Cup. This is the English Football League cup, this season without a sponsor like Carling, or Capital One, or Milk, or Coca-Cola, or Rumbelows. It’s a bit of a shame. You’d think they could have found somebody to sponsor it or, if you can’t do that, just pick a random company and give them the honour of being the name of this most prestigious of trophies.

What a thrill it would be for players to compete for the ‘Mutt and Jeff – Daycare for Deaf Dogs Cup’, or the ‘Lino Richie – Discount Carpets and Vinyl Cup’ (this is a real thing!). Instead we’re left without any kind sponsor at all, and as we all know anything in football that is not monetised within an inch of its life is essentially valueless.

The competition does give the manager a chance to rotate his squad, and tomorrow’s team should include the likes of Kieran Gibbs, Rob Holding, Gabriel, Oxlade-Chamberlain, The Jeff, Chuba Akpom, Barnaby Stingwing, and others from the fringes of the first team squad. It should be interesting to see what team he picks, and of course we’ll have the prospect of facing our old pal Nicklas Bendtner now that he has gone to Forest for the football and not the fast cash.

More on that one tomorrow. We’ll have a Tactics Column for you later, and of course an Arsecast Extra. As I mentioned we recorded it last night, so there’s no need to send questions to us this morning. I’ll lash that up mid-morning for your aural pleasure.

Right, that’ll do. We’ll have all the news of the day over on Arseblog News. For now though, double-hoopla in all your wardrobes. Especially Jose Mourinho.