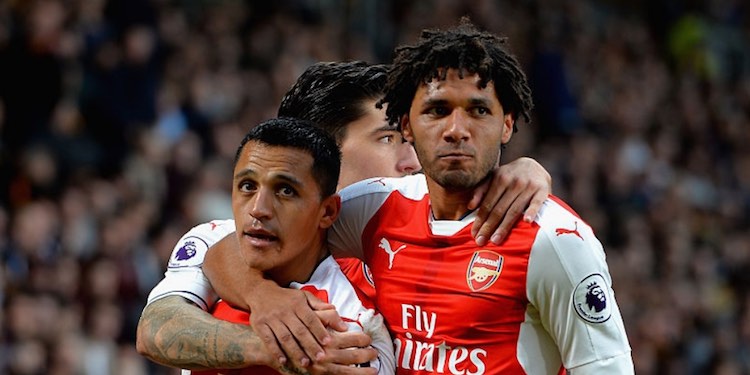 Sometimes I wonder if we’re like Prince’s mother: never satisfied. We beat Hull 4-1 yesterday and in the immediate aftermath my thoughts were that we made life unnecessarily difficult for ourselves, and we should have won the game more comfortably. Playing against 10 men and at 2-0 up we seemed content to just pass the ball about without a great deal of urgency or purpose.

Then they got a penalty, scored it, and for a few minutes I was dreading having to write about the inevitable injury time equaliser they’d score. Instead, Alexis fired home his second of the day, before substitute Granit Xhaka opened his Arsenal account with an absolute rocket of a shot. 4-1 added gloss to the scoreline that should have been there before we let Hull back into it, and I felt like we could have turned the screw earlier.

Then, with some reflection, you think a 4-1 win away from home after an away trip in the Champions League really isn’t something to complain about at all. Not that there aren’t things to think about or discuss, but maybe there should be more focus on that than the things which weren’t quite right.

I think there were more positives than negatives, but it’s still difficult to know exactly what to make of this team just yet. The confusing era of Alexis up front continued with the Chilean looking far from convincing in that position. And yet he ended up with two goals, bringing his tally to the season to 4. He was underwhelming but scored twice. What do we do or think about that? I don’t really know.

Outside him Theo Walcott’s pretty positive start to the season continued, he’s certainly much more effective than last season. He created a great chance for Alexis to balloon over the bar, it was his cross which the keeper parried out for Iwobi’s shot for the opening goal – deflected in by Sanchez – and he made some positive contributions. He scored a goal, wasted a great chance for another, but was generally much brighter and involved than he has been.

Then there was the penalty. Coquelin’s shot was saved by Jake Livermore and the referee awarded the penalty and sent the man off. Rather than the efficient, quite good at penalties Santi Cazorla taking it, Alexis stepped up and promptly missed because he’s not that good at penalties. I think he has a 100% record of missing them for us, and someone needs to have a word. Afterwards the manager said:

Santi was down to take it. I don’t know why it did not happen, they have pecking order, it was not planned for Sanchez to take it. I want to know what happened and for it not to happen again.

Alexis being a greedy guts, I imagine. In one way you want your strikers to have that desire, but you also want them not to take a really really shit penalty, so when you do just that you’ve got to take the blame. Alex Iwobi’s assist for Walcott’s goal was fantastic, and at 2-0 up early in the second half I would have really liked us to turn the screw. Instead it became an exercise in bumping up passing stats, little 2 yard passes that look fine but lack incision.

Then they got their penalty and even Wenger said afterwards that ‘You never know what can happen’ and that he’d have liked the team to play with a bit more purpose in the second half. I thought it was one of those ones where the player falls into the keeper rather than the keeper taking him out, and the referee didn’t seem at all convinced either. He was quite happily playing on until his assistant buzzed him on the wotsit and only then did he award the penalty. A bit weird really.

Then there were the scary minutes, but Alexis’ second goal came from a chance he created for Walcott. The initial shot was saved, he picked the ball up, stepped inside a defender and the finish was emphatic. Then, in injury time, Granit Xhaka did this:

Blimey, what a way to open your Arsenal account. It was a surprise not to see him start the game, but he’s definitely sent the manager a little message there. Coqzorla operated pretty well yesterday, with Coquelin much more disciplined positionally than he has been in recent games, but you can see that Xhaka definitely adds something to our midfield – not least of which is the gumption to make something happen rather than play another trickling pass to a teammate.

I think overall we had a convincing performance in two different situations. 11 against 11, I thought we played well. When you play 11 against 10, it is, of course, not the same mentally and psychologically. But we remained serious and in the end we won the game in a convincing way.

And was full of praise for Alex Iwobi, saying:

I started him last year because I’ve seen that there’s something in him that is quality of vision, quality of give and go, of movement. He can break the lines with a pass and individually as well, so there’s a lot in the locker. Overall, he’s only 20 years old so you could see that he has gained in confidence now. He can take people on much more and he has gained power as well. It’s interesting what he has done.

I thought he was excellent yesterday, although I do still harbour some concerns over the quality of his defensive work, but if he can improve on that we’ve got a player of enormous potential here. There’s just a positivity about his play that’s infectious. He doesn’t always play it safe, and sometimes things don’t come off, but you need players who are willing to take a bit of a risk in the final third.

Overall, a solid win away from home and there were some promising signs. I know we played a long time against 10 but defensively we looked more solid, and had we been more efficient in front of goal this game would have been out of sight much earlier (a familiar complaint I guess, but at least we’re making the chances).

Tuesday night’s EFL Cup game will give a chance to some fringe players to stake a claim, before a genuine test next weekend against Chelsea. The response to losing on the opening day has been decent overall, but facing a big team like that will be a real measure of where we are and how we’ve progressed.

For now though, we can enjoy the Sunday papers and yesterday’s win. Till tomorrow.