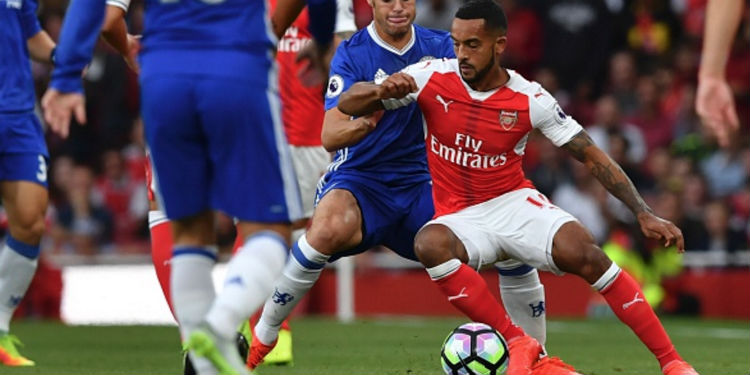 Is everybody still basking in the glory of Saturday evening’s sumptuous victory?

Of course you are. Quite right. Well done you. Soak it up. These glorious moments don’t come around nearly as often as they should.

Blogs has asked me to fill in as he makes his way back to Dublin. From the hotchpotch of messages I’ve had over the last few days, it’s fair to say he’s completely smitten by the Big Apple and the generosity and hospitality of the Stateside Gooners who assembled for Sunday’s Arsecast Extra Live in the Barleycorn bar.

In his absence, there’s not a great deal going on…

The boss has had some very warm words for Theo Walcott – a player who had an abject 2015/16 – claiming this summer’s England snub has spurred a renaissance in form. I think we can all agree that three goals in six games represents a decent return so far. However, it’s his tackling stats that are particularly eye-catching.

His willingness to track back hasn’t gone unnoticed, with Wenger remarking:

“I think he used to be 90 per cent forward and 10 per cent defending. Today he is 50:50. He does the job both ways and he does it both ways with commitment. And I always felt there is character and intelligence in this boy. He is a guy with a good assessment of his performances and qualities.”

According to Opta, Walcott has already made more tackles (12) in six Premier League appearances this season as he managed in the last two seasons combined (11). That’s astounding. It almost warrants the use of an exclamation mark, but I hate them, so it doesn’t quite. Either way, let’s hope he can it up. If there’s one thing a crowd in England appreciate it’s a striker forcing a panicked defender to hoof the ball into touch right by their own corner flag. It’s as far removed from tiki-taka as you can get, but it’s still fucking great.

Later today we should get some team news when Wenger hosts his pre-Basel press conference at London Colney. There’s talk that the injury picked up by Francis Coquelin at the weekend might not be as serious as first thought.

Yesterday, a picture surfaced of the Frenchman sporting a leg brace in the reception area of a North London hospital. Given the boss had said he was fearing the worst – mostly because the problem appeared to be in the same place as he’d sustained knee ligament damage last season – it led to a couple of stories about the midfielder being out until after Christmas. Thankfully, L’Equipe say he could return after the international break – an absence of up to three weeks.

In the 29 minutes he was on the field at the weekend, I thought Coquelin looked great. He was energetic and aggressive but without losing control. On a number of occasions, he could be seen signaling to Petr Cech to calm the tempo. In a side that isn’t overly vocal, he’s got a real bark and that’s a quality that shouldn’t be underrated. After a slight dip in form last season, it looks as though he’s regained his focus. Perhaps knowing you’ve got Granit Xhaka and Mohamed Elneny waiting in the wings has helped?

Both of them will be eager to feature against their old club on Wednesday evening, the former potentially against his brother for the second time in a matter of months. Last time it was at international level when Switzerland played Albania at the European Championships.

For what it’s worth I think Xhaka will get the nod alongside Cazorla, although I’m expecting changes elsewhere in the side. David Ospina, hero of the Parc des Princes, will probably start in goal and Lucas Perez will be chomping at the bit to get more game time after his brace at Nottingham Forest. Given Olivier Giroud is banned for the red card picked up at PSG, the Spaniard should be the go-to guy if the boss chooses to rest Alexis or Theo Walcott. Three points at the Emirates tomorrow would put us in a strong position before the double-header with Ludogorets.

Blogs will be back in the morning with a more comprehensive preview of Wednesday’s match. If I was a betting man, I’d say he’s probably got a thing or two to say about the sticky situation Big Sam finds himself in right now too. It really would be rather remarkable were he to get sacked after one game in charge having pined after the England job for so long. The daft Walrus c*nt.

Until then, you can keep abreast of any breaking stories on Arseblog News. Until next time.