It is fitting that for the game that celebrated his 20th anniversary at Arsenal, Arsene Wenger would rediscover his religion. Because, in defeating Chelsea with style, pace and movement – “the kind of football we want to play”, Wenger said after the 3-0 win – he has stumbled on the solution that he has been searching for for the best part of half a decade.

It has been an internal struggle almost, to stay relevant, when football has gone through two circles, from possession to counter-attacking – and it seems back again – and Wenger has tried to find a way that allows him to be himself within the changing demands of the modern game.

In 2009 he moved away from his modus operandi, the 4-4-2, which he says is “the most rational formation in most cases: the essence of reason,” to various guises of 4-3-3 which, to begin with, was to fit the man who was on the opposing team on Saturday, Cesc Fabregas. Yet the imprint now is markedly different and that was exemplified by the way the former captain was overrun in the Chelsea midfield, particularly in the first-half, by Arsenal’s swift passing.

The key men were the two wingers, Theo Walcott and Alex Iwobi, who constantly varied their positioning to wreak havoc to the Chelsea’s marking system. At the same time, Alexis Sanchez’s movement away from goal helped to overwhelm the vistors’ backline. The dilemma was thus: with at least three players moving between-the-lines, (and Mesut Ozil also breaking beyond), it provoked the defence to react. Should they push up to track Alexis’ false nine movement knowing that they would then leave space behind? Or drop off, meaning it would just grant more space for the Arsenal midfield to play? Indeed, the latter was always the fallback option for Chelsea in the league over the years as they would simply soak up Arsenal’s pressure, and then pounce on the counter-attack.

However, the movement here was plural because Iwobi would often step inside, dragging his full-back with him, whilst Walcott would do the same before spinning behind. Ozil, in between, had a free role, darting into whichever spaces became free. If he moved forward, then Alexis dropped into his position; if Ozil dropped deep, then Alexis would most often still drop deep.

The result was that it distorted Chelsea’s defence, forcing them to make a decision between following – if they dared – or risk marking space if they didn’t. The latter is the safer option, but as exemplified by the second goal, it’s a decision Chelsea took to disastrous cost. Because only Gary Cahill attempted to get tight to one of the front four – and even that was a half-hearted effort. Instead, the backline remained largely the same position as it did when Mesut Ozil received the ball the first time 30 metres outside the box, to when Walcott put the ball into the back of the net from in front of the six-yard box.

At the same time, the goal was the culmination of Wenger’s ideals. A lot of attention will be placed on the interchange initially between Iwobi and Ozil that created the goal – and rightly so, because what a pass that was from Ozil to Iwobi’s feet that changed the direction of the attack – but that was the second phase of the attack. Initially, the move started when Francis Coquelin won the ball back in front of his own box, alert to cutting out a through ball from Nemanja Matic.

Indeed, that desire to get back into defensive positions is probably why Arsenal are playing so well, and the fine point which determines whether a manager’s game-plan is a success or not. Wenger has talked about the team maturing and relishing the responsibility, “a team of what you can call men, ready to compete”, something which he hasn’t had for a long time. That’s probably more relevant in a defensive sense. In the 1970 World Cup, Brazil coach Mario Zagallo asked his team to team to drop off because they weren’t characterised by strong marking. But the personality of the team motivated them to come behind the line of the ball, and defend in a 4-5-1.

There’s more conscious pressing from Arsenal this season, but if they don’t win the ball high up, then it’s important that they funnel back quickly. Theo Walcott has characterised this approach, winning the ball back in 12 times in 6 games, almost as much as he did the entire of last season (18 times). On the other hand, it’s probably not surprising that in the first few games, Iwobi, the youngest player, was caught highest up the pitch, but here, he was part of a game-plan that broadly fell back into a 4-4-2 shape. It’s a platform that allows the team to break quickly and effectively when they win it back with the third goal a great example of that.

Both Ozil and Alexis are the outlets and, in the two minutes leading up to that goal, you could see that Arsenal actually had three chances to free the German on the break. Twice he was marked tightly and the ball was turned over; on the third the attack broke down; but on the fourth attempt, he produced a sublime turn that left N’Golo Kante still scratching his head. The counter-attack was devastating, requiring just a touch for Alexis to find Ozil, whose shot skittered in off the back post.

We saw Alexis’ role too on the break, where he tends to play on the shoulder of the last defender, but when Arsenal have the ball, drops off into gaps behind the midfield. His goal was an example of how he comes alive when the Arsenal are defending, a constant menace to the opposition backline, especially if they commit the grave error of passing it backwards. Indeed, both Alexis and Ozil did this well all game, not allowing Chelsea the easy ball out when building out.

It means that the two wide players must be really committed to get back to shape, and as this analysis from @GameChangerEW explains, Iwobi would often tuck in as an auxiliary central midfielder. The result was, yes, that Arsenal would often narrow in the defensive phase, and Wenger at the end of the game was keen to point out that there are areas to improve there, but at the same time, the two centre-backs were superb, accosting Diego Costa every time Chelsea looked to give him the ball.

The consequence of the first-half blitz was that the second-half was “a bit in-and-out”, as the manager said, but still, the team kept playing at a high tempo. Francis Coquelin set some of the drive early on by regaining possession in dangerous areas and after the Frenchman was injured Granit Xhaka tried to continue that role. His passing impressed more than his tackling, though it’s a peculiar role that he’s trying to fill. One blog called Coquelin’s role, “a false six”, though as he grows more confident in the position, (if we see it, because the injury he suffered is likely to be severe), we’ll see it becoming more orthodox, more box-to-box.

What the team loses in Coquelin’s ability to bring the team up the pitch, it gains with Xhaka’s passing because with the game-plan that Wenger has set out this season, it looks like the team is trying to get between-the-lines as much as possible. Alex Iwobi confirmed this when he said after the match that the team is just looking to bring the things they’ve been doing in training, on the football pitch, and his role is crucial, stepping in from the line when he can, dragging his full-back with him. It generally tends to be a late movement otherwise you lose the unpredictability when the ball is played through to you. Walcott, on the other flank, does the same, and indeed, he’s protecting the ball better now, bumping the ball off his team-mates with more confidence. 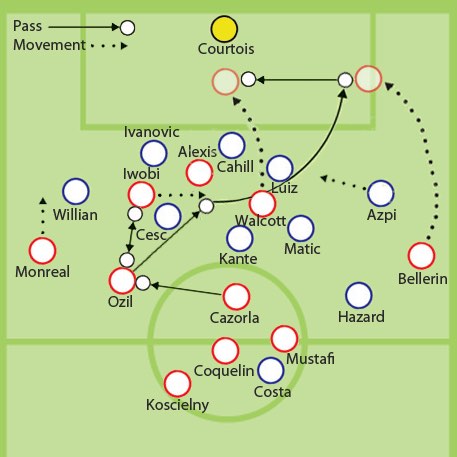 For Wenger, having these “vertical links” has been the staple of his best sides. It reminds me of his comments in the past, when he said his preferred formation is to “have one behind the striker, and one or two on the flanks who come inside. I always feel that if you have players who can deliver the decisive ball in all areas of the pitch, you have many more chances of being creative. If it’s only focused on one central part, where it’s usually more concentrated, you have more space on the flanks to create.”

Certainly, that was the set-up Arsenal deployed to such effect against Chelsea.