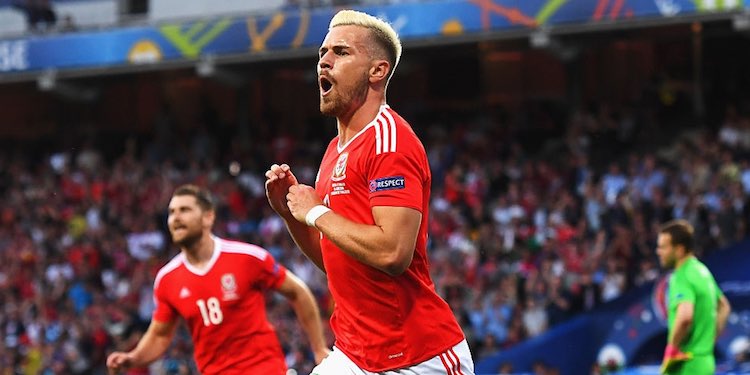 Work yesterday evening meant I was restricted to watching England v Slovakia on my laptop, which turned out to be a tremendously dull affair. Meanwhile, Wales were demolishing Russia 3-0, with Aaron Ramsey right at the centre of all the action.

He opened the scoring in the 11th minute, latching onto a nice pass from Joe Allen before clipping over the keeper like so:

Neil Taylor made it 2-0 just seven minutes later, and in the second half Ramsey crafted a third for Gareth Bale:

His performance had people purring, hopefully it’s something we’ll see more of in a red shirt next season. This one with cannon on it rather than a dragon.

It was a fantastic feeling to score in this competition It was a great ball from Joe Allen, I made a run and he saw the run early then I saw the goalkeeper and I thought I might lift it over him so I lifted it over him and thankfully it went in and when it goes in it’s a goal which is ever so nice. I ran away in celebration but the lads caught up with me and we had a lovely cuddle, before making our way back into our own half in order for the referee to restart the game because that’s the procedure after a goal is scored.

That win coupled with England’s stupefying 0-0 draw meant that Wales topped the group, which is brilliant for them. We have no idea yet what it means in terms of knockout opposition as there are still so many games to play, but they really look like a team that has their shit together, and the response to that heartbreaking late defeat was very positive.

England, meanwhile, failed to build on that result and look pretty one-dimensional. Jack Wilshere started but didn’t really impress – I suspect Roy Hodgson’s lack of a clear system and the fact that he just can’t possibly be match fit played a part there. He made way for Wayne Rooney in the second half, which must have left Jordan Henderson the most relieved man on the pitch.

England huffed and puffed but couldn’t break down the Slovakian defence. Jamie Vardy was stymied, Harry Kane could do little when he came on, and without anyone really willing to take a risk, the football was predictable and easy to deal with once the opposition stayed relatively well organised – which they did. It wasn’t too dissimilar from the Wales game, only a late, late breakthrough added gloss to that result, but performance-wise it was more of the same.

It’s not as if England don’t have some good players, although I do find bemoaning the absence of Andros Townsend a little odd.

The one common criticism coming from pundits who were otherwise positive about #ENG last night: lack of width. Townsend omission costly.

Maybe I’m no expert but if your hopes of breaking down a packed defence at an international tournament are dependent on a player who got 2 assists in the Premier League last season for a relegated team, then there’s something quite wrong. It all feels very familiar for England though, but they are through the knock-out rounds and will have to hope that they don’t Sp*rs themselves up completely when they find out who it is they’ll face.

Today there’s a veritable feast of football with Northern Ireland playing Germany and Poland facing Ukraine at 5pm, while at 8 we’ve got Croatia v Spain and the Czech Republic v Turkey. It’s harder to pick for these final group games because the dynamics have changed and some teams are already qualified, but a shifty foursome with wins for Germany, Poland and Spain and a draw between the Czechs and Turkey is where my money is going today. That said, it’d be great to see Northern Ireland get another result, so fingers crossed for them.

Not much going on in the world of Arsenal, but in that Jamie Vardy video the other day, Arsene Wenger specifically mentioned Julian Draxler, a player we’ve been interested in for some time. There were reports of an imminent bid back in January 2014, but that never came to pass and he moved to Wolfsburg last summer for around €25m.

Yesterday there were some reports which said he was unhappy there and wanted to leave. Unfortunately, those appear to have been erroneous, nevertheless, if there were a chance of him being on the market this summer, you’d hope we might rekindle our interest in him.

It’s gone kinda quiet on the wide-man front, stories linking us to Henrikh Mkhitaryan have died down for some reason (despite some serious contact between all parties), so maybe we have our sights set elsewhere. Arsene Wenger does love a player who he can ‘rescue’ to a certain extent, and maybe Draxler would be another one of those to arrive with his stock slightly lowered before finding his way again. Speculative, I know, but I’d be all for it.

Finally for today, a reminder to check out this week’s Arsecast Extra. James has a horrible time in Scotland and his journey back from there to London makes that of Frodo and Sam to Mordor seem like a walk in the park. There’s transfer guff, Vardy, Euro 2016 waffle and loads more. Listen below.

There you go. Any news throughout the day we’ll have for you on Arseblog News, and I’ll be back here tomorrow . Until then have a good one.