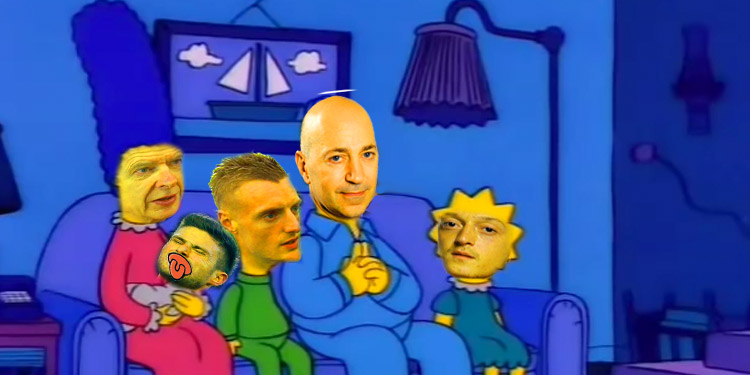 Ok, so yesterday I jokingly referred to the Jamie Vardy thing as a saga, and then it sort of turned into one. With people expecting a decision one way or the other – would it be black or white smoke that emerged the Vardine Chapel? – he decided that he wasn’t going to make a decision until after the European Championships.

Why exactly, I don’t know. It may be a case that he and his agents are trying to squeeze every possible thing out of the deal, although the three year offer from Arsenal at a wage far higher than the one on offer from Leicester is a very, very good one for a player of 29.

It might be that he’s doing what Roy Hodgson asked – focusing entirely on England for the duration of the tournament because he doesn’t want to become a possible distraction. Or he could genuinely be a bit torn about leaving a club to which he obviously has a connection and where he’s had a fantastic time.

I know there’s one school of thought which says ‘Well, if he doesn’t want to come play for us right this minute, tell him to get stuffed and move on’, but I don’t think it’s that simple. I’m pretty sure he does want to come and play for Arsenal, the way that things leaked suggest that much, and the club were confident that a deal would be done. At the end of the day though, these are people we are dealing with, not robots, so we have to take into account human nature, actual emotion and so on.

And as I said earlier in the week, it’s rarely a case that clubs agree before the buying club is aware that it’s worth their time and effort in doing that. It’s very often the case that the initial approach is made on the basis that they know the player is interested in a move, and I’d be staggered if that wasn’t the case with Vardy. The story is that Arsenal are prepared to wait for that decision, and I’d still be surprised if he turned down the chance to make this kind of a move at this point of his career.

It might take a little longer than people wanted, but it is just June. And it’s also completely and utterly out of our control, so going absolutely mental about it seems pointless. There’s always been an element of ‘I want it NOW!’ when it comes to transfers, but if it happens now or in two weeks it doesn’t make any real difference.

The only thing I would say is that this delay should give Arsenal some time to consider what happens if he does decide to stay at Leicester. At this moment in time it appears that all our striking eggs are in the Vardy basket, so to speak, so what happens if he says no? Again, I don’t think that’s likely, but it’s not impossible and at that point we need to be in a position where we can move on swiftly and decisively.

For now though. We wait. Patiently wait.

Laurent Koscielny has been speaking ahead of the Euros, and said that while Arsenal finished second last season it was a ‘disappointment’ overall. He becomes the first player this summer to talk about possible transfers, saying:

We have to keep the positive from this season to learn from it, and start a nice season next year, with probably some new players that will allow us to reach another level and have more consistent results.

And he was also asked about Jamie Vardy, a bit like Olivier Giroud the other day, but he was a little more ‘Arsenal’ about his response that the striker, saying:

You know, I don’t like to talk when it’s not signed. So as I said, he’s a great striker, he did a great season with Leicester. I don’t know if he’ll stay or if he’ll join another club. We’ll see, but he’s a great quality player.

Giroud, if you recall, was a more loose lipped, saying he was told Vardy wanted to join us. Some people have suggested that this has had an impact on proceedings, which is nonsense really. It wasn’t the smartest thing in the world to say, but £20m+ transfers don’t break down because a player who has no part in said deal whatsoever says something he probably shouldn’t. Things are a little more complicated than that.

Meanwhile, at the Copa America, things are mixed for the Arsenal players. Alexis Sanchez and Chile lost 2-1 to Argentina the other day, while Joel Campbell as Costa Rica got battered 4-0 by the USA last night. It’s going quite well for Colombia and David Ospina though. They won their first game against the USA last week, and last night they beat Paraguay 2-1.

The Arsenal man made a brilliant save (feet behind the line and all!) but also let one in from distance. To be fair, it was an absolute belter of a goal. Could he have done better? Perhaps, but I suspect he might have been better served trying to grow a few more inches his teenage years. Shocking dereliction of duty there.

Chile play again on Saturday against Bolivia, and of course the Euros kick-off on Friday with France v Romania where Giroud will take to the field, score twice, set up another, solve the world’s energy crisis, bring peace to war-torn nations, find a cure for Phil Collins, make Jose Mourinho go blind and still get booed off. Can’t wait!