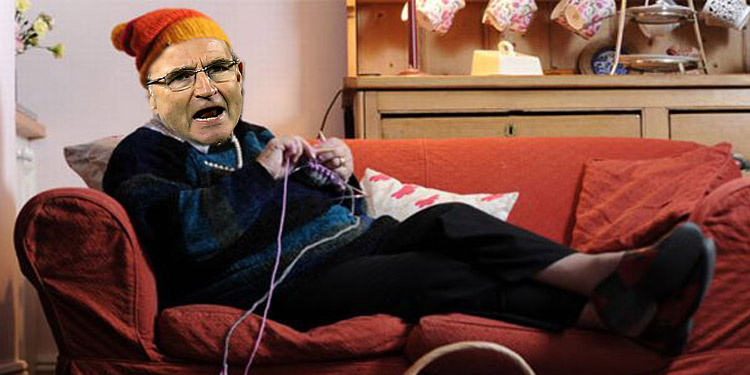 It’s very quiet this morning even though the European Championships start tomorrow. I’m looking forward to the football but in very much a neutral capacity. I know Ireland are in it, but there’s just something about Martin O’Neill that puts me off.

I don’t even mean the prehistoric stupidity he involved himself in last week, he just puts me on edge. It’s like your nana has come back to life in the body of a man who doesn’t quite understand he’s your reincarnated granny and has struggled with this for his entire existence.

That said, Roy Keane is great value. I know those who remember that great rivalry with United so well are not predisposed to kind thoughts about him, but there’s something very entertaining about a man who refuses to play the classic football game of talking a lot but saying very little. Despite getting older and more experienced, he simply will not filter his thoughts in any way. He says what he thinks.

Last week, after a friendly game in which a mostly second string Irish side were completely rubbish and beaten by Belarus, he said he wanted to ‘kill’ some of the players and then was asked about Aiden McGeady, ex of Celtic and Everton. He said that he ‘can do a lot better, but maybe that’s the story of Aiden’s career.’

You have to love that. When managers and coaches spend day after day talking in platitudes and cliches, to hear the assistant manager of Ireland say that about a player just days before a tournament begins is something to cherish, in my opinion.

Imagine if Ray Lewington, Roy Hodgson’s assistant in the England set-up, was asked about Jordan Henderson and said ‘He’s grand but he’s no Steven Gerrard, is he?’, or when pressed about Daniel Sturridge’s fitness replied, ‘He needs to toughen up, it’s all in his head’.

Quite what it will do for morale within the Irish squad is a reasonable question, but I don’t think it’s going to be a significant factor in how Ireland perform. Keane is generally not known for his diplomacy and tact, his blunt talking sparked the end of United career, so when you roll him out for a presser, you can’t be surprised when he lets rip.

Afterwards, O’Neill said, ‘Roy’s words were slightly on the strong side,’ before his mind turned to knitting a scarf for his grandson, made from that really itchy wool that they made jumpers out of years ago, and making gooseberry jam. ‘I don’t even know how to knit,’ he thought, ‘why does this keep happening to me?’

Of course we’ll be keeping progress of the Arsenal players at the tournament and hoping they do well. I’m interested in what Jack Wilshere does for England in particular. There’s been plenty of criticism over the decision to take him which is perfectly understandable. He missed practically the whole season, and even if he’s ‘fit’ he can’t be match fit. There’s no way to judge his form because he’s played so little football, but Hodgson obviously wants him for his talent and his ability to make things happen.

It’s definitely a risk because for all his talent and potential, the only consistent in Wilshere’s career so far has been injury. I have a lot of sympathy for him because he has been unlucky in that many of them have been impact injuries and bad challenges that have left him broken. Yet there’s an inherent problem in that the knocks that would keep another player out for a specific period of time leave him sidelined indefinitely.

His leg break on the eve of last season is an example of that. It should have been 6-8 weeks but it was complicated because of the other injuries he’s had. The ankle problem is one he’s going to have manage throughout his career, and it’s difficult to see how it’s not going to have an impact on him.

Still, if he can play and perform well for England, it gives us some hope that he can contribute for us next season. I don’t think he’s exactly in the last-chance saloon from an Arsenal point of view, but he’s standing outside – having a crafty cheroot – and if he misses another lengthy period through injury, you head towards a scenario where you have to make a decision about him one way or the other. Fingers crossed he does well and it goes well. It would be a real shame otherwise.

In other news, L’Equipe report that Mathieu Debuchy wants to leave Arsenal as he believes Arsene Wenger won’t give him a chance. I wonder why that would be. It certainly wasn’t a case last summer that Debuchy simply refused to compete with Hector Bellerin, showed no fight whatsoever and agitated to leave on more than one occasion because going to the European Championships was more important to him than anything else.

Oh, hang on. It was exactly like that. While I do feel for him over the injuries, I don’t think there’s going to be anything standing in his way, other than trying to find somebody to buy him. I suspect for Arsenal it’s a take what we can get situation in terms of the fee, and we’ll be happy to have his wages off the books.  I do think there’s going to be some jiggery-pokery in the full-back positions, but all will become clear as the summer progresses.

Right, that’s that for now. Tim Stillman will be here with his column later on, more from me tomorrow. Until then, have a good one.

MY GOD WHAT IS HAPPENING?

Is Marc Overmars set to become the new Dick Law?