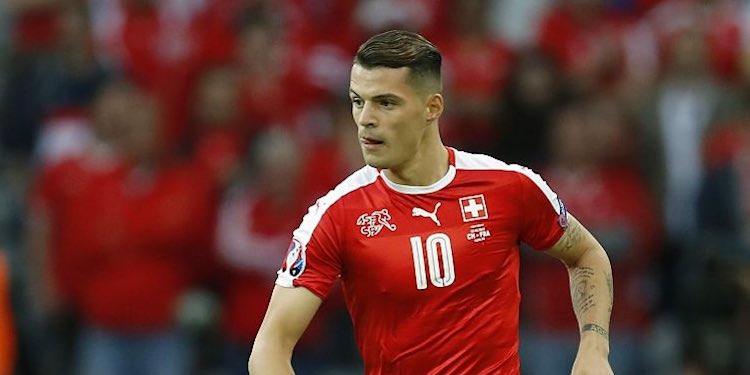 Morning all, a quickie for you and who doesn’t love one of those?

The knock-out stages of the European Championships begin today and there’s Arsenal interest in the first two games. Granit Xhaka will be on show for Switzerland when they face Poland who may have Wojciech Szczesny back in the side.

‘On show’ sounds wrong. Like he’s an ornate lamp, or a statue, rather than a quite good indeed midfielder. We will be able to watch him, like a film or a performance of some kind. He’ll be kicking a ball, I mean, mostly to men in the same coloured shirt and sometimes from quite far away. He’s good at that.

Will they have enough to beat Poland? Can that Stoke fella who looks like a barrel with legs actually do something in this game? Will Robert Lewandowski score a goal? All will be revealed later on, that one kicks off at 2pm.

After that it’s Wales vs Northern Ireland, and the Arsenal interest in that one comes via Aaron Ramsey. He’s having a very good tournament, perhaps eclipsed by Gareth Bale’s goals, but he has a goal himself and two assists. His international manager Chris Coleman reckons he’s going to do something special in this game, saying:

Positionally, he’s better, he’s a lot more disciplined with us. But when you have a player with that type of energy, you don’t want to restrict him too much, you’ve got to let him express himself and enjoy himself.

It will be interesting to see what Arsene Wenger has planned for Ramsey next season. Was the purchase of Xhaka made not only to provide us qualities we’ve lacked in midfield, but also to provide Ramsey with the kind of partner he can thrive with? The manager picks him when fit, but it’s fair to say that there have been issues of balance and he hasn’t really clicked with anyone in a significant way.

Not since he had that great spell when he and Mikel Arteta found their groove, so maybe that’s part of the plan for the new campaign. We’ll keep an eye on the two midfielders today in their two games, and then speculate whether or not they’ll fit when they pull on red and white in August.

The late game sees Croatia take on Portugal. A hard one to call that, but Arsene Wenger tipped the Croatians as something of a dark horse in this tournament, so I’m following that advice with my bet today. Wins for Poland, Wales and Croatia is where my tenner is going today.

Elsewhere, Alex Iwobi has been named in Nigeria’s provisional squad for the Olympics in Rio in August. This is an interesting one for him, and I’m sure he’d be very honoured to represent if he was chosen. If he were to be completely focused on his club career though, he might think it not the best idea to be away at the start of the season when we are going to have to give some players a rest.

Alexis Sanchez, for example, is going all the way with the Chile team in the Copa America. We know what the consequences of not giving him a proper holiday are, and I would hope that this summer we do better and make sure he gets some genuine rest, and then has a proper pre-season. If that leaves him sidelined for a couple of weeks at the start of the season, then so be it. It’s up to us to deal with that and have a squad strong enough to cope.

Part of that may well be someone like Iwobi, who could benefit from being available when others are not. Which isn’t to put it all on him, clearly there’s more required than a 19 year old who is the fledgling stages of his career, but it might well be an opportunity for him. Anyway, right now he’s part of a 35 man panel that has to be whittled down to 18 (I think), so we’ll see what happens there.

And finally, Arsene Wenger talking about Jamie Vardy’s decision while once more talking up the quality of N’Golo Kante. Imagine Vardy staying at Leicester and then watching on as Kante and Mahrez (surely we must be interested?!) toddle off elsewhere. I’d laugh anyway.

Right, have a good day, enjoy the football, more from me tomorrow.