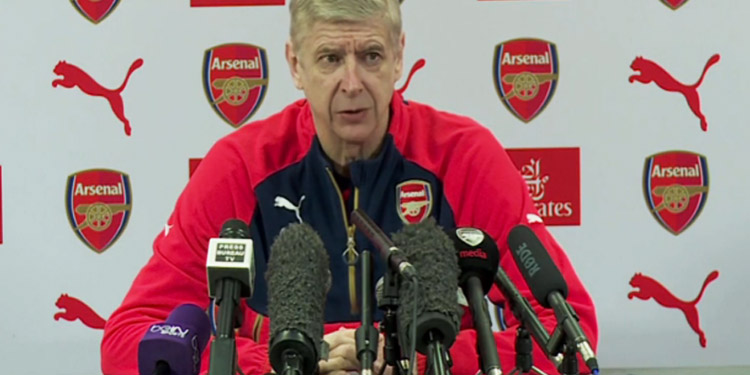 Dreams are very weird. I dreamed I was in LA with Arseblog Tom and he had sex with Madonna. Not in front of me, I should add. Then I was on a bridge with some enormous apparatus and we fished a very bald man out of the river and he lay there opening his mouth like a fish out of water. Most odd.

Anyway, how about a quick round-up of what’s going on? Yesterday, we got the story from The Times about how Arsene Wenger was to be offered a new deal at the club. Asked about it at his press conference, he shot it down emphatically, saying:

That’s completely wrong and I don’t know where this information comes from. You can treat that as just an invention. Another one. It’s absolutely false.

And I would like this press to check the information before they give it out because they could have checked with the club or with myself and we’d both have denied it.

The journalists in question, Matt Hughes and Matt Dickinson, are unlikely to have made it up for a laugh, so if Wenger is denying it, and the offer hasn’t been made, where did the information come from? It can only be from a source close to Stan Kroenke, referenced a number of times throughout the piece, in order to put a bit of pressure on the manager to make a decision about his future.

Is it someone on the board at Arsenal who has had a word and given them that info to run with to make it a public issue? I guess only they can answer that, but it seems the most logical explanation. The idea that a decision is needed by October is, perhaps, a way of saying ‘We’re aware things are tricky now, but buy some good players and the start the season well and the waters may well be calmer.’

If that is the case, it seems very clumsy. Pressed further on his future by James Olley of the Evening Standard, Wenger was a little more open. Transcript follows:

I know you’ve knocked down the contract story, but will it make it harder to sign players if they don’t know whether you’re going to be here beyond next season?

Have you decided what you will do, privately, beyond next season?

What will determine that?

What I focus [on] is to respect my contract and after [I’ll] envisage what I do after. I can understand that people are interested in that but that’s not the most important. I think I’ve extended my contract at a period when it was vital for the club and after that I will see where I am personally and where the club stands at the end of my contract.

So, to rephrase that slightly…what happens next season will determine whether you stay or not?

Of course, yeah. You sum it up very well.

Whatever his intentions, Wenger is clever enough to know that now is not the time to talk about extending his contract. After we sign a load of good players in the summer? Maybe. Now, at the end of a season which has frustrated and disappointed in equal measure, absolutely not.

The thing you might wonder about it is if, with this leak and this piece in the Times, there might just be the hint of some dissonance between the manager and the board. Not much, because I think if Wenger was offered a new deal tomorrow, Kroenke would be quite happy for him to sign it, but there’s just a smidgeon of something that might develop over time.

Whatever happens, we know he’s going to be in charge next season, where it goes from there is anyone’s guess. I don’t even know if we can read anything into what he does this summer – it might be to build a team to win things and thus get an extension; it might be to leave a cracking group of players for the next man to come in and work with. Time will tell.

Meanwhile, the manager all but confirmed the departures of Mikel Arteta, Mathieu Flamini and Tomas Rosicky, but wasn’t sure which, if any of them, would be involved tomorrow against Aston Villa. Flamini is apparently nursing an ankle problem, but I’d really like the other two to be part of the squad if possible.

I don’t think they can start, we do have a game to win – and remember it’s one that could have hilarious consequences if results go our way. However, if the scoreline is right, it’d be a nice thing to do – and the right thing to do – to give Arteta and Rosicky a last run out in red and white.

There was also a classic Wengerism when he was asked if they were definitely leaving. His reply, ‘That depends what you mean by definitely!’ is fantastic. If only there were a book which had specific definitions for words that we could check out.

If you’ve hit the weekend and not had a chance to listen to the podcasts this week, you’ve got five days of Arsecast Extras to catch up with. Find them all on site here, or get them via our Acast page, or subscribe on iTunes. Thanks to everyone for listening all week long and for providing us with some excellent questions and topics for discussion. And some mental ones too. We like them.

Finally, good luck to the Arsenal Ladies who face Chelsea in the Women’s FA Cup final at Wembley today. If you fancy following, Tim Stillman will be doing a live blog from the game – check it out here, updates will begin automatically. Fingers crossed they can bring home the silverware.

Right, have a good Saturday. Catch you all tomorrow for the final game of the season.