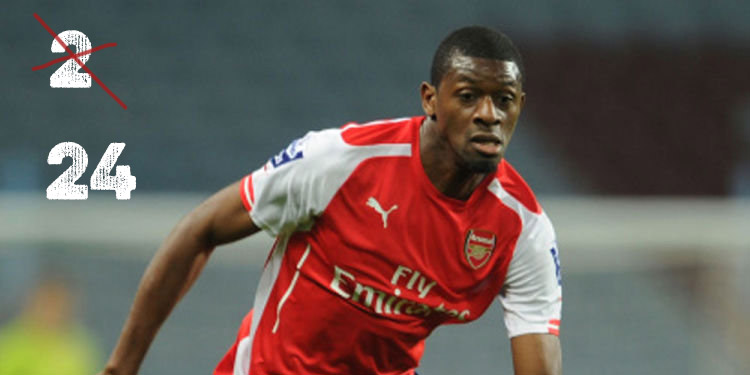 Good morning. What a week it’s been everyone. Not only did we sign a player for tens of millions of pounds, we also got two shirt number changes.

I know I’ve mentioned this before but people’s interest in shirt numbers is enormous. I don’t really understand why but then I don’t understand a lot of things. Like ham and pineapple on pizza, why anyone likes any of the new James Bond movies, or how to put together flat-pack furniture (the instructions literally make no sense to me), but to each their own, I say.

Still, we cannot escape the fact that shirt number stories are remarkably popular. Quite coincidentally, Tim Stillman’s column this week is about that very thing, and over the years of doing a website like this you come to understand what it is that people want.

Without wanting to go all Buzzfeedy and listy, here are the top 5 things that people are interested in on Arseblog. And obviously I can only talk about Arseblog, rather than being something that’s true of other Arsenal websites, but I wouldn’t be surprised if it were similar elsewhere.

Fairly obvious this, from players coming in to players going out, rumours, gossip, the whole lot. People are mad for transfers. Obviously there’s a lot of chaff to find the wheat in these stories, beyond the ones that aren’t a definitive arrival or departure.

Over on Arseblog News, we run a Poo-o-Meter in which we rate the rumours that we cover – and we are quite selective about the ones we do. A 1 poo means this is a solid story, 10, well, think 15 pints, a curry, and then a kebab some time later because you’re so drunk you forgot the curry.

There’s far more interest in who is coming in rather than who is going out, and a touch of fatalism too. There’s no way we’re going to sign anyone good, but the vaguest hint of one of our good players leaving and it’s practically a done deal.

As mentioned above, shirt numbers grab people. This week Alexis has changed from 17 to 7, while yesterday Aaron Ramsey moved from 16 to 8. It’s understandable that people are invested in their favourite players, if they’re going to spend all that money on a new shirt and have a name and number put on the back, I get why.

Yet one of the biggest stories we ever had over on Arseblog News, ahead of big money signings and everything, was Abou Diaby moving from 2 to 24. Hardly the most earth-shattering change, but it got more page views than almost any other post that year.

After every game we do player ratings. Sometimes they’re serious, sometimes not so much, but they spark plenty of interest and debate. We have a system where people can leave their own ratings, and we display an average from the readers.

What’s interesting is that when we win, the average rating from readers is usually +1 over my initial ratings, and when we lose it’s usually around -1 harsher. The best bits are when people comment to complain about the ratings we dish out.

“I can’t believe you’ve given Wilshere a 5. That’s absolutely ridiculous. Shame on you,” like it matters in any way what number a chap on website gives a player after his performance. It’s just a bit of post-game fun. Or not. But it’s not important.

After all that comes the actual football. People read the match reports and, of course, follow the game on the live blog. Combined those two things are hugely popular. Initially, the live blog was designed to allow people who couldn’t watch the game to keep up with it in real time.

We had all kinds of problems with the system until Tom found the right combination of code:

But quickly it became apparent that while it was of use to people who couldn’t see it on TV or find a stream, the vast majority of people were both watching the game and using the live blog. So they have it on TV, and on their phone, tablet or laptop, are reading the live blog. They’re also using the chat facility to, if this doesn’t sound too wanky, enhance their digital matchday experience.

It does sound too wanky, but I can’t think of any other way of saying it. There are the ‘ooohs’ and ‘aaaahs’ and ‘OMGs’ as people from all over the world watch a football game, but also add some interactivity to it. Like it or not, the way people are watching football has changed. Even some of those inside the ground, once they can get some coverage, Tweet about what they’re seeing. This is kinda like that, but with sofas.

The Arsecast began back in 2006, making it a veritable grandfather in the podcasting world. From the get-go it proved popular, and the fact that podcasts have had a bit of a ‘blogging’ moment recently has made it even more so. By that I mean, for a long time when you said you had a blog, you had to explain what a blog was. Now, everybody knows.

There’s still a bit of ‘What’s a podcast and how do I get it?’ but not as much as before. I was trying to work out how many downloads/listens it will have done in its lifetime, and it’s difficult. I’ve only really had accurate stats for about the last two years, and in that time we’re looking at around 14,000,000 downloads/listens, so extrapolating from that and taking into account it had to grow from inception in 2006 to what it’s become now, the answer is I don’t have a goddam clue.

But it’s quite a lot, and thank you all for listening. An interesting point on that is that although we have the Friday & Monday schedule during the season, the live episodes we do get about 40% more listens than a regular episode.

I think we will try and do some more live ones, in London and maybe a Dublin one too, because that would be much handier for me!

Righto, there you go. So a little insight into what connects with Arsenal fans on this site anyway. We’ll have whatever news breaks throughout the day over on Arseblog News.

I’m back tomorrow as usual.