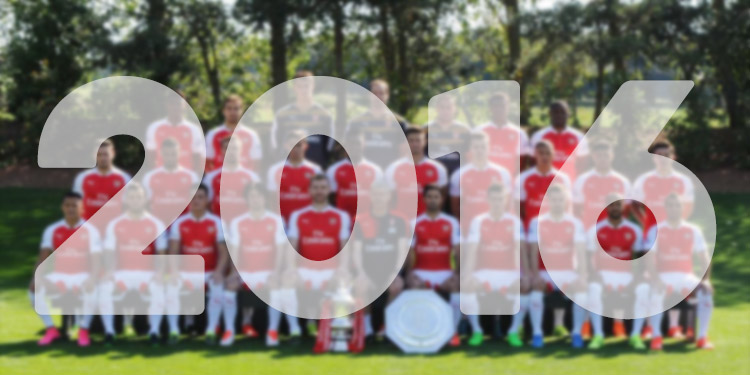 Just a note that I’m using the grading system we have in school where A is the best, obviously, D is a passing grade, and anything below that a fail. I’m trying to combine their performances with their overall influence, and how the season went for them. Their marks are individual, based on expectations of them, rather than comparable with teammates.

Petr Cech: You’d have to say it was a solid first season for the former Chelsea keeper. A few worries about his near post, but overall he brought quality and authority to the squad. Won the Golden Glove outright. B+

David Ospina: Did well almost every time when called upon, although a Champions League clanger put us under pressure in the early part of the season. B-

Hector Bellerin: One of the bright spots of the season, consistent and exciting at times. It was good to see him build on last season’s breakthrough. A

Mathieu Debuchy: Dismal when he played, showed no desire to fight for his place at all, and agitated for a move from before the season even began. A goner this summer. E

Calum Chambers: When he did play, I thought he played quite well – that Leicester game in particular stands out. However, he didn’t really play very much at all, you do wonder if the manager has sufficient faith in him. D

Per Mertesacker: He’s usually very reliable, but had shaky moments this season. That’s true of our defence in general, but he won’t look back on it as one of his best campaigns. C

Laurent Koscielny: Developed a worrying tendency of turning his back on shots but overall was our best and most consistent central defender. B

Gabriel: He looked the part between January and May last year, but hasn’t really kicked on from there. He does some good stuff, but remains too easy to expose. Stories about communication issues emerged more than once, suggesting he needs to work harder in that regard too. C

Nacho Monreal: Like Bellerin, one of the season’s most consistent performers. Firmly established as first choice now, defensively solid and contributes well going forward. He had a good year. A

Kieran Gibbs: Just 3 Premier League starts, and only 13 over the course of the entire season. To his credit he didn’t moan or complain, and got a very important goal against Sp*rs, but would be no surprise if he looked to move on this summer. D

Francis Coquelin: A revelation last season, not quite so much this time around, and he was hit by a knee injury which kept him out for months. C

Santi Cazorla: Like Coquelin his campaign was derailed by a serious knee injury and then an Achilles problem. He’s been left out of Spain’s squad for the Euros, which will be a huge disappointment. We missed him badly though. C

Mathieu Flamini: Had a brilliant night at White Hart Lane, scoring twice in the Capital One Cup, but overall showed that desire and ‘wanting it’ and pointing at things aren’t really sufficient. D+

Mikel Arteta: “You have to be honest with yourself,” he said this week. “For me, the standards you need to play for this club – it cannot be eight out of 10. It has to be 10 out of 10. When you cannot deliver that, it is not good enough.” When he played it didn’t go well, and then he just didn’t play. His final touch as an Arsenal player, scoring that goal, was some kind of redemption though. E

Alex Oxlade-Chamberlain: A season in which he was supposed to take a step forward ended up being one where he went backwards in a big way. The goal in the Community Shield should have been the start, instead it was all downhill from there. So much so stories abound we’re willing to let him go. E

Jack Wilshere: It’s very difficult to give him any kind of grade, because he’s barely played. On the basis of his fitness it’s a gigantic F, but other than that an N/G (No Grade). Has to prove he can be relied on because the talent and ability is there, but the body lets him down.

Aaron Ramsey: More and more he feels like a Goldilocks player, where everything around him has be to ‘just right’ for him to perform. Had chances to reaffirm his position in the centre of midfield, but remains unconvincing in there. His best performances came from the right. D+

Tomas Rosicky: Like Wilshere, he’s impossible to grade simply because he hasn’t played. So he fails on fitness, but that aside there’s little to judge him on. It’s a genuine shame his final season played out in such a way. N/G

Mesut Ozil: The creative hub of the team and while some still have issue with his style, when you end up with ‘just’ 19 assists from 146 chances created in the Premier League alone, it speaks to issues elsewhere that have to be solved this summer. A+

Mohamed Elneny: The January arrival took a few weeks to acclimatise, but has become a regular part of the team. It will be next season before we can really assess him properly, but so far so good. C+

Olivier Giroud: Ends up with his best ever goal haul of 24 in all competitions, but that mid-season drought was damaging to him and us. A better player than given credit for, should be a plan B/depth option however. The search for a striker this summer is imperative. B-

Alexis Sanchez: Disappointing by the standards of his first season, but understandable to an extent given the circumstances when fatigue and injury impacted him in a big way. Still ended up with 17 goals. C

Theo Walcott: Given the chance to stake a claim up front, where he’s said he wants to play, he began well but faded badly as the season went on. Lost his place there, played poorly out wide, ended up doing this kind of thing, and it feels like a decision has to be made this summer. D

Alex Iwobi: It’s dangerous to overhype young players, so while there’s clearly lots of talent there, it’d be worth exercising a little caution. A wide forward should be on our list of summer purchases, and he can develop as squad player next season. C+

Joel Campbell: Performed above and beyond where people expected, yet remained expendable in the eyes of the manager who continually ditched him throughout the season. A conscientious, hard-working player with some end product, but it wouldn’t be a surprise if he left this summer. B

Danny Welbeck: Made a genuine impact when he returned from injury, and brought something different to the forward line. Got some goals, but the knee injury at Man City was a cruel blow to a player who deserved better. C+

What strikes me is that beyond Ozil’s creative contribution, and the consistency of the two full backs, very few players performed above average. Many, while not failing completely, didn’t contribute as much as they, or we, would have liked, and ultimately that was a big part of why results and performances were not at the required level.

Last season it felt like we’d found a nice balance to the team and the kind of football we were playing, but this time around it was much more difficult to understand what we were trying to do and how we were trying to do it. It felt less like a team and more like individuals struggling to come together in any cohesive way. As much as signings are necessary this summer, and they really are, we have to find an effective style of play that everyone seems comfortable with.

As ever when rating players there around bound to be discussion, disagreements and debates, so feel free to chime in on the Arses if you fancy.