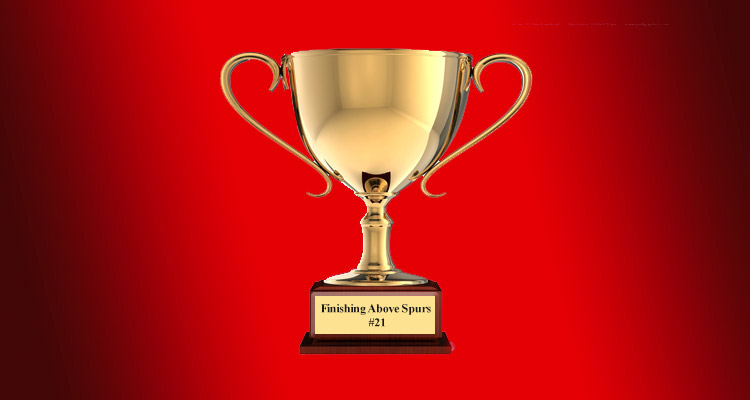 Morning. Still laughing? Of course you are. I find my laughter is rekindled whenever I see or hear a grumpy pundit who tries to suggest that Arsenal finishing second above Sp*rs is nothing to be celebrated.

There are only two possible explanations for this point of view. 1 – In a sea of opinion they’re trying to stand out by saying something they know will wind people up. 2 – They simply do not understand being a football fan. I like to think that the majority are of the first order, because at least that – as pathetic as it is – has some basis in common sense.

If they can be ‘provocative’ and ‘edgy’, holding controversial opinions for money (to coin a phrase), then they might garner more clicks and views and whatever else, and this is something the people that pay them want. So, in that sense it’s understandable why they would speak or write in such a way.

If it was the second thing, then you’d be very worried because professional people whose job it is to write about the game we all love just have no idea what fans think and experience. That they would be so far removed from the reality of a situation like the one we saw on Sunday suggests they ought to find a different career, because it’s the equivalent of a surgeon knowing how to open up a patient but having no clue how to close them up again.

It’s fundamental to our enjoyment of the game, and the coverage is typical of the inability, or refusal, to understand that things can operate on many levels. Of course for an Arsenal fan the main driver of a season is to win something. The Premier League, the Champions League, the FA cup etc.

Any pundit critical of, or scoffing at, celebrations for finishing second clearly hasn’t been paying any attention at all this season, because until Sunday there were very few people suggesting that we’d had a great campaign. Criticism and disenchantment has been rife throughout 2016 in particular as we slipped away from Leicester, so to make out that all of a sudden there’s overwhelming joy at at the way everything went is simply wrong.

Let’s be very clear about this: Arsenal fans were celebrating the fact we finished above Sp*rs because it was a) unlikely for so long, b) unbelievably hilarious in the way it happened. 2 points from their final 4 games, losing 5-1 to relegated 10 man Newcastle, and c) because it was all we had left from this season. We can admit that, but that doesn’t mean it’s still not funny or enjoyable. That one thing is funny.

It doesn’t make the rest of the season wonderful. It doesn’t change the fact we’ve underachieved by the standards expected. It doesn’t mean everything is now rosy in the garden and there isn’t still work to do. It doesn’t mean that finishing second we’ve challenged properly for the title. It doesn’t mean we get the ‘Finishing Above Tottenham’ trophy. It doesn’t alter the fact that when it comes right down to it, they were closer to winning the title than we were this season.

But keep building those straw men, and I will knock them right down. If a pundit claims not to, or simply doesn’t understand, how taking pleasure from getting one over on your local rivals is a fun thing, then I don’t know why anybody should pay attention to anything they have to say one way or the other.

It’s just pure ‘whataboutery’. You can enjoy one thing and be concerned about the overall situation. But not every single little thing has to be subject to microanalysis and deconstruction. Sometimes you just have to take it on its own merits, and if those merits involve that lot capitulating in hilarious fashion on the final day of the season to allow us to finish above them, then you’re missing out if you can’t let yourself take the good from it.

In the meantime, hahahahahahaha, because you know, it’s still funny.

Further to his emotional send off on Sunday, it seems Mikel Arteta has more or less made up his mind to retire from football. There’s some really excellent stuff from him in this article, including a fairly brutal assessment of his own ability to play and contribute for Arsenal this season. It’s rare to see such honesty from a player.

He does have an offer from Arsenal to coach at academy level, apparently, and his former teammate Mauricio Pochettino fancies him for a role at that place he is, but the smart money is on him joining Pep Guardiola’s coaching team at Man City next season. I’m in the middle of reading Pep Confidential, which is a really fascinating look from the inside of his first season at Bayern Munich, and from an educational point of view it would be an amazing opportunity for Arteta.

It seems clear he has ambitions to become a manager at some point, and having worked under Arsene Wenger for five years, knowing his methods and techniques, the chance to work alongside Guardiola must be very, very tempting. The precision and detail with which he works is really something else, and if you wanted to develop your coaching skills and understanding of the game, there’s really no choice between that and doing some time working with youth players at Arsenal.

If he does go there, it’s a move nobody could begrudge him of, and good luck to him if that’s what he decides to do.

The England squad has been announced for the European Championships, and it’s good for Jack Wilshere, who was selected, but bad for Theo Walcott who was not – while the likes of Andros Townsend and Marcus Rashford have been chosen ahead of him.

Wilshere’s inclusion is no surprise, even if he’s been barely fit this season Roy Hodgson was always going to take him. From an Arsenal point of view, worries about his fitness are irrelevant really. He’s hardly played, of course, so there can be no issues with fatigue, but concerns about how he might hold up can only be allayed if he plays football.

If he goes to France and does well, then that’s a good thing for us. If he struggles or breaks down again, then it was as likely to happen with us as it is with England, and that then would have to affect how we view him and our midfield next season. Hopefully it’s the former though. Also, the stick he’s getting from some England fans is pretty amusing.

As for Walcott it’s not quite a wake-up call, but to be left out for Townsend and a rookie like Rashford should give him pause for thought. It really feels like it’s gone stale for him at Arsenal, a change of scenery might well be the best thing for him and for us this summer. And it wouldn’t surprise me one bit if that happened.

And almost lastly, if you haven’t yet seen our kits for next season, an unfortunate error down-under saw them put on display in Sydney, before they were hastily removed from the racks. Not before an eagle-eyed Gooner had taken a picture though, and you can see the Arsenal home and away kits for next season right here.

Right, there you go. Later this week, the traditional end of season review post, and all the rest. Tactics Column to come later, more from me tomorrow.