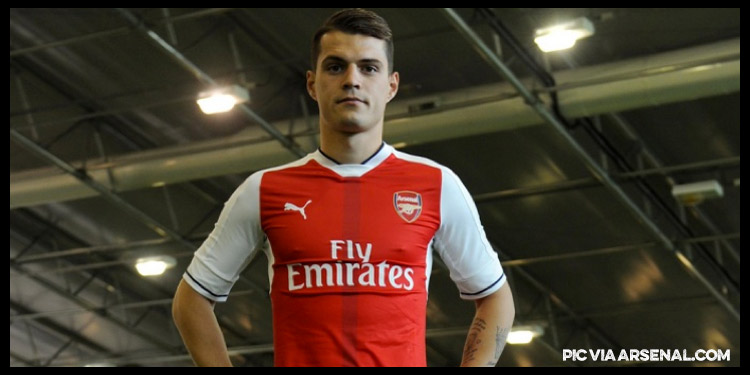 So, in a move that surprised absolutely nobody, Granit Xhaka became our first signing of the summer yesterday. The Swiss international moves from Borussia Monchengladbach for a fee believed to be in the region of £25m, rising to £30m+ with add-ons.

The midfielder becomes our third most expensive player of all time – behind Mesut Ozil and Alexis Sanchez – and adds some qualities that have been missing from our midfield. In terms of his passing, he looks like he can fill the gap that Arteta left, the ability to spray the ball from deep positions will be, I’m sure, a big part of why Arsene Wenger brought him in.

But from his first interview it’s impossible to ignore the fact he clearly wants to get stuck in and provide some bite. He said:

I’m an aggressive player and also a leader. Arsenal how has one more player who knows how to fight.

And on English football:

It’s aggressive and I like the way Arsenal play football. In Germany you can play aggressively but the referee will always blow his whistle, but in England that’s not the case. That’s better for me.

Now, perhaps he thinks England is a magical land where you can boot the opposition all over the place, but he might find, rather sadly, that generally only applies to whoever we’re playing against, while our chaps get booked for sneezing too loudly. Still, I’m sure somebody will have a word and just let him know that he may just have to control himself a little.

Not too much though. Despite 5 red cards in the last two seasons, adding some genuine aggression to the midfield and the team is a delicious prospect. There is often an idea that players who like to get stuck in are doing so because they’re making up for a lack of talent, and in some cases that is definitely true. However, you don’t have to think too hard as an Arsenal fan for players who can play and also have that bit of an edge to them.

While not wanting to raise expectations too high, or compare him to these guys in any way, Dennis Bergkamp and Patrick Vieira were both wonderful footballers but no pushovers either. There is a perception that this Arsenal team is just a bit too nice, lacking some of the required cynicism and truculence that is necessary in certain games, and from what he’s saying that’s something he can address.

I’m most definitely looking forward to seeing a player who will not take any shit, and if he can spark a bit more ‘fight’ amongst his teammates, then I’m all for it. There are times when we are maddeningly passive when you’d love to see us react a bit more. Think of Alexis being pushed into the pit at Norwich, or that game a couple of seasons ago when Arteta was stuck in the middle of a group of opponents and nobody came to back him up. A bit of not standing for that kind of thing from Granit Xhaka would go a long way, I think.

Granit Xhaka is an exciting young player, already with good Champions League and Bundesliga experience. We have been watching him for a long time now and he is a player who will add quality to our squad. We wish Granit a good Euro 2016 with Switzerland and look forward to welcoming him to Arsenal ahead of next season.

Apparently the first contact was made a year ago, Wenger phoning up the player who said, “I was almost speechless when he called.” He clearly holds the manager in some esteem, and you can find some other quotes which emerged from the Swiss training camp here.

To get an idea of him as a player, you can check out the video here, and overall you have to say that’s a very positive start to our summer. It’s still May, of course, and there’s plenty of time to get things done, but those things still need to be done. There are links already to Napoli’s Kalidou Koulibaly, a centre-half of growing repute, and talk that we’re negotiating with a striker – don’t know who that is though.

Some of the names mentioned include Gonzalo Higuain, Romelu Lukaku (who says he wants to leave Everton), Alvaro Morata and his rather complicated ownership arrangements, and others, and it is difficult to identify top talent who might be available this summer. It wouldn’t surprise me in the slightest if we got a signing out of left field in this area, maybe it will be one of those names, but Arsene does love an under-the-radar purchase – a 2016 Eduardo perhaps. We’ll see.

Still, for now we can bask in the warm glow of an actual real life signing, our second central midfield player in the last few months, and we have all summer to try and work out what the manager’s going to do there when the new season begins. The fact that he’s brought in two 23 year-olds suggests some planning and strategy, which is nice, and when you look at what we’ll have to choose from next season, it’s shaping up to be pretty tasty.

Finally for today, it’s 27 years since Arsenal went to Anfield and won 2-0 to take our first title since 1971. I know 27 years isn’t exactly a landmark figure, but it’s always nice to watch this again.

Have a good one, Tim Stillman will be here with his column later today, more from me tomorrow.