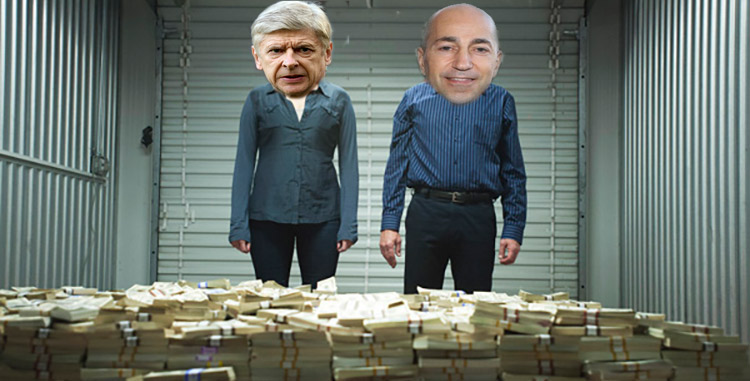 Good morning, it’s getting quiet now. The cold winds of summer whip over the hills of no football and we anxiously await the announcement of a Swiss bloke.

I thought I’d spent some time working out hilarious anagrams of Granit Xhaka’s name but the X pretty much makes for poor returns. The best I have is Ghana Tax Irk, which might be relevant to some of our African readers – Hello Ghana! – but not much beyond that. However, ‘Granit Xhaka Arsenal’ gives you ‘A Lasagne Anthrax Irk’, which probably brings back some terrible memories for Sp*rs fans re: 2006 and that final, brown-trousered, day of the season.

Speaking of Sp*rs, their thrashing on the final day of this season by already relegated, 10 man Newcastle meant that we pipped them to second place and thus became Champions. Not of the Premier League itself, but the Premier League money charts.

We earned a total of £100,952,257 from the Premier League via ‘Merit money’ (where we ended up in the table), money earned from being on TV more than any other club, and the payments made to every club as part of the domestic and international TV deals. That is quite a lot of money, helping to boost our already swollen coffers.

And when you consider that from next season that revenue source increases – with clubs sharing a pot of around £8bn between 2016 and 2019 – the impact it’s going to have on the game will be very interesting. While there have been some concessions to fans in terms of a ticket cap on away games, the likelihood is that the money coming in will see wages and transfer fees increase even further – and in the end those kind of costs are almost always passed on, to some degree, to the fans.

Speaking about this back in February, Arsene Wenger said of this influx of cash:

What will happen is the prices of the players will go up and you will need this supplement of money coming in to buy new players. I believe that the pressure on spending the money will become bigger and you cannot necessarily distribute the money to other people.

Arsenal fans looking at our bank balance right now, the cash in bank and the ‘war chest’ we have at our disposal this summer will want the club to use that resource to its fullest extent. Ticket prices are high, the team has underperformed based on expectations, and in order to improve we need to add quality to the squad. That’s a given (not Shay though, just a regular one).

There’s already pressure on the manager and the board to use that money on the team. We know that having a load of money in the bank doesn’t win you any points on the pitch. Exactly how much we have to spend is not easy to decipher, but it is a lot. Ignore that recent report whose figures had people up in arms, Arsenal have plenty to spend this summer if they choose to do it.

But the pressure doesn’t simply come from internal sources like the fans. Of course our priority has to be on our own strategy (hah!), but when you consider what else is going to happen this summer, you can’t help but worry about the prices inflating significantly and the competition for the best talent becoming quite fierce indeed.

We know that Jose Mourinho is going to take over at Man Utd and the only way he’d agree to that is if he had a load of money to spend. That’s how he works. He spends lots of money on [Jorge Mendes] players. Pep Guardiola is coming to England and will have to do plenty of work on a very average Man City squad to make them stronger. He is going to be very active in the transfer market.

There’s a new manager, Antonio Conte, arriving at Chelsea whose task is to get them back into the top four at least. Spend Spend Spend, because they’re rich. Jurgen Klopp will have his first summer at Liverpool and if they have ambitions of Champions League and beyond, he is going to have to splash the cash. West Ham are already waving their wads of cash around to fill ‘their’ new stadium with better players, and so, along with every other TV cash rich club in the Premier League, I reckon you’re looking at a summer in which record amounts of money are going to be spent by English clubs in the transfer market.

While every club will have their own targets, there are only so many top quality players out there, which suggests there’s going to be an amount of crossover when it comes to the top clubs. In the end that simply benefits the selling clubs and the players/agents involved, because they can use the interest to drive up the fee and the personal terms on offer.

Which isn’t to say Arsenal shouldn’t be involved or anything, we have to be, but looking on from a distance it’s all going to make for a very, very interesting summer. Perhaps a frustrating one too, at times, and there’s also just a feeling that the Premier League is spending its way into a bubble. I’m sure those more well versed on the economics of all it could say if there are parallels between the cost of players and house prices (in metaphorical terms, obviously), but it all feels a bit familiar.

Transfer fees go up, players wages go up because ‘If I’m a £40m player I want £40m player wages’, and other transfers are based on those fees. ‘Well, if Cristian Benteke cost £32m, this actual good player is going to cost a lot more than that.’ And so it goes.

To be fair, there were probably similar concerns when Trevor Francis became the first £1m player back in 1979 – but would it be a surprise if we got the first £100m player in the not too distant future? Anthony Martial could cost Man United close to £60m, depending on what he achieves there, and that was for a kid of 19.

Alvaro Morata is a promising player but far from the finished article, and a price tag of £40-50m is being widely quoted for him. What is it going to cost to buy established, proven talent this summer?

Anyway, as I said, it’s going to be quite the off season, I think. I doubt we’re going to top the Most Money Spent chart, but I hope we’ll push the boat out for once – because you can be quite sure almost everyone else will.